Six workers wearing hazmat suits, full face respirators, and two layers of gloves jumped out of a truck and prepared to enter a small office building at 9 p.m. one evening in mid-March. Bill Ciaccio, a 40-year-old operations manager for biohazard cleanup company Aftermath Services LLC, had gotten a call about a confirmed case of the novel coronavirus a few hours earlier. The business, hoping it wouldn’t have to cease operations for too long, needed its offices disinfected right away.

Ciaccio first advised the client on how to prepare: Clear out all employees and wait a few hours to let any airborne particles settle. Then Aftermath’s crew arrived with a custom mix of disinfectants and red biohazard bags. “We set up zones,” Ciaccio says. “The control zone is the area being disinfected, the buffer zone is the entryway. Then there is the clean zone,” he says, where workers carefully peel off their gear and put the red bags into cardboard boxes. By 4:30 a.m. the squad had disinfected the entire space.

Biohazard remediation work is exploding as the number of confirmed Covid-19 cases in the U.S. reached almost 50,000 as of March 24, accounting for 615 deaths. Globally, the outbreak has expanded to more than 399,000 cases in 166 countries. The pandemic is keeping companies such as Aftermath busy 24/7; its caseload has grown to about 50 confirmed Covid-19 cleanups a day. The wave began earlier this month when businesses wanted preventive cleanings amid a shortage of tests to know if employees had the virus. Aftermath says the overall U.S. market for biohazard cleanup services, between $700 million and $800 million in 2019, is expected to more than double this year.

“It’s crazy, I’ve never seen anything like it,” Aftermath Chief Executive Officer Doug Berto said in a March 13 interview. The current outbreak is far more extreme, he says, than the pandemic that inspired the company’s founding in the 1990s—the AIDS crisis. Fortune 50 companies have called on Aurora, Ill.-based Aftermath, covering a range of industries, from sports franchises to food service and restaurants. Municipal buildings, police departments, and other public service agencies are also among Aftermath’s clients, which Berto declined to name. 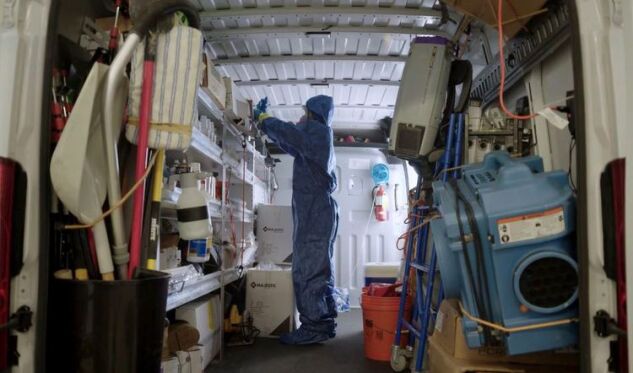 Responding to emergency cleanups requires skilled people—second responders who work closely with law enforcement—protective supplies, and extreme caution. Workers, Ciaccio says, are putting themselves “in harm’s way on a daily basis.” As demand is growing, so too is the company. Aftermath, which has around 275 employees in 50 locations and 100 mobile units, recently increased its staff by 15%.

Another provider, New Jersey-based ACV Enviro, has also seen demand spike. “Originally it was transportation hubs, then next was a lot of the large utility companies,” says Donna Miller, vice president for health and safety, describing the rush of service requests. ACV has about 650 to 700 trained field staff, and Miller says that number could triple in the coming months.

The cleanup costs can add up. Aftermath’s hourly rates range from $750 to $1,000 for a team of three to four people, or anywhere from $1 to $10 per square foot. With an estimated 71 billion square feet of commercial real estate in the U.S., the price of disinfecting businesses could eat up almost all of the $850 billion in financial assistance for businesses, cities and states now being weighed by the Senate, part of a $2 trillion coronavirus stimulus plan. That’s if institutions clean only once. The rapidly spreading disease suggests some businesses will require more than one cleanup. Businesses that close down could forgo such services and expense.

The figure doesn’t include waste disposal costs. Those services, which are typically outsourced, add 20% to 35% to the total cost of any cleanup, Berto estimated. But there are ways to mitigate the burden. Ciaccio says that with large sites, internal video footage can be used to track where coronavirus-infected employees have been and to target specific areas for cleaning. That can “save work when you have a million square feet.” The cleanup team also interviews people to try to narrow down hot zones.

One challenge for companies like Aftermath and ACV is how best to dispose of the waste from cleanup sites. Treating it like regular trash would save costs but raises big safety issues. The company is looking for clarity on the issue, to be decided between the Centers for Disease Control and OSHA. The agencies did not have immediate responses when contacted for comment about their guidelines.

Stericycle Inc., an Illinois-based company that disposes of medical waste, says it hasn’t seen an increase in Covid-19 waste yet, partly because hospitals have put elective surgeries on hold. That’s also partly due to the nature of the disease: “This isn’t the type of virus that’s creating waste from patients themselves,” says Selin Hoboy, Stericycle’s vice president for legislative and regulatory affairs. “There’s not a lot of blood or bodily fluids being generated like we saw with Ebola. It’s mostly personal protective equipment.” Coronavirus waste goes through the company’s autoclaves, or steam-cleaning sites, and most of it is later buried in landfills. Only some waste containers are sturdy enough to be recycled.

“The way this thing is spreading is truly like wildfire, and we need to take every action to prevent the spread from happening,” says Vikas Chopra, marketing director at Aftermath. “We want to do our part to flatten the curve.”

To contact the author of this story:
in New York at tkary@bloomberg.net

To contact the editor responsible for this story:
at dkessenides1@bloomberg.net