Health-care workers and others essential to the Covid-19 fight say they’re increasingly frustrated that they’re being sent into a deadly battle without the protective gear they need for themselves and their patients.

Tensions are particularly high in New York, where the number of coronavirus deaths has passed 1,000. Seven members of District Council 37, representing emergency medics, nurses’ aides, respiratory therapists and others in the city’s hospitals, have died from the virus, according to the union. But the concern is nationwide: The country’s largest nurses’ union has filed more than 125 complaints with federal workplace safety regulators alleging dangerous working conditions in hospitals.

“We are the richest country in the world and yet we can’t protect our health-care providers when fighting the deadliest virus we’ve dealt with in most of our lifetimes,” said Ryan Stanton, an American College of Emergency Physicians board member who works at a hospital in Lexington, Kentucky. “There’s a significant level of distrust with physicians and nurses and others because we feel the requirements and suggestions for PPE are being downgraded because of availability and not because of science.”

While much of America’s professional class works remotely from home, most medical and emergency workers must show up in person to do their jobs. They say their lives are being put at risk in increasingly difficult situations and see no end. Statistics from China and Italy back them up: more than 3,300 health-care workers in China were infected by early March, and in Italy, 20% caught it, according to an editorial in The Lancet.

“Our members are exhausted, they are scared,” Henry Garrido, executive director of DC 37, told press on a call Tuesday. “They continue to soldier on.”

Members of the American Federation of State, County and Municipal Employees, which DC 37 is part of, aren’t to the point of refusing to work, he said. They have called on President Donald Trump to use the Defense Production Act to ensure adequate supplies. 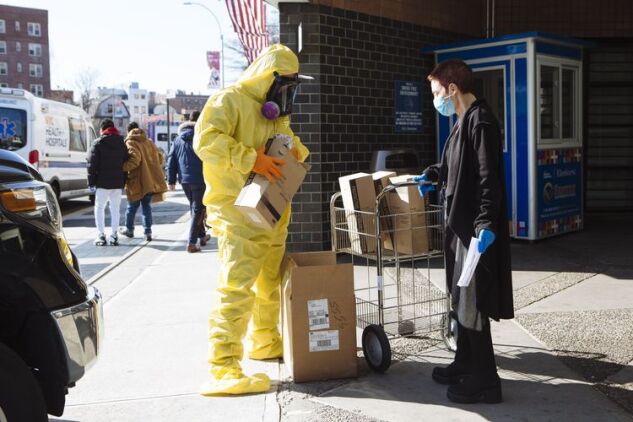 The health-care sector isn’t alone. More and more workers deemed essential and not allowed to work from home are speaking out about the lack of adequate protective supplies like cleaners and masks, and policies ensuring workers are kept at proper distances and paid should they be forced to quarantine. Workers at Amazon and Whole Foods protested work conditions on Tuesday and their own lack of protective gear.

Unionized nurses planned to demonstrate this week at 15 hospitals owned by HCA Healthcare Inc., the nation’s largest for-profit hospital operator. They allege that workers at some hospitals aren’t given sufficient protection, have been punished for bringing their own N95 masks, and were told to continue working after being exposed to the virus, according to the union National Nurses United.

HCA said Tuesday that it’s implemented a universal mask policy that “will help with social distancing and provide additional protection for you and our patients.”

In normal times, respirators and surgical masks would be discarded after every patient encounter, but some now have to wear them all day and sometimes for several days. Karine Raymond, 56, a nurse at Montefiore Health Center in The Bronx, said rules for masks have been changing as the crisis has worsened, leading her to contemplate writing her will.

“Nurses aren’t going to walk out,” she said. “We’re very realistic. We’re doing the best we can. We’re trying hard to try and help these poor souls without unduly opening ourselves up to anything dangerous. If we go down, then there’s nobody left to care for the patients, is there?”

Bloomberg News wants to hear from health-care workers on the front lines. Click here to tell us.

Recommendations on what precautions are needed in treating Covid-19 by the U.S. Centers for Disease Control and the World Health Organization vary, exacerbating concerns. The CDC recommended N95 respirator masks, which can filter out airborne particles containing the virus, but as supplies began to run short, the CDC acknowledged workarounds may be needed.

However, WHO recommended restricting N95 use to procedures such as intubation that are likely to aerosolize the virus. Regular masks that block respiratory droplets are considered appropriate for most others, WHO said.

Hospital officials, whose job it is to prevent the spread of disease within their facilities, say they’re doing all they can in an extraordinary situation. Almost half of hospitals in a survey last week said they were out or almost out of respirators and facing shortages of basics like hand sanitizer and masks, according to the Association for Professionals in Infection Control and Epidemiology.

“Our days are spent frantically searching for personal protective equipment,” said Ann Marie Pettis, director of infection prevention for UR Medicine in Rochester, New York. Infection prevention professionals are having to advise on how to re-use single-use items as at least some measure of protection. “Truly, this goes against everything we have known from the scientific evidence and what we have always taught our staff.” 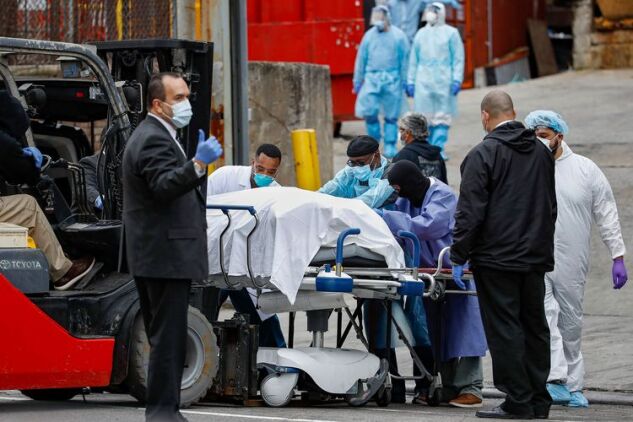 Coroners facing a mounting death toll are also at risk. New York City workers were told in mid-March that N95 masks were in short supply for them as well, even for those working with the dead bodies of Covid-19 victims. Concern has turned to anger as the crisis intensified, said Fitz Reid, a union official who represents some workers at the Chief Medical Examiner’s office.

Most in-hospital deaths can be handled by phone, but for the 30-some city employees who must review how someone dies, when someone dies at home, they have to go to the scene. Examining the deceased includes taking the temperature and rolling the body over. And in cramped New York apartments, it’s often impossible for the investigators to keep the recommended six feet distance from grieving relatives.

These workers have also been told N95s aren’t necessary.

“Investigators will be provided with surgical masks that offer respiratory and ‘droplet’ protection, which shields from coughing and sneezing,” said Aja Worthy-Davis, a Chief Medical Examiner spokeswoman, reiterating that N95 masks are for procedures such as autoposies.

“If one of my members die, how can I go to the funeral? What would I say to their relatives?” Reid said. “I can’t tell them that everything was done to protect them because it wasn’t. The city wasn’t prepared. And I can’t tell them that no one knew what might happen. Because everyone did.”

It’s not just in New York where protective gear is being tightly controlled by health care systems. In Texas, Henryk Nikicicz, an anesthesiologist at University Medical Center of El Paso who has asthma, said he put on a N95 mask in a hallway in mid-March because he saw a group of people approaching and he’s susceptible to infections.

In a text-message exchange provided to Bloomberg News, Nikicicz’s boss -- the medical center’s anesthesiology chief -- said the masks were in short supply and expensive, and that he wasn’t at risk of exposure in the hospital halls.

Nikicicz said in an interview that he was warned he might lose his job over it. “Is that something that’s good for the community and doctors -- an experienced anesthesiologist is fired just before the pandemic is supposed to hit the city?”

A UMC-El Paso spokesman disputed that Nikicicz was fired, saying in an email that he was removed briefly from rotation for “insubordination” and had been told “on numerous occasions” not to wear the N95 mask while not in the operating room or treating patients.

“UMC is not unlike other hospitals in its efforts to conserve N95 surgical masks,” the spokesman said in the email. At the time the incident took place, “the CDC did not require masks (and certainly not N95 masks) to be used by hospital staff when not treating patients.”

Nikicicz said he was told later he’d been reinstated.

in New York at dkocieniewsk@bloomberg.net