A bipartisan group of lawmakers wants to create a $25 billion fund to help states collectively buy Covid-19 tests, a move Democratic supporters say is the best option in light of a weak federal response.

Sens. (R-La.) and (D-Minn.) are leading the push in the Senate for the next virus-relief legislation to encourage states to create interstate compacts for buying testing supplies. The fund they propose could be used by state leaders to obtain tests or set up regional virus tracking systems, according to a summary provided to Bloomberg Government.

The plan, Democratic supporters say, is the second-best option for greatly expanding the nation’s capacity for detecting Covid-19 cases.

“This strategy would be good in the absence of a real federal response,” Rep. (D-Minn.) told reporters. 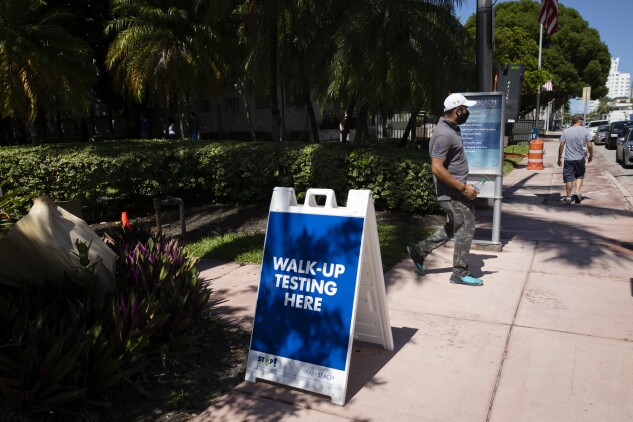 The U.S. leads the world in both the number of Covid-19 cases and deaths. Public health officials say one glaring issue has been the country’s inability to quickly flag new cases.

“We have to identify people who are contagious and help them successfully isolate,” Andy Slavitt, a former Obama administration official who now advises several think tanks, said.

Democratic leaders in the Senate have said they’re pushing for the next virus-relief package to include a national testing strategy. Negotiations on that legislation have stalled.

Some states have already sought to set up these agreements: Louisiana, Maryland, Massachusetts, Michigan, Ohio, North Carolina, and Virginia recently announced they plan to buy 3 million antigen tests together.

Craig said having federal support for these compacts could help more states create them.

The Trump administration has stayed firmly dedicated to having states manage their own testing regimes.

The Health and Human Services Department released state testing plans Monday. The plans noted ongoing concerns about supply shortages and interest in expanding networks of labs and contact tracers, but each state’s plan was unique to its circumstances.

A “locally executed, state-managed, and federally supported” testing strategy has been the Trump administration’s approach to the pandemic since March, the HHS said in a statement earlier this week.

To contact the editors responsible for this story: at sbabbage@bgov.com; at phendrie@bgov.com