Each day, before the 350 employees at Fresh N’ Lean enter the company’s food preparation center in Anaheim, California, they fill out a health questionnaire and have their temperature taken.

Anyone with symptoms, even if they seem like seasonal allergies, is asked to take paid emergency sick leave. Inside, workers are spaced widely apart and wear gloves and masks as they prepare food for delivery. This week, employees just for coming in, since demand for mail-order meals has surged with so many people staying home.

“I take the fact that we’re an essential business very, very seriously, because people not only need to eat, but they need a good source of food,” said Fresh N’ Lean Chief Executive Officer Laureen Asseo, who added that she comes in every day to show support for her workers. “My number one goal is how do we stay safe, and how do we continue to prepare safe food for people.”

By all accounts, Fresh N’ Lean—and other companies to the U.S. economy such as Walmart, Home Depot, Lowe’s and Kroger—are creating a standard for operating during a pandemic. For retail locations, that includes wider or one-way aisles (or both) to keep shoppers farther apart, touchless payments and Plexiglas shields (and sometimes masks and gloves) for cashiers. Store hours are being reduced, and the number of customers allowed in at any one time is limited. All the while, store surfaces are cleaned, and cleaned, and cleaned again.

Under pressure to show they care for fearful employees (and not to mention customers), companies have been devising a playbook that may change the way shopping looks long after the coronavirus has ceased being a global threat. 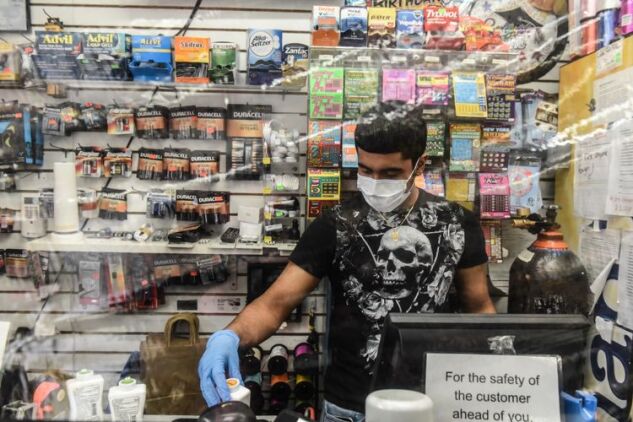 A cashier wearing a mask and gloves works behind a plastic shield in a store in Brooklyn, New York on April 7.
Photographer: Stephanie Keith/Bloomberg

As the outbreak continues to ravage the U.S., spreading from the coasts inland, many people are working from home. Retail workers who have been deemed essential, however, don’t have that luxury. Thanks to shortages of protective gear, a lack of training, and customers and co-workers who venture out despite being ill, they are constantly at risk.

Medical professionals are of course most in jeopardy, and are regularly becoming ill and dying. But cashiers and supermarket clerks are falling victim to the virus, too. From grocery stores and pharmacies to transportation, utility and health-care companies, other workers necessary to keep the economy from collapsing are relying on their bosses to keep them safe.

“There’s always going to be a higher risk for essential people,” said Paul Meechan, a bio-risk consultant who until last September was director of the Office of Safety, Health and Environment at the U.S. Centers for Disease Control and Prevention. “It goes back to one of the basic axioms of safety—that you never get to zero risk. You mitigate it, you manage it to get it as low as you can. That’s where the question then becomes ‘what is essential and how essential are you or that service?’”

So far, there’s little sign the nation as a whole is near the apex of the outbreak. Even as the rate of infection in New York, the virus’s U.S. epicenter, has slowed slightly, hot spots are emerging in Detroit, New Orleans and Miami. As confirmed U.S. infections head , with more than 14,000 dead, the novel coronavirus will inevitably affect more and more employees who must leave their homes to work.

Indeed, while some companies have been quick to tout safety measures, not all essential workers feel their well-being is seen as paramount by management. Employees from Amazon distribution centers in New York City to bus drivers in Detroit and McDonald’s employees in North Carolina have staged work stoppages over . (McDonald’s Corp. said last week that it will allow employees to wear masks and that it is working to supply them.) 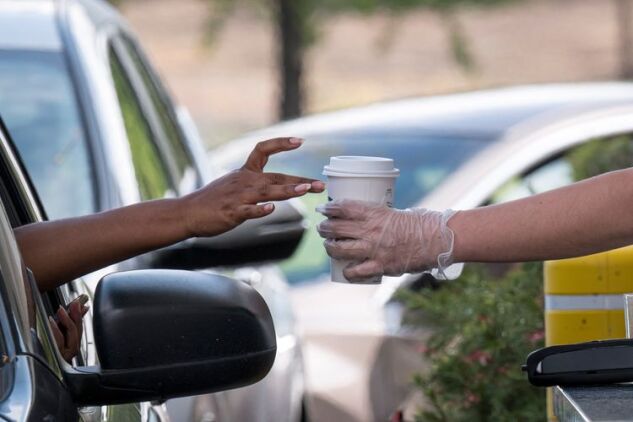 A Starbucks employee wearing gloves hands a customer an order from a drive-thru window in Hercules, California on April 7.
Photographer: David Paul Morris/Bloomberg

A shopper would be hard-pressed to find an operating retail chain or business without a positive Covid-19 case among its workers.

At Stew Leonard’s, a supermarket-chain with seven stores in New York, New Jersey and Connecticut—some of the hardest hit states—several employees have tested positive for the pathogen .

“We are in the middle of a bullseye,” said Stew Leonard Jr., the chain’s CEO.

Leonard said his employees are being offered masks, provided with enhanced sick leave and paid an extra $2 an hour for putting themselves at risk. Workers also must take a 16-question quiz about the virus. More than 500 have taken it so far, with an average score of about 81%. Leonard said the goal is to get the rate above 90%.

With spring almost here, home improvement chains that have been deemed essential are preparing for the usual increase in customers. Home Depot Inc. has opted to skip traditional promotions since they might draw too many shoppers, while Lowe’s Cos. said it will provide gloves and masks to any employee who wants them and said that it’s widening store aisles.

Such measures have made an unlikely winner out of Arlington, Virgina-based FLIR Systems. The company has seen a jump in demand for its temperature scanning devices, which range in price from $500 to as much as $13,000 for more advanced units, CEO James Cannon said. 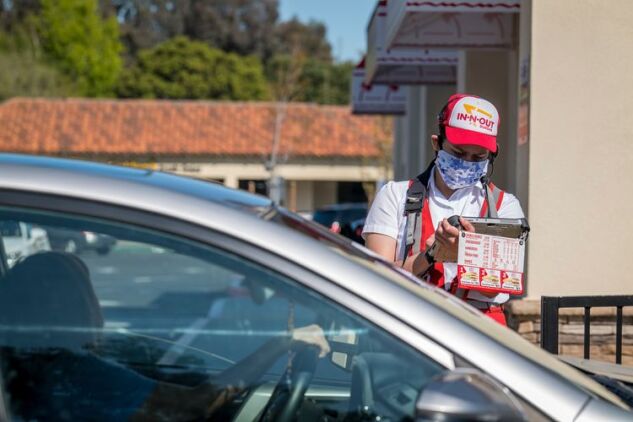 A worker wearing a cloth mask takes an order from a customer waiting in a drive-thru line at an In-N-Out Burger in Vallejo, California on April 7.
Photographer: David Paul Morris/Bloomberg

Looming over efforts to adapt to the virus is the need for constant sanitizing, said Patty Olinger, executive director of the Global Biorisk Advisory Council (GBAC), a group that advises on biological threats and mitigation. GBAC oversaw crews that sanitized planes carrying Ebola patients in 2014 and 2015, and more recently cleaned cruise ships with Covid-19 outbreaks and planes that airlifted Americans out of Wuhan, the Chinese city where the virus first emerged.

She says that existing technology is already being brought to bear in the current crisis. Chemical foggers, some developed to fight Ebola, are being used to sanitize locations after a confirmed Covid-19 case, she said. Cleaning robots used to wipe down floors can be modified to reach high touch-points, helping ease the load on cleaning crews.

“There are some amazing technologies that have come on board in the last five years that really make a difference,” Olinger said. “What this pandemic is going to do is catapult us into that new technology, and that new philosophy.”

Oscar Munoz, owner of CleaningMaidSimple in Sunnyvale, California, has already ditched spray bottles for fogging machines. Made to be worn like a backpack, his fogging units make for a more comprehensive cleaning, he said. Many of the restaurants he normally cleans have been closed by the California lockdown, but he’s quickly replacing them with new customers that are in sudden need of more frequent cleaning. Even after the virus subsides, much of the technology and focus will probably remain, he said.

The biggest obstacle to ending the pandemic . Brooks Holtom, a professor at Georgetown University who studies how companies develop and retain employees, helped conduct a poll last month in which workers ranked fear of getting the virus fourth, behind the financial health of their company, job security, and how they were being treated by their employer during the pandemic.

“I think that people are dramatically underestimating the virus,” Holtom said. And one person ignorant of the risk can defeat the best retail cleaning protocols.

“That facility is only clean to the point in time where you allow employees back in,” said Mike Soukup, national vice president of sales for Service Master Recovery Management, which specializes in cleaning and disaster recovery. “You could be contaminated five minutes after you opened the next day.” 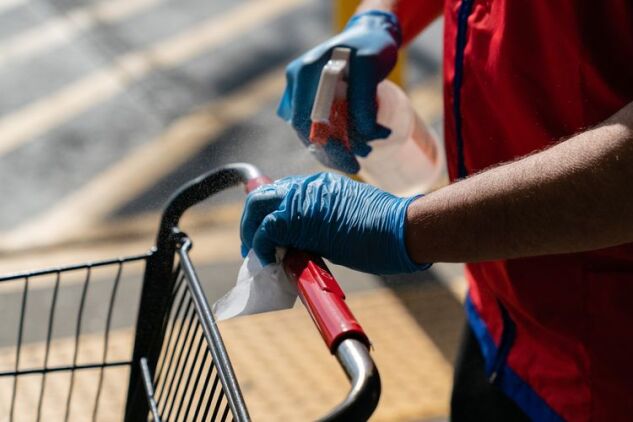 A worker sprays disinfectant on a shopping cart at a supermarket in Duluth, Georgia.
Photographer: Elijah Nouvelage/Bloomberg

It’s unclear how long the pandemic will persist in the U.S. But for now, bio-hazard consultant Paul Meechan said, everyone needs to assume everyone is contagious—and act accordingly.

Retailers should be marking off six-foot sections everywhere to ensure shoppers stay clear of one another, and no one should be touching touch screens; they should use the hard end of a pen, he said. Where people do touch a payment screen, it should be cleaned immediately.

“There’s nothing that can protect you as much as being in a protective bubble away from all other humans,” said Sandro Galea, an epidemiologist and dean of the Boston University School of Public Health. “But that’s unrealistic. So I think it’s just the job to, as much as possible, reduce the risk while maintaining the operations needed.”

The longer term question is whether such safety protocols, adopted at the height of the pandemic, in a post-pandemic world.

Shane Aaron, a partner at Selser Schaefer Architects in Tulsa, Oklahoma, who has expertise in grocery store design, said the illness may change basic assumptions about how retail locations are designed, while accelerating trends that were already underway.

Right now, companies that already offered curbside delivery or pickup for online orders have an advantage over those who didn’t. This may spur wider adoption, which in turn could mean a bigger portion of retail locations will be set aside for preparing orders, and less for customer traffic, Aaron said. Touchless payment availability such as Apple Pay, which has been slow to catch on, may become more popular, too.

“What will be very interesting is to see in six months to a year, coming out of this, what are the things that kind of become a permanent part of our way of life,” Aaron said. “Will people continue to be very mindful of what surfaces they’re touching? There’s a very real possibility that shifts how we design for the retail world.”