Companies across the U.S. are cutting salaries as they fight to survive the coronavirus, upending a key assumption in modern economics and raising another hurdle to rapid recovery.

The hard numbers won’t be in for months, but anecdotal evidence is piling up. On earnings calls, big businesses including and have cited what they say are temporary salary reductions. Federal Reserve officials also have found plenty of supporting evidence.

The pandemic has triggered on a scale not seen since the Great Depression. Pay cuts for Americans who’ve managed to hold onto their jobs may hobble the return to normal. People will have to use a bigger chunk of their income for fixed obligations such as housing and other debts -- leaving less for the kind of spending that can help spark the economy back into life.

“It’s one of the reasons why we don’t expect a so-called V-shaped recovery,” said , chief U.S. economist at Barclays Plc in New York. Americans taking pay cuts “might have little, and in some cases maybe nothing, left over after that for discretionary purchases.” 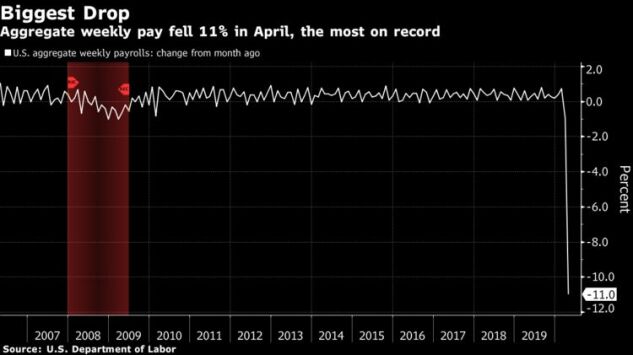 Outside of “high-demand sectors such as grocery stores,” there are signs of “general wage softening and salary cuts” all over the economy, according to a Fed business survey in April. A study by Thomvest Ventures, which looked at 22 public and private technology companies, found that non-executive employees had seen pay reduced by an average of 10% to 15%.

That’s not supposed to happen, according to ideas that have dominated economics for the better part of a century, since unveiled his famous “General Theory” during the Great Depression.

The phenomenon is known as “sticky wages.” Employers may be able to cut inflation-adjusted pay by raising wages less than prices, the argument goes. But it’s harder to cut pay in nominal terms -- in other words, by putting a smaller number on people’s paychecks.

That’s why supply and demand get out of balance in a slump, according to the so-called New Keynesian model that Fed officials and other policy makers lean on. It’s a justification for governments to intervene with stimulus, rather than just allowing market forces to play out until the economy finds a new equilibrium.

The theory has largely held up in practice as well as on paper.

Truman Bewley, an economics professor at Yale University, wrote a whole book on the phenomenon: “Why Wages Don’t Fall During a Recession,” published in 1999. He conducted hundreds of interviews but said he essentially got the answer from the first person he talked to, a manufacturing executive.

“I asked: Why do you lay so many people off rather than reducing pay? And his answer was -- I should’ve made it the title of my book -- ‘to get the misery out the door’,” Bewley said.

“It’s sort of obvious, and I kept hearing that same thing all over the place,” he said. “Your core -- which you want to hang onto and cultivate -- have them work full-time and keep their pay and be loyal to the company. And everybody else, you sacrifice.”

The logic held up even through the unusually deep downturn of 2007-09 -- spawning a new wave of research on the topic. “Sticky wages” were invoked to explain why pay was slow to increase after the crisis, too.

The virus slump looks as if it may be different.

Many businesses -- such as , which sells household and beauty products and is based in El Paso, Texas -- are adopting the language of shared sacrifice.

“Our people supported this approach and continue to do exemplary work, driving the business and keeping the company fully operational,” Chief Executive Officer said on an April 28 . 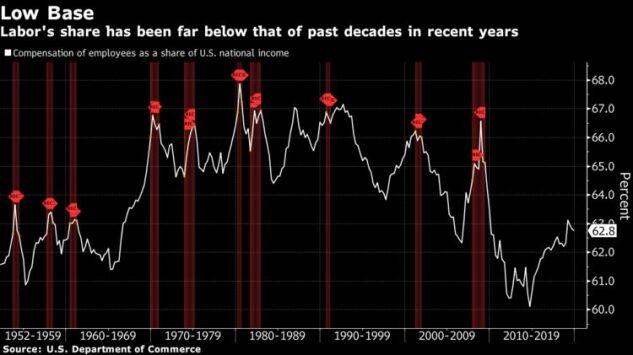 The circumstances of a public-health crisis probably make pay cuts more palatable to workers than they’d normally be, according to Bruce Fallick, an economist at the Federal Reserve Bank of Cleveland -– at least initially.

“If the state of Ohio tells you you have to shut down, or you can only have customers if they’re spaced by this amount, and they can only come in at this rate, and all that sort of thing, it’s pretty obvious to everybody what’s going on,” he said.

But the share of national income that goes to U.S. workers in the form of compensation already is near the lowest level in more than half a century. And there’s no guarantee salaries will return quickly to pre-crisis levels. The pace may depend on government support for the economy, to ensure people have money to spend on goods and services once the pandemic is over.

While Congress has authorized some $3 trillion of fiscal spending, Fed Chair has warned that measures taken to date may not be enough to prevent widespread bankruptcies and prolonged joblessness.

The exposes the shortcomings in the New Keynesian model, according to J.W. Mason, an assistant professor of economics at City University of New York. The real takeaway from Keynes is that pay cuts only drive the economy further from, not closer to, full employment.

“The source of unemployment in a crisis like this is a lack of aggregate demand,” he said. “Pay cuts are only going to make that worse.”

To contact the reporters on this story:
in New York at mboesler1@bloomberg.net;
in Washington at epickert@bloomberg.net