Businesses across the U.S. have begun intensive Covid-19 disinfection regimens, exposing returning workers and consumers to some chemicals that are largely untested for human health, a development that’s alarming health and environmental safety experts.

That pace has now accelerated. “Our frequencies have ramped up in public places like lobbies and elevators to 6-8 times per day,” said Feczko. Restrooms are cleaned every two hours. “Before the pandemic, clients were happy if their trash was emptied and vacuum marks were in the plush carpet,” said Jill Frey, owner of Ohio-based Cummins Facility Services. Now, customers ask for sanitization (reducing pathogens on a surface) and disinfection (killing all pathogens).

“This is a hazardous proposition,” said Dr. Claudia Miller, an immunologist, allergist and co-author of Chemical Exposures: Low Levels and High Stakes. “Cleaners tend to go in with hugely toxic chemicals. We’re creating another problem for a whole group of people, and I’m not sure we’re actually controlling infections.” 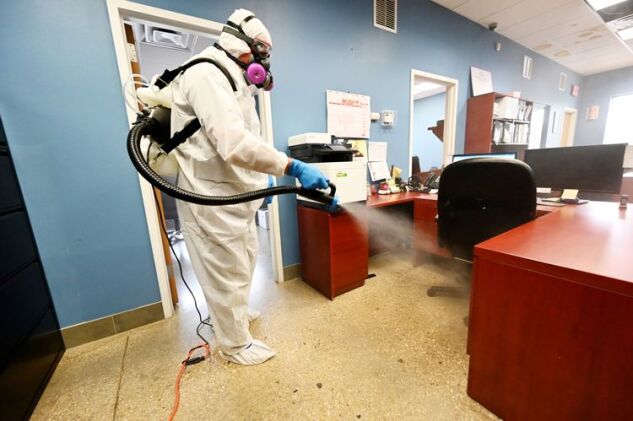 Cleaning companies are selecting disinfectants from hundreds on List N, the month-old compendium of products approved by the Environmental Protection Agency to kill the novel coronavirus. Those chemicals have passed tests to show they’re effective against the pathogen, but “this doesn’t mean that they have been approved because they’re considered safe with regard to human health,” said exposure scientist Lesliam Quirós-Alcalá, an assistant professor at Johns Hopkins Bloomberg School of Public Health.

Limited studies, including on rodents, have raised concerns that some might increase risk of neurological and dermatological problems, as well as respiratory ailments like asthma, or have notable reproductive effects. And while those studies don’t necessarily mean the disinfectants are harmful to humans, environmental health experts contend that risks are rising sharply with the increase in exposure. They also note that there are alternative ways to kill off the virus that carry less potential risk.

“I don’t know that I would be using potent disinfectants in an elevator, rather than something like 70% rubbing alcohol,” said Quirós-Alcalá. (The rubbing alcohol option is approved by the CDC).

The disinfection methods themselves may also prove concerning to employees. Cleaning companies sometimes use electrostatic sprayers—machines which positively charge and aerosolize small droplets of cleaning solution. Spraying is fast, allowing cleaners to cover 14,000 square feet of office space per hour, and the positive charge allows the solution to stick to surfaces. 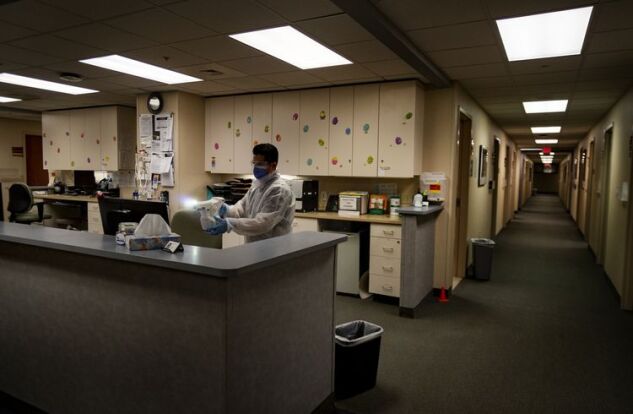 Electrostatic disinfection, which aerosolizes chemicals, is used to clean a medical office in Riverside County, California, on April 15. The potential risk of aerosolizing many disinfectants hasn’t been studied.
Photographer: Gina Ferazzi/Los Angeles Times via Getty Images

“The risks of aerosolizing many of the disinfectants on List N hasn’t been studied,” said Ian Cull, president of Indoor Sciences, an environmental consultancy. “And there are very few that are approved for aerosolizing or misting or fogging.” The EPA is still researching whether sprayers and foggers are effective against Covid-19.

A spokesperson for the EPA didn’t immediately comment on List N or concerns raised by health experts.

Meanwhile, enclosed areas with poor ventilation—particularly common to high-rises that often recirculate air—greatly increase exposure to cleaning agents, said Cull. “Many are hampered by their equipment and unable to ventilate more,” he said.

For a small percentage of workers, disinfectants pose an immediate risk, said Claudia Miller. Up to 10% of people—including asthmatics, migraine sufferers, those with allergies or immune disorders or suppressed immune systems—may experience symptoms such as memory loss, trouble concentrating, mood swings, irritability, headaches, seizures, nausea and vomiting, she said.

Repeated or extended exposures can lead to neuro-immune sensitization and intolerances to common chemicals, foods and drugs. “That becomes a nightmare for us to deal with as physicians,” Miller said. 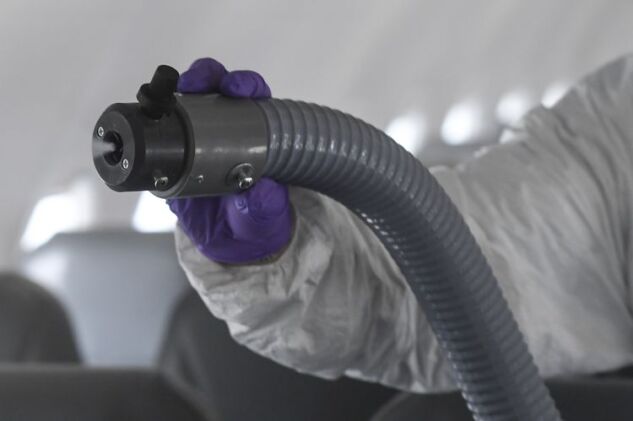 A worker uses a disinfectant fogger at the Denver airport on May 6. The EPA is still researching whether foggers are effective against Covid-19.
Photographer: Aaron Ontiveroz/Denver Post via Getty Images

The cleaning industry has been actively applying new technologies to combat the coronavirus. Merrick Group, a Pennsylvania-based industrial cleaning company now pivoting to disinfect schools, businesses and hospitals, uses a proprietary process that propels a combination of isopropyl alcohol and quaternary ammonium onto surfaces using a CO2 gun. The no-wipe chemical dries within a minute, and the EPA has pronounced it safe for some food-grade and hospital surfaces.

“If we can spray it in a Hershey’s food plant or at a hospital, we can certainly spray it on a school bus,” said Merrick Group President Bob Gorski. The health care sector, however, is proceeding with caution.

“We’re letting the science guide us,” said Geoff Price, co-founder of Oak Street Health, which treats 85,000 patients in 56 clinics. “There’s a lot of new stuff out there, and I think companies are just grasping at different things to throw at the problem, and it’s not always fact-based. Existing technologies do the work if they’re applied correctly.” Oak Street, for example, cleans its patient transport vans with wipes. 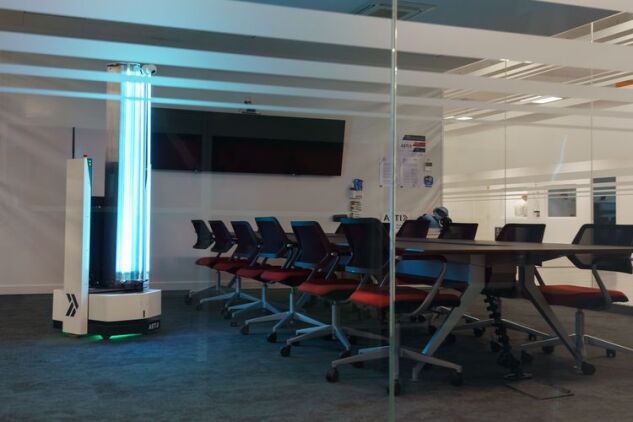 A robot disinfects an office in Spain with ultraviolet light on May 12. UV lights are deployed when humans aren’t present, and up to now have been used primarily in hospitals.
Photographer: Cesar Manso/AFP via Getty Images

The lights are deployed when humans aren’t present, and up to now have been used primarily in hospitals. Whether they work as well in larger spaces (or damage furniture not designed for intense UV exposure) is another question. Their overall benefit is still being evaluated. Last month, New York City’s Metropolitan Transit Authority announced a pilot program with Puro, which includes an evaluation by scientists at Columbia University.

In the meantime, commercial landlords can’t wait for science, and may be incentivized to choose the cheapest methods, said Michael Silver, chairman of commercial real estate group Vestian. “If a business comes up with a great plan, and the landlord agrees, then who’s paying for it?” Silver said. “You wonder why anyone would want to go back to work to begin with.”

To contact the author of this story:
in New York at arianne@gmail.com

To contact the editor responsible for this story:
at jpetri4@bloomberg.net