Bankruptcies related to Covid-19 shutdowns will set records in the next 12 months, according to , the professor emeritus at New York University’s Stern School of Business who developed a widely used method called the Z-score for predicting business failures.

“Whether it’s corporate bankruptcies or personal, this is unprecedented,” Altman said in an interview. “We will break the record in dollar amounts because there are much greater amounts of debt outstanding now than in any prior downturn.”

At this point, he isn’t predicting record-breaking bankruptcy rates in the next year despite the surge in unemployment. Almost 17 million Americans filed jobless claims over three weeks following nationwide business shutdowns.

By comparison, personal bankruptcies peaked at about 1.5 million in 2010 near the end of the Great Recession.

The model created by the economists at the regional Fed banks -- Juan Sanchez in St. Louis along with Kartik Athreya in Richmond and Jose Mustre-del-Rio in Kansas City -- doesn’t predict that the number of U.S. bankruptcy filings will be as high as after the financial crisis.

“But it could happen because the economy could deteriorate more than what we assume,” Sanchez said. And their model doesn’t take into account medical bills, which could be a big factor for some households during this public-health crisis depending on how much the government helps with these expenses.

Personal bankruptcies were rising in some places even before the coronavirus began wreaking havoc on jobs and finances, according to a report on first-quarter filings released this week by the American Bankruptcy Institute. 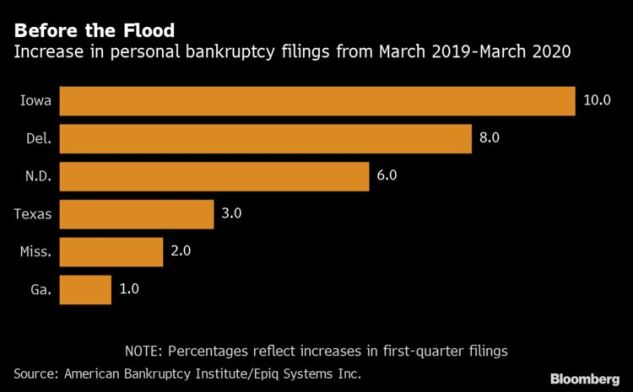 People in the southern U.S. -- America’s poorest region -- were more apt per capita to file petitions than in other parts of the country, according to the report. It’s also an area where some scientists expect to see higher rates of sickness and death from coronavirus. 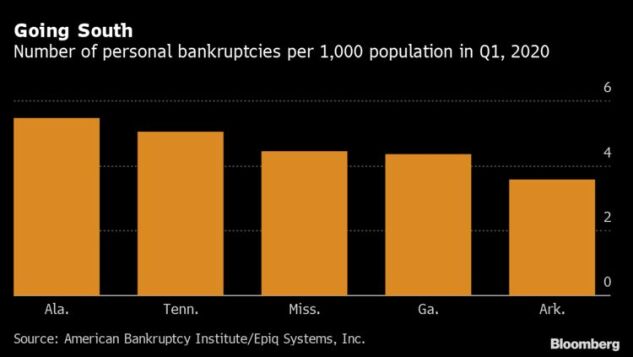 “We definitely think that we will see a significant increase in filings, the magnitude of which will depend on how long and deep the economic crisis goes on,” said Amy Quackenboss, the bankruptcy institute’s executive director.

To contact the reporter on this story:
in Atlanta at asharpe6@bloomberg.net