The Centers for Disease Control and Prevention backed Covid-19 booster shots from and a move that will allow recipients of all three shots cleared in the U.S. to receive a supplemental dose to bolster their immunity against the coronavirus.

Additionally, the CDC said that eligible people may choose a different booster from the vaccine they originally received, granting more flexibility to patients and doctors as the U.S. tries to stave off another wave of infections.

The clearance by CDC Director came after a daylong meeting of an expert panel that advises the agency on vaccine policy. The 15-member Advisory Committee on Immunization Practices voted unanimously to recommended both the Moderna and J&J shots.

Boosters are becoming more widely available at a crucial time when the U.S. is still fighting the summer surge of infections driven by the highly contagious . Health officials are keen to protect those most vulnerable to the disease as the winter months approach, bringing the added threat of a potentially harsh flu season.

In opening the door to boosters, the CDC emphasized that it remains focused on getting shots into the arms of people who haven’t yet received a vaccine.

Walensky said in the statement announcing the booster clearance that data shows that all three Covid-19 vaccines authorized in the U.S. are safe and all “highly effective in reducing the risk of severe disease, hospitalization, and death, even in the midst of the widely circulating Delta variant.”

While the unvaccinated account for the vast majority of the most seriously ill in the current outbreak, breakthrough infections among the vaccinated have fueled concerns that the shots’ effectiveness wanes over time. Moderna and J&J both presented evidence at Thursday’s meeting that their boosters restore infection-fighting power.

The CDC guidance on administration of the booster doses echoes the clearance granted to the boosters by the Food and Drug Administration. The FDA authorized Moderna’s additional shot for people 65 and older along with other adults at high risk of severe Covid because of health conditions or work at least six months after their initial inoculation. The agency also cleared J&J boosters for people 18 and older who got the single-shot vaccine at least two months ago. 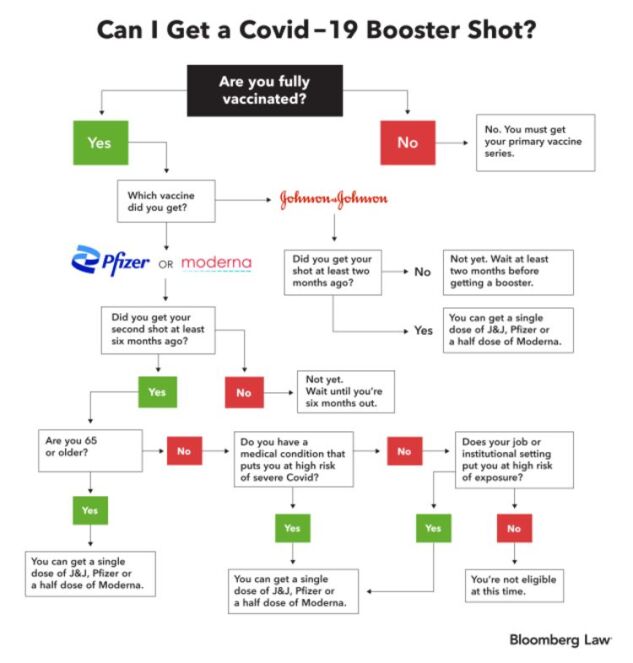 Several committee members made it clear they were voting for the recommendation in the interests of making a clear message to the public that wouldn’t conflict with the earlier recommendation for the vaccine from Pfizer Inc. and BioNTech SE.

While the advisory panel didn’t vote on mixing and matching, many committee members voiced support for the approach. Those who received J&J’s single dose vaccine must wait two months before taking any other booster, while those whose primary vaccination was an mRNA vaccine should wait at least six months before getting any additional shot, including J&J’s.

With Walensky’s sign-off on the expert recommendations, doctors, drugstores and other sites can begin giving shots. The recommendation for the Pfizer-BioNTech shot, which was cleared by the FDA last month, is for older people and adults at high risk, including teachers, nurses and others who risk infection from contact with the public through their jobs.

Last time the CDC’s advisers met to discuss boosters, they determined these frontline workers may be at greater risk of infection, but not for developing severe Covid. While the advisers didn’t recommend boosters for this group, Walensky overruled them, broadening out the booster ruling to include those at risk because of their jobs.

Moderna’s booster dose is half the amount of its regular shot, and during the discussion, Michael Hogue, a committee liaison from the American Pharmacists Association, raised concerns that twice the number of needles stuck in the product vial might raise sterility problems.

Moderna is looking at repackaging the product for their children’s program, said Jacqueline Miller, Moderna’s therapeutic area head for infectious diseases. However, data support the safety of 20 entries into the vial, she said.

Using the standard vial for boosters “is a measure that we’re putting in place now given the current context of the delta surge and the need to make these booster doses available,” she said.

The FDA also said people who have been fully immunized and meet the criteria to get a booster can receive a supplemental dose made by a different manufacturer than the maker of their original shot.

Americans have been able to get an additional vaccine dose since Aug. 13, when regulators authorized an extra dose of messenger RNA vaccines for people with impaired immune systems. Since then, more than 11 million booster doses have been administered.

Clearance of J&J’s booster was highly anticipated by the 15 million people in the U.S. who received it, including the immunocompromised, who have been more vulnerable to Covid symptoms.

The booster program has drawn criticism from the head of the World Health Organization because of the difficulty of getting primary immunizations in many lower- and middle-income countries. Critics say distributing extra doses in rich countries exacerbates the inequity.