In the concert halls, stadiums and bars across the U.S. that have fallen silent during the coronavirus pandemic, an unusual problem has emerged: what to do with the vast quantity of beer that’s gone past its sell-by date.

In March, even before the lockdowns became widespread, about 10 million gallons of beer held by retailers had already expired, according to estimates from the National Beer Wholesalers Association. As thousands of kegs are now being returned to distributors daily, Vanguard Renewables in Wellesley, Massachusetts, is among companies seeking to make use of it by turning the beverage into natural gas for electricity generation. Others will use it to make hand sanitizer, but a great deal of the beer will simply be decanted and dumped. 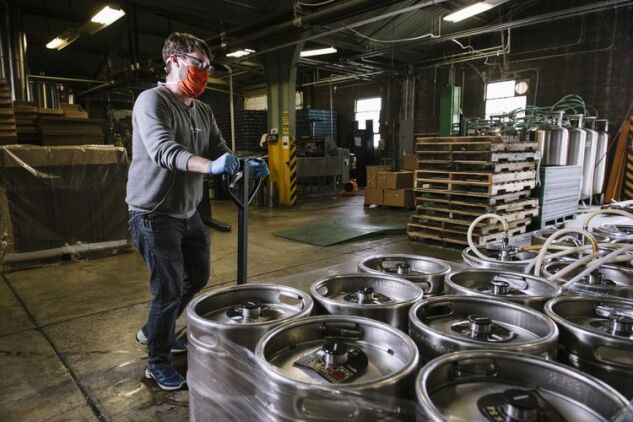 A worker at the Fort Point Beer brewery in San Francisco pushes a pallet of kegs that couldn’t be sold to restaurants.
Photographer: Michael Short/Bloomberg

“This is a tsunami of kegs,” said John Hanselman, chief executive officer of Vanguard, which will take about 60,000 gallons a week to feed expired beer to micro-organisms in biodigestors that release methane, the primary component of natural gas.

Coping with a waste of beer is just one of the many unforeseen knock-on effects of pandemic-related lockdowns that have shut down swathes of the global economy.

The headache for the beer industry goes beyond lost revenue, with challenges like finding environmentally safe ways to dump the beverage, trying to prevent the theft of their kegs and managing a supply chain that wasn’t prepared for such an unprecedented recall. Molson Coors Beverage Co. is offering “” to bars for flat beer.

Venues had been loading up on beer ahead of big events such as NASCAR, basketball championships and concerts just as the virus hit. Sales were crushed during Memorial Day, the largest holidaycaught up in the pandemic, along with Cinco de Mayo, St. Patrick’s Day and Spring Break, according to NBWA rankings. July 4th is next.

“We have an entire supply chain from brewers to distributors to retailers who all have beer at risk in various stages of the supply chain,” said Lester Jones, chief economist for the NBWA in Alexandria, Virginia.

Potential losses could reach $800 million to $1 billion for all industry players in the U.S., Jones said.

The pandemic wasn’t such a bad thing for the entire beverage industry. Home confinement actually accelerated the .

Unlike bottled wine or hard liquor, beer has a relatively short shelf life of about 90 to 180 days depending on whether it’s more of a craft beer that hasn’t been fully pasteurized, Jones said.

On-site premises account for about a fifth of all the beer sold every year and half of retail sales dollars, Jones said. He estimates that 30% of the lost volume from these on-premise retailers may come back in June as lockdowns ease.

Hillebrand, a logistics company that collects empty kegs and decants expired beer for disposal, already has orders to handle a record 1 million gallons of recalled beverage this year. In addition to shipping some of that beer to Vanguard, the firm has lined up other biodigestors across the country, according to Prabh Hans, vice-president of business development and strategy at Houston-based Hillebrand. Some of the beer could end up being used as fertilizers by hop growers, he said.

For the agricultural industry, global malt demand will likely drop by 2 million metric tons over the next 12 to 24 months, said Andries de Groen, managing director for Evergrain, the barley unit of Germany’s BayWa AG. That’s just under 10% of global demand.

“It will have quite an impact,” de Groen said by phone. “Farmers have already harvested or planted for this season, so some of this malting barley will have to go to feeding animals. That will reduce the malting barley premium over feed going forward in places like Europe, Argentina and Australia.”

To contact the reporter on this story:
in New York at nmalik28@bloomberg.net