McConnell at the Capitol on Monday
Photographer: Sarah Silbiger/Bloomberg

Senate Majority Leader ’s insistence that legal liability protections for businesses, schools and colleges be included in any new coronavirus relief bill is approaching a moment of reckoning.

Warning that an avalanche of litigation would undercut any rebound from the pandemic’s economic damage, McConnell has repeatedly said he won’t let a bill to pass the Senate without a temporary shield from most coronavirus-related lawsuits for businesses that follow public health guidelines. 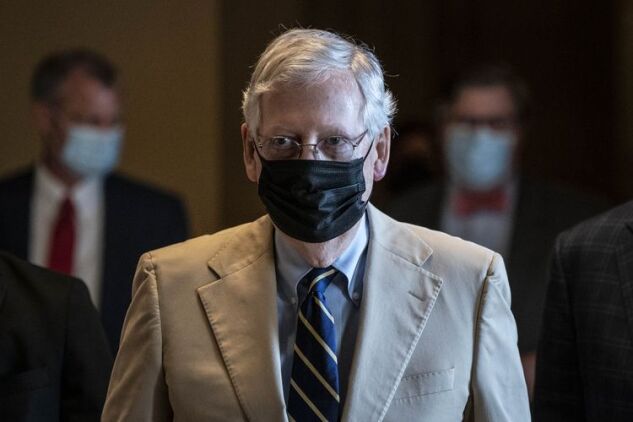 But the proposal remains in limbo with talks on a stimulus package stalled. Action by President over the weekend to at least partially extend expired unemployment aid and defer payroll taxes failed to spur any new negotiations between Democrats and the White House. McConnell and Senate Democratic leader on Monday exchanged blame but no new ideas on breaking the deadlock.

McConnell’s view that that liability protections must be part of an eventual deal doesn’t appear to be shared evenly by Trump and White House officials. Chief of Staff has acknowledged it remains a priority for McConnell, and that he and Treasury Secretary view it as something that should be part of a broad package. White House spokeswoman , when asked last week whether the administration would give up on the liability shield said it was a question for McConnell, because “that’s his priority.”

McConnell continues to bring up the liability shield at every opportunity. “I don’t think the economy has any shot at all of getting back to normal if every entity in the country is dealing with frivolous lawsuits,” he said last week on CNBC. But he’s also made clear he’ll go along with whatever deal can be extracted in negotiations between the Trump administration and Democratic leaders.

The Republican legislation, written by Senator of Texas, would safeguard businesses against most lawsuits or enforcement actions connected to the virus from December 2019, before the first U.S. Covid-19 case was identified, through October 2024. It would also help move lawsuits from state courts to the more business-friendly federal system. Employers would still be liable for pandemic-related personal injuries if they failed to follow public-health guidelines or engaged in gross negligence or intentional misconduct.

Cornyn’s bill would also limit liability to gross negligence and willful misconduct for medical liability claims arising out of coronavirus care by licensed health-care workers. And it would limit lawsuits related to Covid-19 testing and personal protective equipment if that equipment meets U.S. Food and Drug Administration standards.

“The scope of this is radical,” said Michael Duff, a law professor at the University of Wyoming. “What this really is about is to build a structure that will curb bringing these actions in the first place.”

Business groups backing the Republican proposal said in a letter to lawmakers on July 30 that it would provide a baseline of protection to stop “a growing wave of lawsuits from inhibiting our return to a robust economy and healthy citizenry.”

, chief policy officer at the U.S. Chamber of Commerce, said in a statement on July 31 it would be an enormous mistake to exclude temporary liability protections from the next aid package. “Inclusion of a safe harbor is critical.”

Schumer and House Speaker counter by saying that the GOP’s “Safe To Work Act” would dramatically limit consumers’ and workers’ ability to sue corporations that fail to protect them during the pandemic and beyond.

Chairs of the House Judiciary and Education & Labor committees sent an analysis to fellow Democrats last week that suggests the Senate bill “stacks the legal deck in favor of those who are guilty of negligent conduct.” It characterizes the bill as a stark contrast to the House-passed plan to provide enforceable federal standards through the Occupational Safety and Health Administration.

Senator of Illinois, the Senate’s No. 2 Democrat, is among those who question whether there’s any sign of a surge in lawsuits related to the pandemic.

Independent counts are squishy. One oft-cited complaint-tracking effort by the law firm shows that through Aug. 7 there’d been 4,184 coronavirus-related complaints. That count includes a wide variety of actions beyond personal injury, including contractual and civil rights disputes.

The information sent out last week by the House panels highlighted the tracker and said there had been “fewer than 200” lawsuits filed nationally alleging injury or death resulting from Covid exposure.

Duff, the University of Wyoming professor, said the range of potential lawsuits is much broader, and that Democrats should be cautious in suggesting the risk is low.

“My quibble with the Democrats is that I think even if there were substantial numbers of lawsuits, that in itself would not be a basis to eviscerate the law of negligence, woven into our legal DNA.” he said.

Durbin, who’s argued that the existing system of trying cases under state tort law shouldn’t be replaced, said last week that he could see a compromise if a federal agency like OSHA or the Centers for Disease Control and Prevention set standards for safe reopening. Even then, negotiators would still have to reach agreement on issues such as whether some states could keep jurisdiction, and whether the shield would apply only to future cases.

“They need to establish and state the national acceptable standards for a business or a school when it comes to dealing with this pandemic,” Durbin said.

“I’d be happy to talk to any of the Democrats who want to talk,” Cornyn said, adding that they’ve so far indicated unwillingness to discuss the matter.