A pilot at Hartsfield-Jackson Atlanta International Airport in Atlanta, Ga., on April 7, 2021. Passengers still need to wear a mask on planes at least until April 18, when the federal mask mandate on public transit is set to expire.
Photographer: Elijah Nouvelage/Bloomberg

The Senate backed legislation to end the federal mask mandate on planes and transit in a largely symbolic vote that highlights GOP opposition to White House pandemic policies.

Senators on Tuesday voted 57-40 to pass a resolution () from Sen. (R-Ky.) to end the mask mandate on public transportation. Republicans hope widespread opposition will nudge the White House to rethink the requirement, which was set to expire on March 18 but last week was extended to April 18. Eight Democrats backed the measure.

A bipartisan vote “would go a long way toward convincing the administration that the public is on our side,” said Sen. (R-Miss.), ranking member on the Commerce, Science, and Transportation Committee. He spoke at a press conference Tuesday with other Senate Republicans ahead of the vote.

The measure would use the Congressional Review Act, which allows Congress to try to halt federal agencies’ rules through expedited procedures. The Senate vote required a simple majority to pass, but will likely be defeated in the House if it came to a vote. The White House has also pledged to veto it if it does pass.

The vote follows similar Senate resolutions to end the Covid-19 public health emergency (), and the vaccine requirement for health-care workers (), highlighting the partisan divisions over how to respond to the pandemic. 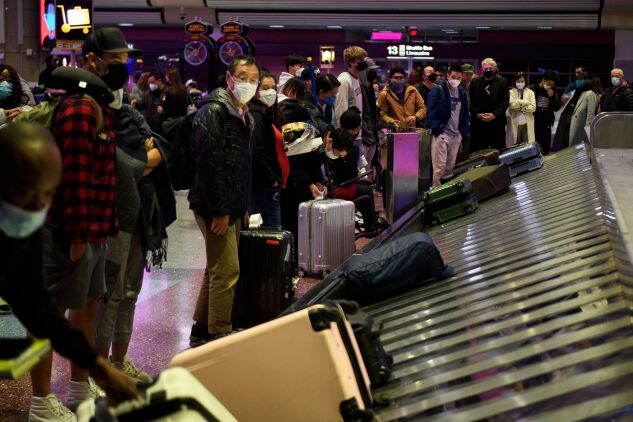 The Centers for Disease Control and Prevention is revising its policy for when and how mask rules should be eased on transportation, the Transportation Security Administration said last week. The increased GOP pressure, along with relaxed masking rules in some states and schools, could influence the Biden administration’s next steps, even as they face fluctuating case numbers.

U.S. Sewer Data Warns of a New Bump in Covid Cases After Lull

Sen. (D-Va.) said the CDC’s plan is “very reasonable” and urged senators to vote against the resolution because it would not only end the mask order, but could also take away the CDC’s authority to impose a new mandate.

“What if there is a new variant that comes and starts to wreak havoc more broadly across the country? Wouldn’t we want the CDC to have the power, immediately upon an upsurge of Covid nationally, to impose a mask requirement on transportation?” Kaine said on the Senate floor Tuesday.

Americans should have the same mask rules as members of Congress at the State of the Union, Sen. (R-Texas) said. Attendees at President Joe Biden’s address to Congress on March 1 didn’t have to wear masks, but had to show a negative test.

“If a grandmother is flying to see her grandkids she’s told, ‘Put that mask on’ on the airplane,” Cruz said. “It makes no sense.”

More than 40 House Republicans also urged the CDC to “immediately rescind” the mandate, in a letter led by Rep. (R-Mo.).

“Continuing a mask mandate on public transportation is unscientific and unnecessary,” the lawmakers wrote to CDC Director Rochelle Walensky.

Republicans are also suing the CDC to end the mask mandate on airlines. Rep. (R-Ky.) led more than a dozen GOP members in filing a lawsuit this week in U.S. district court, which asks the courts to rule that the mask mandate is outside the CDC’s authority.

Dozens of Republican senators also wrote to Biden last week, urging him to end testing requirements for travel to the U.S. and the federal mask mandate for transportation.

(Updates throughout after vote.)