With a history going back to 1881, the has long been a reliable fixture in the small northern town of Petoskey.

On its website, the family-owned company boasts of having invented the laminated butcher block and that its products grace the Getty Museum in Los Angeles and the Waldorf-Astoria in New York. And yet by early July it will be shutting its Petoskey factory and cutting loose all 56 workers at one of the few year-round businesses in the Lake Michigan tourist town.

The economic carnage caused by the coronavirus outbreak has torn through Michigan Maple’s already slim profit margins and made it impossible to continue as a viable business, company President Ann Dau Conway said in a letter to staff. “My family has operated Michigan Maple Block through many adverse economic time periods including two world wars, the Great Depression, and multiple recessions. I am saddened that the mounting challenges the business faces today have compelled us to close the Company,” she wrote.

In an American economy negotiating a downturn that is already being likened to the , with data on May 8 expected to show more than 20 million Americans lost their jobs in April, the story of Michigan Maple and its 56 workers is easy to ignore. It should, though, be a warning for those trying to figure if and when the U.S. economy can stage a from an induced coma.

Although haven’t started to trend down yet, economists are beginning to see signs that the recession is bottoming out. Decision makers from President down to company chief executive officers are hoping more than and the gradual lifting of restrictions could set the stage for a significant rebound this summer.

Yet what’s happening to Michigan Maple points to a worrying trend emerging from the stacks of layoff notices filed by businesses in California, Florida, and New York, where service industries have been hammered by lockdown orders, as well as politically important swing states such as Michigan and Ohio, where key industries such as steel and autos already faced headwinds going into 2020. Plenty of layoffs that just a month ago were labeled “temporary” are now tagged “indefinite” or “permanent.” Alongside announcements of sweeping staff cuts by major employers such as and and the accelerating pace of downsizing in brick-and-mortar retailing, such notices are a sign that even as businesses continue to hope for a speedy recovery, they are starting to plan for a slow one.

The new permanent layoffs are hitting a wide swath of the economy both geographically and sectorally. on Wednesday became the latest major company to announced long-term layoffs, saying it would be eliminating 3,700 jobs, or 14% of its staff worldwide. A day earlier, said it was cutting 25% of its workforce, or about 1,900 people worldwide.

You can see it in Ferndale, Wash., where aluminum giant recently notified state officials that it will be laying off 700 workers by the end of July as it shuts down a smelter that has been a fixture in the community since 1966, part of a plan to “curtail” almost 50% of its global smelting capacity.

In Beallsville, Ohio, American Energy Corp., a subsidiary of , a coal miner already in bankruptcy proceedings before the crisis hit, is laying off 110 workers at its Century Mine, according to an April 27 letter to state officials in which the company cited sudden contract cancellations by major customers. “This layoff will be indefinite and may be permanent,” David Cutlip, the mine’s general superintendent, wrote.

In such industries as aviation, companies large and small are resorting to permanent layoffs. On April 29, Boeing announced it will , approximately 10% of its workforce, this year. CEO said he anticipates it will take about three years for the aviation industry to see demand return to 2019 levels amid a global collapse in air travel. Less than a week earlier, , an aircraft maintenance contractor, notified officials in Ohio that it planned to shutter a facility at Cuyahoga County Airport outside Cleveland and dismiss 52 workers. In documents filed with the state, Constant CEO called the closure a “necessary response to the unprecedented and unforeseeable business circumstances created by the COVID-19 pandemic.” 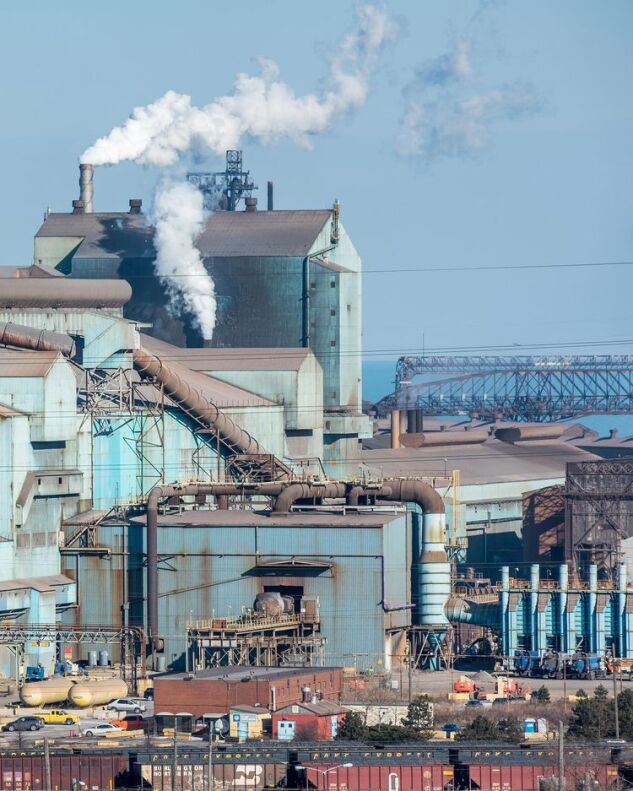 In steel, an industry at the of Trump’s efforts to revive American manufacturing, the crisis may hasten a process of job-destroying consolidation that has been under way for more than a decade. , the biggest U.S. steelmaker, announced on April 28 that it would avoid widespread layoffs and cut pay instead as it expected the market for steel to bottom out this quarter and return to profitability in the second half of this year. , another top producer, has said its operations are running at about 80% of capacity.

But Nucor and Steel Dynamics rely on so-called minimills that are generally more efficient and less labor-intensive than old-style blast furnaces. U.S. Steel, , and combined have shut down at least 10 blast furnaces at integrated steel mills that rely heavily on the auto and petroleum industries as customers, according to Credit Suisse analysts.

Bruce Montagazzi, head of Local 9305 of the United Steelworkers union, was one of 210 people laid off at a -owned plant outside Pittsburgh that makes tube and pipe for the oil industry. The company idled the facility in March, citing a sharp decline in oil prices. But prices have tumbled further since, and that leaves Montagazzi and his members on an indefinite hiatus even as the economy slowly reopens. “I’m sitting on my ass,” he says. “There’s nothing we can do but wait.”

You can also find signs of what the future will look like in automakers’ supply chains. Even as assembly lines , reality looks gloomier than some in Washington or on Wall Street would like.

, which makes lightweight aluminum chassis and other parts for major carmakers, anticipates a 30% dip in worldwide orders this year, according to Jenifer Zbiegien, vice president for human resources and marketing. And while the company is drawing hope from operations in China and Norway, where production has already resumed, prospects for the U.S. still look grim.

Forecasts that at the beginning of this year called for more than 16 million cars to be sold in the U.S. now predict sales of 11 million to 12 million, Zbiegien says. The result: Aludyne is permanently saying goodbye to about 250 employees at two locations in Michigan and a foundry in Columbus, Ga. “Right now we have no manufacturing going on in the U.S.,” she says. “We really want to make sure we get as many people back as we can. But it’s tough.”

The turmoil has consequences beyond business. Even though the U.S. economy just came off a record-long expansion, poverty has become more rather than less concentrated, according to a May 5 report from the Economic Innovation Group. Researchers at the Washington, D.C., think tank found that the country’s poor have become increasingly clustered—trapped may be a better word—in urban neighborhoods, a trend that may not soon reverse. “With another downturn now wreaking havoc on lower-wage industries, it seems certain that the number of individuals below the poverty line will climb again and consequently expand the universe of high-poverty neighborhoods,” the EIG report’s authors wrote.

In Petoskey, the news of Michigan Maple’s closure came just ahead of a summer season that would normally start with the Memorial Day holiday at the end of this month. Town officials are trying to look ahead and figure out how to cope safely with the influx of visitors. One way is to ask out-of-town visitors to bring a 14-day supply of food with them so that they can quarantine when they arrive—which does not bode well for restaurants and other enterprises that rely on these customers for a significant portion of their annual revenue.

While the local economy may manage to shake off the effects of any public health ordinances, the town’s managers worry more about the lasting scars that the loss of a year-round employer like Michigan Maple will leave behind. “It’s just disheartening to the community to lose an established 139-year-old business that has supported a lot of families,” says John Murphy, Petoskey’s mayor. “It brings it home when you look at the families affected.”

(Updates with new data for Uber and Airbnb in the seventh paragraph.)

To contact the authors of this story:
in Washington at sdonnan@bloomberg.net

in New York at jdeaux@bloomberg.net

To contact the editor responsible for this story:
at mlindblad1@bloomberg.net