’s Covid-19 vaccine is safe and effective, U.S. regulators said, a key milestone on the path toward giving Americans access to the first such shot to work in a single dose.

The vaccine was 72% effective in the U.S.-based portion of a global study that enrolled more than 43,000 people, staff wrote in a document that summarized the company’s results and confirmed findings J&J released earlier this month.

The shot was highly effective against severe disease in all regions where it was tested and worked better against mutant coronavirus strains than previously reported, the document showed.

There were no Covid-related deaths among people who received the vaccine in the trial, the FDA staff wrote in their analysis, and no safety concerns that would preclude an emergency-use authorization. The agency lacked data to determine whether the vaccine prevented asymptomatic cases, the report said.

Agency officials prepared the document ahead of a meeting Friday where a committee of external advisers will make a nonbinding recommendation as to whether the vaccine should be authorized. The committee is expected to discuss the effect of Covid-19 variants at length.

Vaccines from and the partnership of and were authorized by the FDA in December, just before the first major coronavirus variants spread rapidly around the world and appeared in the U.S.

J&J’s vaccine, which was studied later in the pandemic, was found less effective in South Africa and Latin America, where two quickly spreading mutants were identified. And a variant that first arose in the U.K., called B.1.1.7, was circulating at high levels in the U.S. as the study unfolded, and has likely affected results, experts have said.

Across all regions, J&J’s vaccine was 66.1% effective in preventing moderate-to-severe Covid-19 cases after 28 days, the FDA said. In Brazil, it was 68% effective, while in South Africa it was 64% effective, the staff wrote. That’s a higher level of effectiveness in South Africa than the 57% the company reported Jan. 29.

J&J released its own documents, including the updated figures, in advance of the meeting. The company’s report also showed that across all testing regions, the one-shot vaccine was 85.4% effective in preventing severe and critical cases of the disease. All trial participants who were hospitalized or died after 28 days had received placebos, rather than real shots.

If J&J’s shot is quickly authorized after Friday’s advisory panel meeting, as the other two vaccines were, the company will initially be able to provide 3 million to 4 million doses next week, a Biden administration official said. 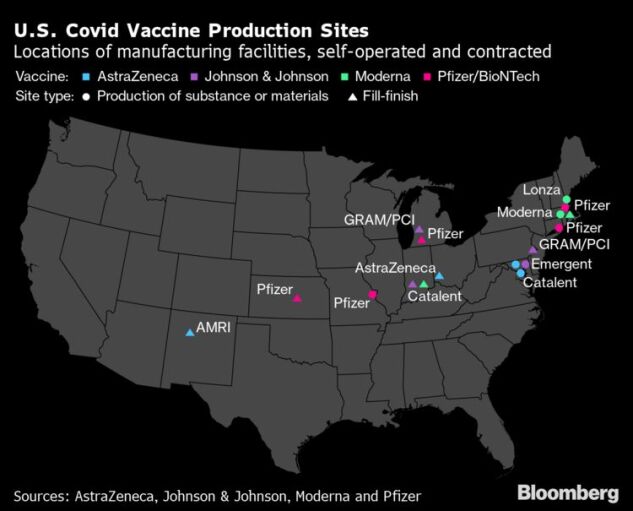 “They’re in a better place now,” Zients said in a briefing. “We’ve helped them with equipment and raw materials, which I think is helping to increase greater capacity and accelerate.”

The U.S. government has a contract with J&J for delivery of 100 million doses by the end of June. The company will be ready to deliver 20 million of those doses by the end of March, Richard Nettles, vice president of U.S. medical affairs for J&J’s Janssen Infectious Diseases and Vaccines unit, said Tuesday. The company continues to ramp up production facilities, aiming to have seven manufacturing sites active by mid-year, he said in a congressional hearing.

Unlike the Moderna and Pfizer-BioNTech vaccines that require two doses given three to four weeks apart and must be frozen, J&J’s single shot can be stored at refrigerator temperatures for as long as three months. It’s made from a cold virus that doesn’t replicate but helps the body develop an immune response and prepare for a Covid-19 infection.

The most frequent side effects included fever, fatigue, headache, muscle pain and injection-site pain, FDA staff wrote. One serious hypersensitivity reaction that began two days after vaccination was likely related to the shot, the FDA said.

The event was not classified as anaphylaxis, a severe allergic reaction that’s been seen rarely in recipients of other authorized Covid shots. No safety concerns were identified by subgroup, such as age, race, ethnicity or underlying medical issues.

J&J plans to offers its vaccine to clinical trial participants who received a placebo, the FDA said in its prepared documents. Upon authorization, J&J investigators would begin informing participants whether they’ve received the real shot. Participants will be monitored for as long as two years after vaccination.

To contact the reporters on this story:
in New York at rgriffin42@bloomberg.net;
in Washington at aedney@bloomberg.net