The U.S. is again grappling with a shortfall of testing that has hobbled the nation since the pandemic’s early weeks, and now threatens to further undermine containment efforts at a crucial moment.

In new hot spots like Arizona, Texas and Florida, where is rapidly spreading, lines for testing extend outside of urgent-care offices and other sites. Two high-school football stadiums in Houston regularly hit capacity by mid-morning and have to turn people away.

The country’s largest labs are forecasting a surge in demand that could lead to longer waits for test results, and have warned that limited amounts of critical testing supplies could become a constraint. Though capacity has expanded, widespread testing remains elusive, in part due to persistent supply shortages. 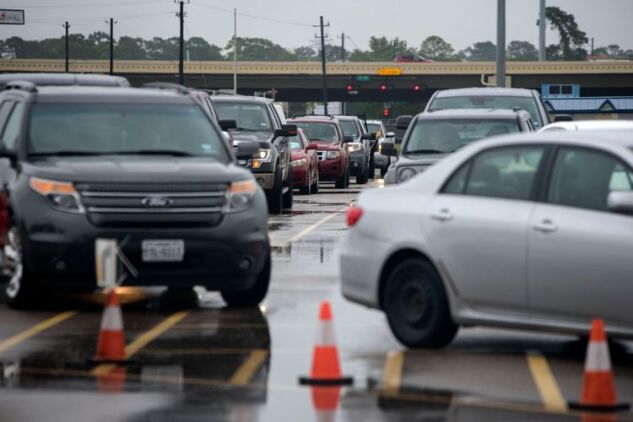 Cars line up at the Delmar Stadium testing site in Houston, Texas, on June 25, 2020.
Photographer: Mark Felix/AFP via Getty Images

“We are still grossly inadequate. We’re so far behind,” said Howard Forman, director of the Yale School of Public Health’s health-care management program. “We still have a supply issue, and then we had a demand issue. You have both issues playing out. At the federal, state and local level, you need both those things addressed.”

The testing dearth comes months into a public-health crisis in which, absent a vaccine, Covid-19 screenings have become the first line of defense. Reopening states only turned up the pressure, boosting demand for testing as Americans increasingly went back to work, ate out, got haircuts and gathered socially.

The pause in reopening was endorsed by Larry Kudlow, the top White House economic adviser. And Senate Majority Leader Mitch McConnell on Monday joined Vice President Mike Pence in encouraging the public to wear masks. On Tuesday, top federal health officials including infectious-disease expert are expected to appear at a Senate committee hearing to discuss efforts to get back to work and school.

Worldwide, deaths have surpassed 500,000. The World Health Organization said “the worst is yet to come” as some countries see a resurgence of cases. Half the deaths are coming from the Americas.

The irregular reopening in the U.S. reflects the two-steps forward, one-step back pace seen elsewhere. In the U.K. and Germany, authorities have reimposed strict lockdown measures on areas affected by local infection clusters.

Arizona Governor announced on Monday that the state would pause operation of bars, gyms and movie theaters as well as tubing and water parks. Ducey said he is targeting reopening in 30 days. Crisis standards of care were put in place and hospitals were told to prepare for a surge, Arizona Department of Health Services Director Cara Christ said.

The shortfalls in U.S. testing availability highlight the Trump administration’s failure to execute a cohesive national strategy. The burden shifted to states, which were provided some testing supplies in May and but have been told only limited amounts are available thereafter.

The U.S. processed about 557,000 tests each day, on average, over the last week, according to the Covid Tracking Project. Given the size of the current U.S. outbreak, 2 million to 4 million tests a day would be needed “to do something to really wipe it out,” Forman estimated. “We’re not really close to that.”

In Texas, which is quickly becoming the new U.S. epicenter, the strain from increasing testing demand was felt by hospitals, public-health departments and patients alike. Houston Mayor Sylvester Turner said capacity at the Delmar and Butler stadium sites will be expanded by 30% starting Tuesday.

A line that started before 5 a.m. Sunday at an urgent-care center in South Austin was compared to the wait for a wristband to Austin City Limits, the city’s annual music festival, or the queue for barbecue at Franklin’s, which would draw dozens customers to its doors before sunrise.

Kaitlin Heikes, a 26-year-old San Antonio resident, had to drive 45 minutes to Spring Branch for a rapid test. She made an appointment on Sunday for the following day after she didn’t have any luck on Friday or Saturday.

At the Houston Methodist hospital system, demand for testing doubled over the last week or so, David Bernard, medical director of clinical pathology, said in a Friday interview. The lab has faced an uphill battle securing supplies, and equipment is needed after diagnostics companies initially prioritized early hot spots like New York.

“We’ve been stretched,” Bernard said. Test manufacturers “don’t give you as much as you want, and it’s been a struggle. We’ve had to work as hard as we can to get things done.”

Covid cases are on the rise in Harris County, home to sprawling Houston, which for a time had been able to meet demand, said Umair Shah, executive director of Harris County Public Health.

“We’re doing everything we can to meet or increase capacity,” Shah said in an interview. “But it is not enough right now.”

“If we had today 6,400 new cases and you have that kind of volume each day, there isn’t possibly a way for the staff of the local health departments” to do contact tracing, he said. “They are getting overwhelmed right now.”

California has experienced delays, too. Barbara Ferrer, who directs Los Angeles County’s health department, said in an interview that some testing centers can take a week to report results, also creating problems for contact tracing. At that point, those who test positive will have had days to go around infecting more people before the county can talk to them and the people around them, Ferrer said.

Los Angeles County counted its highest daily totals of new cases and people who are hospitalized due to the virus, Ferrer said at a daily briefing Monday. The seven-day average rate of positive tests has jumped to 8.4% from 4.6% in late May, the county said in a release.

In Florida, hundreds of cars have been lining up at test centers. Health officials said wait times could be up to four hours on Monday at the Hard Rock Stadium site serving the Miami metropolitan area, and the Orange County Convention Center site in Central Florida had waits of about five hours. In St. Petersburg, local police said a site at Tropicana Field ran out of tests only about an hour due to “overwhelming turnout.”

“The testing capacity is disappointing,” St. Petersburg Mayor wrote in a tweet. “We are working with the state to bring additional, expanded testing.”