Residents wait in line at a Covid-19 mobile testing site in the Times Square neighborhood of New York, U.S., on Sunday, Dec. 5, 2021. Covid-19 threatens a winter resurgence across the country with the omicron variant threatening to fuel an already high case count.
Photographer: Jeenah Moon/Bloomberg

Just as it seemed like corporate America was on a path toward normalcy, a new wave of Covid uncertainty is upending business plans from Wall Street to Silicon Valley.

Manhattan holiday parties are being canceled and banks are contending with fresh outbreaks as the omicron variant spreads. said staffers in the New York City metropolitan area can through the holidays, with hedge-fund firm issuing guidance. shifted its big San Francisco health-care conference online after major biotech companies pulled out of the event.

and Google have indefinitely put off their return-to-office dates. 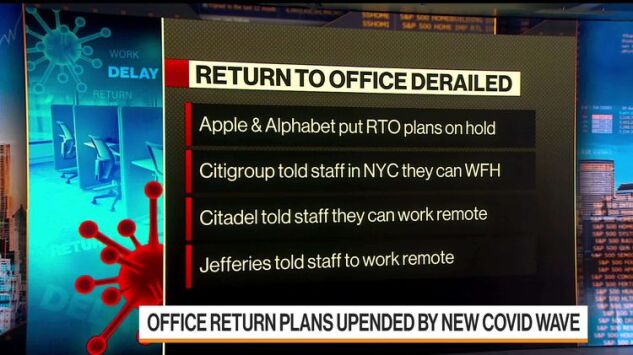 WATC: Companies including Citigroup, Citadel and JPMorgan are being forced to change their return to work plans.
Source: Bloomberg

The latest virus resurgence is putting bosses in a tough spot navigating employee safety and constantly shifting plans for office work, business travel and social gatherings after almost two years of Covid confusion. At the same time, many Americans have largely resumed normal activities in their personal lives, from dining out to attending big events, creating a disconnect between what’s happening at jobs and at home.

“This is just like Groundhog Day,” said , co-chair of the OSHA and workplace-safety practice of law firm Cozen O’Connor. “We had clients planning to bring people back after the New Year -- there’s some who have already decided to delay given omicron and also just the rise in Covid numbers overall.”

For an example of the chaotic situation, look no further than Wall Street, where bank executives have been eager to restock office towers with workers. But New York is now contending with rising virus cases, with models from the Centers for Disease Control and Prevention estimating the omicron could make up 13% of Covid-19 infections in the area and in New Jersey. Last week, told bankers to to remote work after the firm saw an increase in cases following the Thanksgiving holiday.

Morgan Stanley has also had recent outbreaks at its New York offices, according to people familiar with the matter. The bank, where workers typically sit in an open-office format, has required employees be vaccinated but doesn’t have a mask mandate. A spokesperson for the company declined to comment. 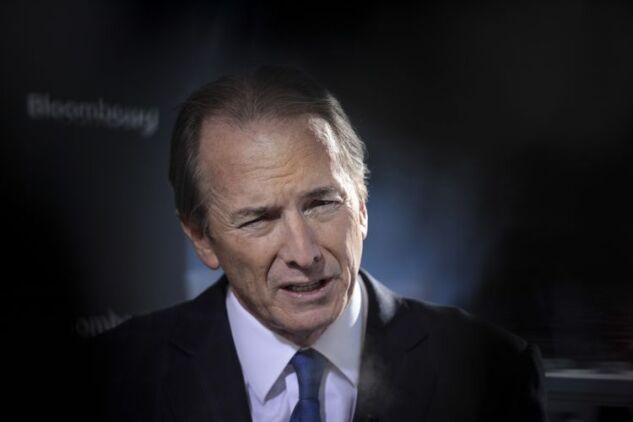 Chief Executive Officer made waves this summer when he admonished his staff and argued that if they could go to a restaurant, then they could make their way into the office. It reflected a growing reality for many of Wall Street’s top brass: They were ready to get back to normal and were tired of workers resisting.

Now, just months later, Gorman is singing a different tune. “I was wrong on this,” he said in an interview with CNBC this week. “Everybody’s still finding their way and then you get the omicron variant. Who knows, we’ll have pi, we’ll have theta and epsilon, and we’ll eventually run out of letters of the alphabet. It’s continuing to be an issue.”

One possible reason Gorman got it wrong: Breakthrough infections among the vaccinated were more common than expected during the recent delta-variant surge, meaning firms that mandated vaccines weren’t as protected as they thought.

At Barclays Plc, some teams have shelved their holiday parties and the firm has seen an uptick in cases in its New York offices. Some of ’s holiday gatherings have been postponed, while cases have been popping up at various offices in the Northeast. Yet many employees are still in the office: CEO on Wednesday posted a photo on Instagram that showed the lobby of the bank’s lower Manhattan headquarters, where vaccines are required, filled with masked staffers attending a holiday market.

The disruptions come just as Americans are preparing for Christmas travel and family gatherings, and there’s little indication that those plans have changed. said it expects planes to be typically full during the upcoming holidays, and leisure bookings for December travel are above its expectations.

“The airline has not observed any noticeable impact on travel demand related to the omicron variant,” the company said in a statement Wednesday.

Even as people are packing restaurants, bars and football stadiums in their free time, employers are responsible for doing the right thing on behalf of their workers, said , a professor of infectious disease at Vanderbilt University. A handful of medical groups Schaffner participates in are rethinking their stance on in-person gatherings in the new year.

“If you had asked us two months ago as cases were coming down across the country, people were beginning to think, ‘Oh, well in the first quarter of 2022 we can have an in-person meeting,’” Schaffner said. “Then cases plateaued, started to go up again, even in some highly vaccinated states. Then omicron hit and all those things have made many of the groups with which I’m affiliated cautious again.”

The effects of the latest surge are being felt broadly. Cornell and Princeton universities finals online, infections are sweeping through the National Football League, and Apple temporarily three retail stores after outbreaks in the U.S. and Canada. Cases are extending to the C-suite, with CEO disclosing Wednesday that he recently for the virus and has been quarantining at home with mild symptoms.

It’s all adding to confusion for executives and corporate directors trying to figure out the best next steps, said Harry Kraemer, a former health-care industry CEO who now teaches at Northwestern University’s Kellogg School of Management.

“Most CEOs say there’s a middle ground on everything, but there are a million different dimensions to this,” said Kraemer, who was scheduled to attend the JPMorgan health-care conference that’s now shifted to virtual. “There’s a struggle to find the happy medium.”

In Silicon Valley, the upheaval is delaying an already slow return to normal for tech giants, many of which have permanently embraced flexibility as they compete for in-demand workers. Apple on Wednesday moved its return-to-office date from Feb. 1 to a time “yet to be determined,” following Google and in giving up on formal timelines.

The haphazard approach over the course of the pandemic could make it harder for employers to eventually coax workers back to the office when companies are truly ready. Google set and reset return dates so many times that employees stopped taking them seriously. “Every date kind of became a joke,” Jeffrey Yaskin, a tech lead for Google Chrome’s web platform team, told Fortune.

But taking a gradual approach, rather than setting a date for everyone to be back, may be the best policy, said Sandy Nelson, an infectious-disease specialist at Massachusetts General Hospital. Scientists don’t yet know exactly how transmissible omicron is, the severity of disease it produces or how well existing vaccines and therapeutics hold up against it, she said. Experts worry about the variant’s mutations and that people are largely moving indoors to celebrate the holidays while cases are already rising.

“There are times when the risks are too high or unknown where it’s not justified to take these risks,” Nelson said.

To contact the reporters on this story:
in New York at jsurane4@bloomberg.net;
in Boston at alavito@bloomberg.net