Schools and child-feeding sites are bracing for rising costs and supply disruptions as federal meal subsidies run out in weeks.

The food assistance, in the form of Agriculture Department waivers authorized since the start of the Covid-19 pandemic, allows schools and child-feeding programs to distribute meals free to kids regardless of family income, and receive federal reimbursement. The waivers expire June 30—barring congressional action to renew them.

“The additional funding has been a huge help,” Gay Anderson, child nutrition coordinator in South Dakota’s Sioux Falls School District, said in a telephone interview. “It’s made a significant difference” in keeping programs functioning and avoiding “borrowing from general education dollars and then taking money away from teachers,” she said. 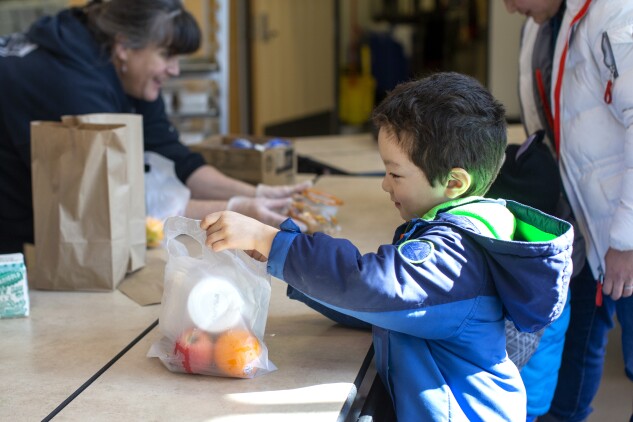 Tyden Brownlee, 5, picks up a free carry-out school lunch at Olympic Hills Elementary School in March 2020 in Seattle, Wash., when schools were closed due to the pandemic.
Photographer: Karen Ducey/Getty Images

When the waivers expire, USDA warns that school meal funding will drop by 40% and millions of kids will lose access to food at school. Roughly 30 million students now get free school meals, according to the department, up from about 20 million before the pandemic — when students’ families had to prove their income was low enough to qualify. The waivers that give schools the flexibility to serve any kids for free were authorized under .

Sen. (D-Mich.) has proposed legislation to renew the USDA school meal waivers. The Agriculture, Nutrition and Forestry Committee has yet to consider it. A previous effort to extend the waivers in a funding omnibus failed, with Politico reporting that Senate Minority Leader opposed their inclusion.

“We’re not shy in terms of our concern, expressing concern about this,” Agriculture Secretary said at a May 26 hearing, urging McConnell (R-Ky.), to act before the waivers run out.

The USDA has made clear that while it can put some rules in place to give schools flexibility in serving meals, it can’t extend the waivers without congressional approval. “We’ve utilized the resources that we have available to us,” Vilsack said. “It’s not as good as what we’re proposing in terms of the waivers but whatever we can do, we’re going to try to provide help and assistance to the schools.”

A Republican leadership aide, asked about the waivers, pointed to the temporary nature of the pandemic child nutrition program and said it was never truly in budget discussions in an agreed-upon form.

Failure to extend the meal assistance will affect students who don’t qualify for free meals based on income level, or whose parents don’t realize they must apply for them again, activists say.

High labor costs and inflation are already making it hard for summer feeding sites to continue. Many will soon have to identify children they’ll serve based on income level, and have said “we’re not doing it this summer,” said Katie Wilson, executive director of the Urban School Food Alliance, a school food nonprofit group. That means they’d shut down rather than try to choose children to be served.

“We’re going to fall off the cliff in the middle of the summer program,” Wilson said. “Kids are going to go into heavy debt because parents are not going to send money to school.” That raises the risks of lunchroom debt and “shaming” of children whose parents can’t pay, she said. The pandemic meal waivers spared such children of having their meals replaced with lower-cost substitutes or arm stamps indicating their parents owed money, advocates say.

Wilson said some families won’t know they need to apply for their kids to get free meals at school until it’s too late. Though parents can apply for free meals at any point during the school year, the applications take time to process, which could leave families in limbo.

“Life right now is really complicated,” Wilson said. “Their rent is raising at an exponential rate. There’s no way in their minds they think that somehow at school, their kid is not going to get food. It’s just not on their radar screen. And I don’t blame them.”

The loss of extra federal money for meals will hit as schools are already dealing with higher labor costs and shortages of workers and supplies.

Schools are reaching into the backs of their pantries to feed kids because sometimes their trucks just can’t get there in time, said Sarah Mehrotra, an analyst at student advocacy group The Education Trust.

Jillien Meier, director of the advocacy group No Kid Hungry, said next year will be even more of a crisis for schools than when the pandemic began in 2020.

“They literally cannot find food right now,” Meier said. “They have trucks that are showing up half empty. They are showing up not at all. They’re getting their delivery orders canceled at the last minute. We have food service management companies that are simply canceling contracts.”

With the waivers about to run out, the Sioux Falls School District has made multiple announcements warning parents that they’ll have to start paying for school meals or apply for free or reduced-price options, Anderson said. Language barriers and parents’ hectic work schedules can impede the message.

That could leave families opting to cut out school breakfasts for their kids, especially with schools forced to meal prices in order to keep up with food and labor costs, she said.

“A lot of them are going to say we just can’t afford it,” she said.