As several U.S. states see a rising swell of Covid-19 patients, hospitals are trying to avoid a scenario where they face more sick patients than they have beds to hold them.

The situation reflects the persistent threat that unchecked spread of the virus can overwhelm hospitals, as it did in Wuhan, China, and Lombardy, Italy. That fear prompted radical measures across the U.S. to lock down movement and commerce, allowing hard-hit areas like New York City, Detroit and New Orleans to handle the outbreak without needing to triage patients.

With all states reopened to some degree, cases and hospitalizations are rising. Arizona, California and Texas all on Tuesday. The question now is whether hospitals will be able to handle it, and what will happen if they can’t. 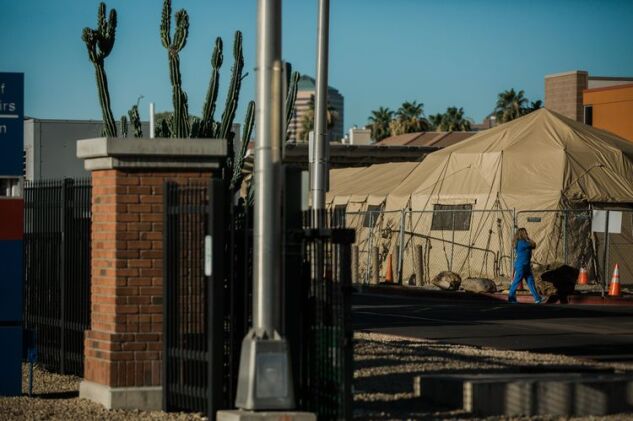 “Many of them still have a lot of available capacity, but who knows how long that’s going to last,” said Eric Toner, a senior scholar with the Johns Hopkins Center for Health Security. “They should be getting themselves ready now.”

Texas, one of the first states to reopen, is feeling the strain. Late Monday, the system in Houston began accepting adult Covid-19 patients because of surging demand, spokeswoman Jenn Jacome said in an email. Harris County, which encompasses Houston, projects that ICU beds will be full in 11 days at the current pace of infections, according to county data.

Peter Hotez, dean of the National School of Tropical Medicine at College of Medicine in Houston, predicted that Texas Governor Greg Abbott would have to reimpose stay-at-home orders or other measures to slow down transmission in Texas cities. “Our ICUs can’t handle the surge, this won’t turn around on its own,” he said in a tweet early Tuesday.

Hospitals in Dallas, Austin and San Antonio also are strained, with virus admissions in those areas up by 66%, 136% and 426%, respectively, since the end of May, state health department figures showed. In Dallas, Baylor Scott & White Health said it would start new restrictions on visitor access on June 23, according to a notice on the health system’s website.

The Arizona Department of Health Services, which gathers data from hospitals in the state, reported Wednesday that 88% of ICU beds, or 1,472, were in use, with 581 filled by Covid-19 patients. That’s an increase from 60% on April 16. The data show 44% of ventilators were in use.

In the initial round of shutdowns in March and April, hospitals around the country canceled planned surgeries to free staff and beds and limit patients’ exposure to the virus. But procedures have resumed, as patients can’t postpone most care indefinitely and hospitals face a business imperative to bring in revenue.

Dallas-based operates hospitals and surgery centers around the country, including in Texas, Florida, and Arizona. A Tenet spokeswoman said elective procedures continue and the hospital system has adequate capacity, staffing and protective equipment to treat the rising number of Covid cases. In the current surge, Covid-19 patients are younger and fewer need mechanical ventilation than in April, the spokeswoman said. 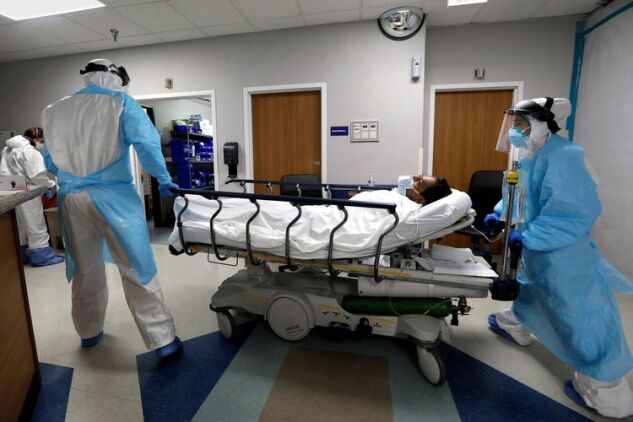 Medical workers move a newly arrived patient to the Covid-19 unit at a hospital in Houston, Texas on May 6.
Photographer: Carolyn Cole/Los Angeles Times via Getty Images

Ryan Stanton, an emergency-room doctor in Lexington, Kentucky, said patient volumes are back to 90% of where they were before Covid, with virus patients alongside people suffering from everything from heart attacks to tooth aches.

“We don’t have that cushion we had a couple of months ago, where if there’s a surge, we have lots of beds and availability,” he said.

Some supplies remain stretched as well. Stanton said his hospital has only 10 to 20 quick-turnaround Covid tests each day. Clinicians are still reusing N95 respirator masks. During a shift on Thursday, a nurse colleague told Stanton he had been wearing his N95 mask for two weeks and “it finally broke today,” Stanton said. A replacement was expected within three days.

Similar supply-chain failures left medical workers exposed in the early days of the pandemic. However, the federal government is boosting procurement of supplies that may be needed if Covid hospitalizations surge. The Health and Human Services Department has awarded $2.5 billion in contracts to manufacturers to get at least 210,000 ventilators by the end of 2020.

The White House Supply Chain Task Force projected that the U.S. won’t meet the need for gowns in June and July. They estimate that manufacturers will meet demand for N95 respirators through October and meet the demand for surgical masks, nitrile gloves, and face shields through July. They did not provide projections for further into the year. The increasing cases could mean demand outpaces what the U.S. is able to produce or import.

Despite the record number of cases in some states, many hospital officials said they are ready for the surge.

Jackson Health System in Miami said Covid-19 admissions grew significantly in the last two weeks, but most patients don’t need intensive care. The ICU at Jackson Memorial, the Miami area’s largest hospital, has more room now than it did in February prior to Covid, a spokesperson said in an email Tuesday.

In North Carolina, where a record 915 Covid-19 patients were in hospitals on Tuesday, the increase was expected as the state lifted restrictions, said Scott Rissmiller, chief physician executive for , a large Charlotte-based hospital system.

“We expected it and we planned for it and it is playing out close to what we expected to see and planned for,” he said. Atrium has expanded at-home care for Covid patients to preserve beds for the critically ill.

At Duke University Health System, ICUs are 93% full, said Chief Medical Officer Joseph Rogers, including with many patients who delayed care after Covid-19 first hit. He said Duke could reduce surgeries again if needed and take other measures to boost capacity. “This surge that we are seeing here is not out of our control,” he said.

Not everyone’s so confident. Don Williamson, president and CEO of the , noted that the number of available ICU beds dipped to 268 last week, the lowest the state had ever seen. He said the state’s total cases have declined slightly -- and hospitals have enough ventilators -- but the number of people hospitalized with Covid-19 continues climbing.

“We don’t have any evidence looking at our hospital numbers that things are getting better,” he said. “We still have high levels of disease in Montgomery, and we are now seeing new cases in North Alabama, where we hadn’t seen it before.”

Alison Haddock, an emergency physician in Houston and assistant professor of emergency medicine at Baylor College of Medicine, called the increase at “frightening.”

TMC could run out of ICU beds in two weeks at the current pace of Covid-19 spread, according to data on its website.

Haddock said the public isn’t doing much to tilt the slope of new cases.

“We’re open. You can go sit in a restaurant indoors here. You can get your nails done. You can do all the things you can do in parts of the country that have less Covid than we do,” Haddock said. “And what actions are we taking as a community to change that direction of that red line? I’m not seeing it.”

Haddock’s hospital, meanwhile, like others in the area, is still sterilizing and reusing N95 masks, though respirators have become more available than they were in March.

“Even if the health system is as prepared as we can be, if we see this degree of Covid cases and hospitalizations and it keeps growing exponentially,” she said, “I don’t know if even the best preparation in the world will be enough.”