was confronted by a judge skeptical of its claim that the U.S. Constitution’s First Amendment bars a lawsuit alleging that a host on the network downplayed the danger of the coronavirus by calling it a “hoax.”

Brian McDonald, a Washington state judge, asked during a hearing Thursday whether it makes sense that the law allows people to sue others for harming their reputation with lies but gives a pass for falsehoods about threats to public health.

“As a policy rationale, it would seem an individual’s reputation is less valuable to society as a whole than making sure accurate information gets out about a life-threatening disease,” McDonald said during the hourlong virtual hearing, which aired on YouTube.

, a lawyer for Fox, said that under the First Amendment, the best way to expose falsehoods is to allow all statements to flourish so that the truth emerges. He also said the idea that there is “infallible truth” about the virus is illusory and noted that the guidance from the Centers for Disease Control and Prevention changes all the time.

The idea that a court could say “this is the only truth that can be put forth in a marketplace of ideas would have an extraordinarily detrimental effect,” he said.

The Washington League for Increased Transparency and Ethics, a nonprofit, sued Fox in April under a state consumer protection law, claiming it engaged in “deceptive” conduct by minimizing the threat of Covid-19 during the early stages of the U.S. outbreak. The group wants the court to order the network to stop making false statements about the virus.

The judge said he plans to issue a written ruling before the end of next week. His decision won’t address the merits of the lawsuit but only whether it can proceed.

“If somebody on the news encouraged others to infect people out in the community with the coronavirus, would that be fully protected by the First Amendment?” McDonald asked Carvin.

That would be illegal and similar to encouraging assault or murder, Carvin responded. But expressing “a discredited view” of coronavirus risks is protected by the First Amendment as “it’s an opinion and not a fact,” he said. 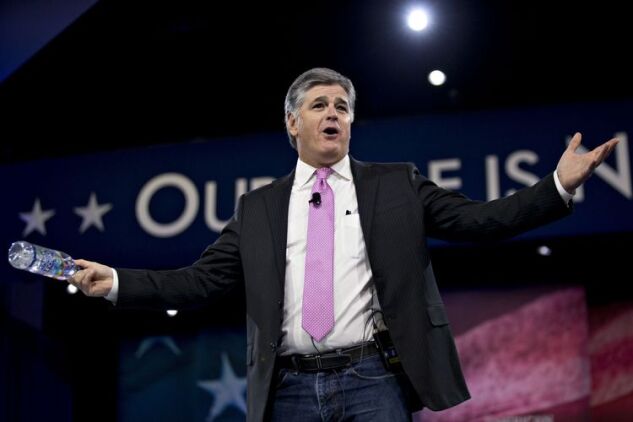 Fox also argues that on-air comments by host were taken out of context. He didn’t describe the coronavirus itself as a “hoax” or a “conspiracy,” but instead used those terms to comment on efforts to exploit the pandemic for political points, according to a court filing.

An attorney for the nonprofit argued that false statements threaten “a well-informed public,” including subscribers who pay for cable service. The nonprofit said in filings that cable programmers don’t have First Amendment rights, unlike newspapers and broadcast stations.

McDonald asked whether Hannity’s statements would be protected by the Constitution if they were made in a newspaper opinion column as opposed to cable TV.

Hannity is free to express his points of view based on facts, but “there is no opinion on the actual existence of Covid-19,” Clark said. “An acceptable opinion would be Covid-19 exists and is threatening some people, but if you are not over 65 or immuno-suppressed or obese or suffer from diabetes, the threat to you is less,” she said.

Fox called the lawsuit frivolous in an April statement and said the Washington consumer group overlooked warnings by the channel’s hosts about the severity of the virus.

“If WASHLITE doesn’t like what we said, it can criticize us, but it can’t silence us with a lawsuit,” the network said.