The had to walk back testimony by an official at a Senate hearing last week after he downplayed the scale of China’s dominance of the drug supply chain in the U.S.

The issue has come to the fore as the pandemic has prompted some in Congress and the Trump administration to question China’s role as the global supplier of key ingredients. The FDA says it’s able to police the safety of the U.S. drug supply regardless where it comes from, even as it’s had to suspend on-site inspections due to the virus.

In answering a question from Senator , a Texas Republican, on how much of the active pharmaceutical ingredients, or API, in drugs in the U.S. are made in China, Douglas Throckmorton, deputy director for regulatory programs in the FDA’s Center for Drug Evaluation and Research, said “for active pharmaceutical ingredients, the U.S provides about 28%, China about 13% and India 18%.” 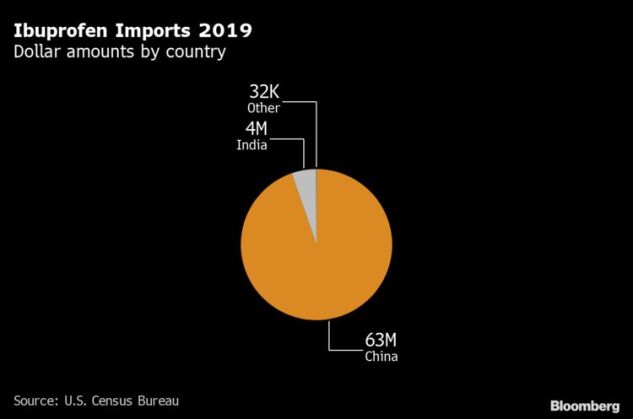 The problem with his response was that those percentages are for the number of API facilities in China and India that export ingredients to the U.S., not the volume they ship, the FDA clarified to Bloomberg following his testimony. Drugs often pass through multiple companies as raw ingredients become active ingredients and then are turned into pills or injections. Pharmaceutical companies typically protect where they buy supplies as a trade secret, making it impossible to know precisely where a drug or its key components originated from in most cases.

“It doesn’t reflect the actual production levels,” Yanzhong Huang, a senior fellow on global health at the Council on Foreign Relations, said in an interview. “China compared to the U.S. is a larger producer of APIs in terms of the output.”

China also dominates production of active ingredients for many low-cost generic drugs, including antibiotics and common painkillers, according to Huang. Last year, China accounted for 95% of imported ibuprofen and 74% of imported acetaminophen, according to U.S. Census Bureau data.

Jeremy Kahn, an FDA spokesman, said that in fact, the agency doesn’t know how much API is coming from China. 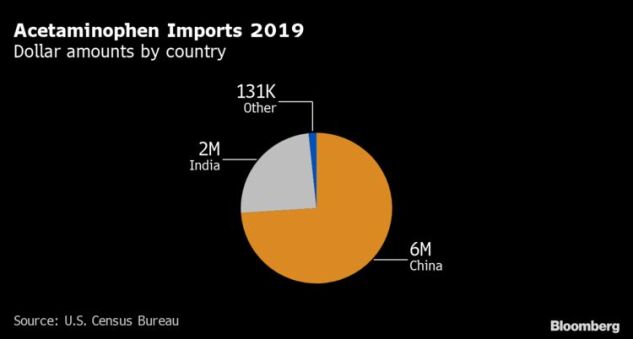 “Data available to FDA do not enable us to calculate the volume of API being used for U.S.-marketed drugs from China or India, and what percentage of U.S. drug consumption this represents,” he said in an email Thursday. Kahn also corrected the percentages for API facilities in each country, saying the U.S. figure is 26%, not 28%, and India is 19% not 18%. Kahn didn’t address why Throckmorton shared incorrect numbers or the facilities data instead of the actual volume.

Throckmorton and Cornyn didn’t respond to requests for comment on the erroneous testimony.

India supplies a large quantity of finished medicine to the U.S. using Chinese active ingredients -- companies in India recently accounted for about 40% of all new generic drugs approvals in the U.S. About 90% of the drugs Americans take are generics. However, Huang noted that India is China’s top buyer of active pharmaceutical ingredients with 70% of its API coming from China, meaning many of the finished treatments Indian firms sell in the U.S. are made using Chinese ingredients.

Cornyn and others support shifting more production to the U.S. to reduce the pharmaceutical supply chain’s exposure to China. It’s a concern shares: the French drugmaker in February plans to create a European API maker by combining six of its production sites in a standalone company to help reduce the industry’s reliance on Asia. China and India account for an estimated 60% of active pharmaceutical ingredient production volume globally, Sanofi said, citing industry data.

Concerns about relying so heavily on China and India for treatments predated the coronavirus. Almost two years ago, millions of blood-pressure pills made in China and India started being recalled because they were with a chemical that can cause cancer. A Pentagon official called the U.S. reliance on the Chinese supply chain a at a hearing last year of a Congressional advisory panel on China and the U.S. And since the virus began spreading, some experts have questioned whether Chinese manufacturing quality is suffering, fearing corners are being cut to make up for lost productivity as the country’s was curbed by the outbreak.

The FDA said in March that it had identified 20 drugs solely made in China or that were made with API exclusively made in China that it was monitoring in case supplies ran short given production had slowed. When asked about that at the hearing last week, Throckmorton emphasized the importance of ensuring drug supplies over concerns about their origin.

“Whether a product comes from a specific country or not is important, I’m not minimizing that, but it’s more important for me as a U.S. federal drug official to make sure the drug is available from somewhere to meet the needs of the American public,” he said.

The FDA has also contacted more than 180 drug manufacturers that rely on China even though they may be able to find the ingredients or finished medication they need elsewhere to verify whether they anticipated any supply impact, Kahn said.

There have been shortages of many medicines, particularly ones used to help patients on ventilators, and most recently of the and its generic versions. While the supply interruptions have been linked to the pandemic, it’s unclear what role China played, given it’s nearly impossible to know where a drug or its active ingredients is made.