The Food and Drug Administration’s new standards on Covid-19 vaccine development may dampen Wall Street hopes that a shot to prevent the spread of the pandemic will be available before the U.S. election in November.

With the FDA’s standards for an emergency use authorization not much lower than what’s needed for full approval, the first authorization seems more likely to happen in early 2021, said , an analyst with SVB Leerink.

The agency’s guidance, published on Tuesday, said any vaccine candidate would need to prove itself at least 50% more effective than a placebo to earn an approval, and that merely showing immune response data would not be enough.

“It is hard to see how those studies could enroll thousands of patients, vaccinate them, and then observe them for safety for six months or more, and then be approved” before the end of the year, Porges wrote in a note to clients. A fully approved vaccine will need “extensive safety data, and full clinical efficacy,” he said. 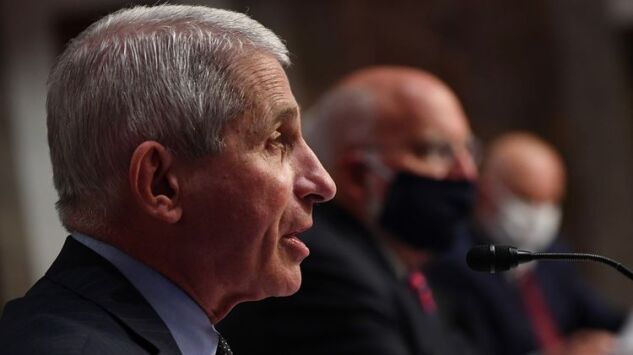 Dr. Anthony Fauci tells a Senate panel that he’s hopeful a vaccine for Covid-19 will be ready by the beginning of next year.
Source: Bloomberg)

Investors were might arrive in the autumn after of President Donald Trump pressuring health officials in his re-election bid. Drug and vaccine developers including , , and are taking part in the administration’s . The government program is meant to further efforts to develop a vaccine faster than any have been developed before, though details are scant.

Pfizer rallied as much as 5.6% on Wednesday after with partner showed promising effects for a vaccine candidate, while small-cap vaccine developer plunged 27%. Moderna, one of the leaders in the space, fell 7.9%. All three vaccine programs would likely need longer-term results to clearly establish safety, according to Porges. DNA vaccines in particular, like Inovio’s, may be “held to a more stringent standard given general concerns about risks of genetic integration.”

Porges doesn’t see a 2020 vaccine happening, and “the success of that effort is by no means a ,” he said. Instead, he predicts a full vaccine approval may come in another two or three years, with widespread adoption taking another year after that.

Should a vaccine be approved, getting enough Americans to vaccinate will be another hurdle to turning the tide on Covid-19. Yesterday’s guidelines are meant to depoliticize the government’s vaccine efforts so people aren’t afraid to get vaccinated, Beacon Policy Advisors founder said in a phone interview.

“They are trying to put out very prescriptive guidelines so outside experts can quickly try to validate the studies and help with the public health efforts,” Barford said. The stock market has not incorporated “enough analysis surrounding the politics of a vaccine and how even if the science delivers, our political leaders may fail the test by overly politicizing the process to a point that it will take longer than anticipated for a sufficient number of people to agree to be vaccinated to reach herd immunity in the U.S.,” according to Barford.

But the tone of U.S. regulators should put citizens at ease as it “suggests that regardless of political pressure, the FDA continues to apply sound regulatory judgment and expertise to the development of all medical products, particularly vaccines, regardless of the severity of the economic, political, or public health urgency of the current situation,” Porges said, “For that integrity, the general public, the biopharma industry, and all of its investors should be grateful.”

To contact the reporter on this story:
in New York at cflanagan1@bloomberg.net

To contact the editors responsible for this story:
at clarkin4@bloomberg.net