Covid-19 has resulted in the deaths of more than 3,500 people in the U.S., sickened tens of thousands more and has devastated the economy. But for one group of professionals, the news isn’t all bad—divorce lawyers.

In China, where spouses were cooped up for months, divorce filings skyrocketed, proving that familiarity may really breed contempt. And lawyers in some U.S. cities are starting to see a similar phenomenon occurring.

In China, stay-at-home rules have been mostly relaxed, but in the U.S., more and more states are actually ramping up forced seclusion requirements. Maryland and Virginia on Monday issued new restrictions, meaning more than half the states are under orders to stay home. 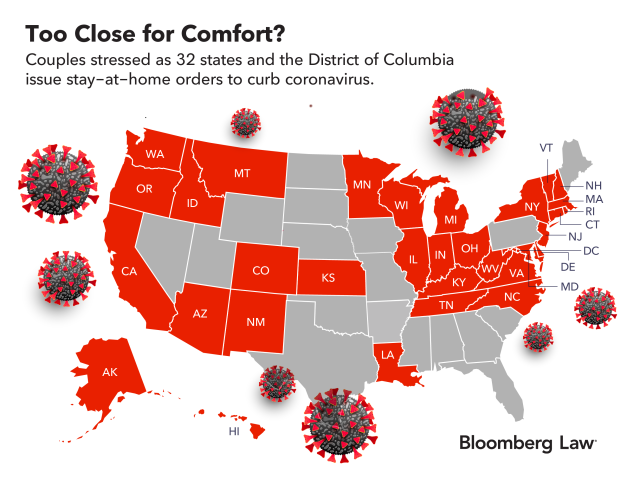 Pressures of the outbreak combined with couples being on top of one another every day, can put some marriages to the test, lawyers say.

“Difficulties in a relationship do not get better when you’re in close quarters, unless you’ve got professional help,” said Susan Myres, president of the American Academy of Matrimonial Lawyers, who practices in Houston, Texas.

But marriage counselors, who may also see a bump in business, are not a big priority in a time of real crisis. Collapsing finances add even more pressure, she said.

“Sometimes with financial strains, like we’re seeing with the financial markets right now, that can cause a lot of marriages to fall apart,” said Geniveve Ruskus, president of the Northern California chapter of the association, who practices in Santa Clara County.

And for those already divorced, there will be an additional strain. Arguments over child custody and financial support issues, which cause enough acrimony in the best of times, will likely get worse, Myres said.

“A lot of people are missing out seeing their kids, they’re going to want to do some enforcement. People are being let go, their assets dwindle to scary levels. Those emotions trigger responses that often get people into a family law office,” she said.

However, it took a while to see a divorce boom in China, and the same delayed effect is expected in the U.S. Neither attorney has seen a serious uptick in inquiries, at least not yet.

“I think that’s because this is still all so fresh. People are trying to home-school their children, work from home, and everyone is literally sheltering in place.”
Plus some courts are not open for new filings, so even if some couples wanted to file for a divorce they can’t, Ruskus said. She expects an uptick in May or June, when tempers have truly frayed.

“When the economy is bad, people don’t spend money on discretionary things, and sometimes filing for divorce can be expensive,” Ruskus said. In 2008, she said, during the financial crisis, she saw that people would freeze up, get through the worst, and several months later, file for divorce.

But the news isn’t all bleak. In addition to more divorces, expect another impact of sharing close quarters for couples: a coronavirus-related baby boom.

“I mean, humans go to extremes when we’re in high anxiety,” Myres said.

To contact the reporters on this story: in Washington at yhan@bloomberglaw.com