A deal is a deal, except for a growing number of companies that agreed to buy assets before the Covid-19 pandemic sent markets plunging.

Panicked executives already have launched a handful of legal battles that could blow up billions of dollars’ worth of merger and acquisition agreements. And litigators predict at least a dozen more limping deals will crash land in courts over the next few months, while many others will be quietly renegotiated.

Among the high-profile transactions that have become feuds are ’s $5.8 billion purchase of a U.S. luxury from , ’s $3 billion acquisition of We Cos. stock, and ’s $1.1 billion bid for a controlling stake in , owner of the Victoria’s Secret lingerie chain. Another involves backing out of a with .

“The cases are just the tip of the iceberg,” said , a law professor who specializes in Delaware corporate law. “There’s going to be a lot more deals that just get quietly renegotiated and never wind up in court.”

Already, half a dozen cases of virus-related challenges to transactions are before judges in , records show. The state is the corporate home to more than half of U.S. public companies and more than 60% of Fortune 500 firms.

The main reason some big deals are ending up in court is that the value of assets companies agreed to buy have plummeted since the onset of the coronavirus pandemic.

With shutdowns of most retail businesses including stores, movie theaters and restaurants, the U.S. economy will contract a record 37% in the second quarter and have its since World War II, Bloomberg Industries estimates. More than 26 million Americans filed unemployment claims after losing their jobs.

worldwide are down 31% to $751 billion this year compared with the same period in 2019, according to data compiled by Bloomberg. In the U.S., deals including investments for U.S.-based companies has fallen 48% to $273 billion, the data show.

Some lawmakers have called for a on mergers and acquisitions during the pandemic. 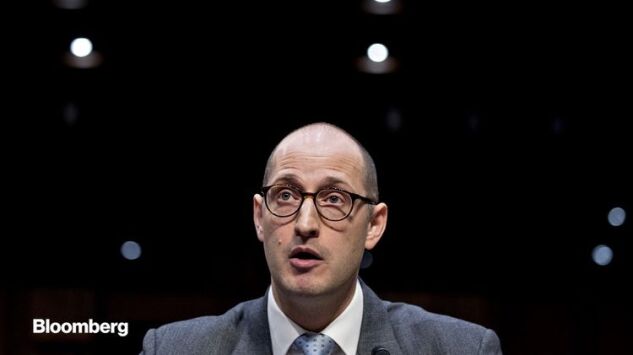 WATCH: Noah Phillips, commissioner of the U.S. Federal Trade Commission, criticizes the proposed ban on mergers and acquisitions during the coronavirus pandemic for coming at a “counter-intuitive” time.
Markets: The Close.” (Source: Bloomberg)

Buyers and sellers are looking for the nearest exit because many assets simply aren’t worth what they were a few months ago, said , a legal analyst with Bloomberg Industries.

Whether a deal gets undone will depend on the specific language of each transaction agreement, and a judge determining that the virus is a “material adverse event,” she said.

“Most of the disasters felling deals in the past had local implications,” Tyler said. “This is global. We are somewhat in uncharted waters here.”

Two years ago in a Delaware court, German drugmaker was allowed to scuttle a $4.3 billion buyout of U.S. rival , which tried to cover up serious quality-control problems.

Chancery Judge Travis Laster said a material-adverse-event clause in the contract allowed Fresenius to renege after wrongdoing by Akorn executives cast doubt on the validity of its data and profitability. It was the first time a Delaware judge found an unequivocal violation of the clause.

But some deals specifically rule out pandemics as providing proper legal grounds to cancel a deal, said , a portfolio manager of DuPont Capital’s merger arbitrage strategy, which managed $266 million as of April 23.

“Courts are going to be very reluctant to provide a loophole to buyers, especially when” the deals carve out pandemics, Arch said in an interview. “I expect many of the deals to close on the terms agreed upon in the original contract.”

When buyers are unable to deploy material-adverse-event clauses to scuttle the contract, they look for other ways to pressure the seller into renegotiating the deal, Arch said.

Mike Samuels, a portfolio manager at New York-based , said the L Brands case may indicate whether Delaware courts will view the virus as a legitimate reason to bail on a deal because the acquirer, Sycamore, is “putting contract language to the test.”

, portfolio manager for the Merger Fund at , said he’s keeping an eye on deals such as ’s $3.6 billion bid to buy , and ’s purchase of Caesars Entertainment Corp. He said he sees those as the “riskiest deals with the potential for breaking.”

Delaware chancery courts will always be a bellwether for the fate of deals where executives are having second thoughts, said , director of the John L. Weinberg Center for Corporate Governance at the .

“We saw this after the 9-11 attacks and the Great Recession of 2008,” when economic upheaval forced dealmakers to reconsider their plans, Elson said. “It’s well known that Delaware will enforce contracts and properly decide rights under them. That’s why people incorporate here.”

The near shutdown of state courts will complicate matters for dealmakers faced with fast-approaching deadlines to complete their transactions.

“I think you are going to see a bunch of settlements in these cases,” Elson said. “We won’t be seeing trials for awhile, and some of these cases just can’t wait.”

To contact the reporters on this story:
in Wilmington, Delaware at jfeeley@bloomberg.net;
in New York at jfineman@bloomberg.net