The Agriculture Department is shelling out more than $1.2 billion for food boxes designed to relieve Americans’ hunger and farmers’ sales losses during the coronavirus pandemic. One of the biggest awards—$39 million—will go to a Texas event manager that specializes in weddings.

CRE8AD8 LLC is one of almost 200 suppliers to receive a contract under a new federal program that puts surplus dairy, meat, and produce into boxes for food banks and other nonprofits. Small agriculture businesses, meanwhile, are criticizing the government’s choice in suppliers, which include Gordon Food Service Inc. and

The Agriculture Department launched the Farmers to Families Food Box Program as more than 20 million Americans grapple with job losses and many line up at food banks. Agriculture producers are floundering as restaurants and schools remain shuttered to slow the spread of Covid-19. Many farmers struggling without their typical markets have been forced to dump their milk and abandon their crops to rot.

“We saw an opportunity to do some good during this challenging time and took a chance,” said Gregorio Benito Palomino, chief executive officer of San Antonio-based CRE8AD8 LLC, in a statement. “We had no idea we’d be asked to help on this level.” 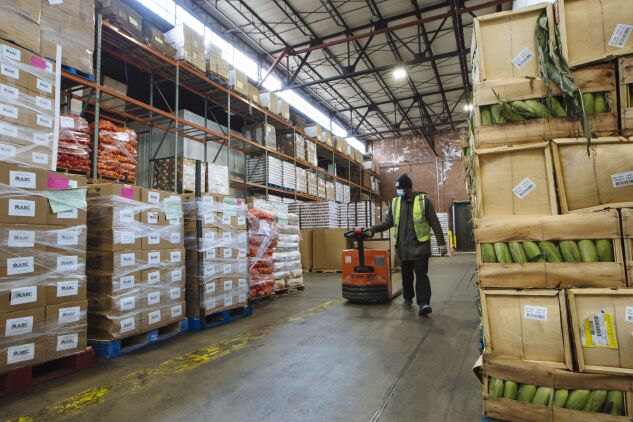 A worker wearing a protective mask and gloves moves a pallet stacked with boxes of food at a City Harvest facility in Queens, New York, on May 7, 2020.
Photo by Angus Mordant/Bloomberg

Palomino’s firm will assemble boxes of fresh produce, precooked meat, and dairy products for seven states in the southwest region. The company says it has more than a dozen locations, including Moscow and Beijing, and arranges corporate events for clientele, such as the and .

“The sale of chicken to the food box program benefits the meat supply chain, which includes thousands of independent farmers who raise birds for us,” Tyson spokesman Gary Mickelson said in a statement.

The other two companies didn’t respond to requests for comment.

Why Chicken Is Plentiful During the Pandemic and Beef Is Not

The food boxes are an element of the department’s $19 billion Coronavirus Food Assistance Program established on April 17. The program allots $3 billion in produce, meat, and dairy purchases for distribution to food banks and non-profits, and about $16 billion in direct payments to agriculture producers struggling with coronavirus-related losses. The funds stem from both the second coronavirus stimulus law () and the third relief package ().

Offers by prospective contractors for the food box program were due May 1, and approved suppliers were announced one week later. The department received 568 proposals for the seven supplier regions, according to a letter that Bloomberg Government obtained.

“We were pleased to see the abundance of interest from both food distributors and non-profit organizations,” said Secretary in a statement Friday before announcing the contractors. “Within days, the Farmers to Families Food Box Program will begin distributing surplus food, while safeguarding food safety techniques, to communities across the country where it’s needed most.”

Successful proposals included many small businesses and those that will support local and regional farmers, which was part of the evaluation criteria for contract award, a department spokesperson said Tuesday. Proposals were evaluated by the technical information contained, the prices offered, past performance of the offeror and the offeror’s capability to perform, the official said.

Suppliers were assigned their regions, and goods to provide, which could include boxes of fresh fruit and vegetables, dairy products, precooked pork and chicken, fluid milk, or a combination of all of the above. The contracts span May 15 to June 30.

Beau Blalock, vice president of operations at Gulf Coast Produce in Biloxi, Miss., said he expected the large corporations “that haul a little bit of everything from bread to seafood to canned products to napkins” would be “able to get a leg up” on the competition for contracts.

He said he also noticed the approved suppliers included companies that “already have federal contracts through the military and through school programs.”

“But it was designed to help—in theory—smallish distributors like ourselves,” Blalock said, whose company operates across three states. He added that, if his bid for the federal program had been accepted, it would have helped Gulf Coast Produce keep more employees, as revenue is down 80% due to casino and school closures.

“For us, this isn’t a temporary problem,” said Shay Myers, chief executive officer at Owyhee Produce in Parma, Idaho. “This is an issue that we’ll be dealing with for the next 14 months.”

His company partnered with regional and national distributors in a proposal, but was denied. Myers said his family-farm may be oversupplied by 50% to 60% until May of next year.

“It’s disheartening to see the type of dollars that are being wasted” in the food box program, Myers said, “dollars that could be going to the farm.”

It’s a lesson for American consumers to “decide how important it is for them today and tomorrow and 10 years from now to have food grown in their own country,” he said.

(Updates with Agriculture Department's response starting in the 12th paragraph.)