From nursing homes in New York and a landfill in Utah to Disney World and the Las Vegas Strip, employers are wrestling with workplace safety in the age of Covid-19 and making fraught calculations about how to safeguard both their businesses and their employees.

Mass testing, a critical tool to stem the virus’s spread, would appear an obvious solution.

But dogged by issues of cost — diagnostic tests start at around $100 each — access, logistics and employee privacy, tests aren’t part of most back-to-work plans. As health-care companies that work with employers in this capacity are fond of saying, there’s no silver bullet. 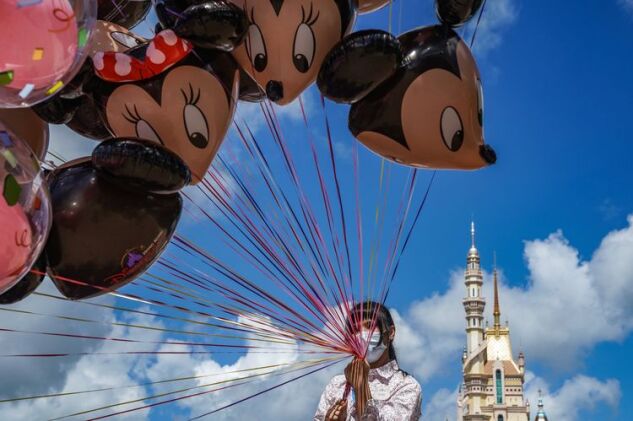 Disneyland Resort reopened in Hong Kong on June 18 after shutting down for five-months.
Photographer: Lam Yik/Bloomberg

Another major deterrent is that Covid-19 tests only measure that point in time, notes Lauren Vela, senior director for the Pacific Business Group on Health, which represents large employers like and If a worker is infected shortly after being tested, it wouldn’t show up but everyone would be falsely reassured by the negative result.

Testing is “not really available, feasible or easy, and it’s not a solution you can do for every employee, every day,” Vela said.

So instead employers are favoring lower-cost, easier-to-implement interventions like temperature checks and symptom screening while also stocking up on masks, hand sanitizer and cleaning wipes. While those measures help, asymptomatic individuals could still transmit the virus. 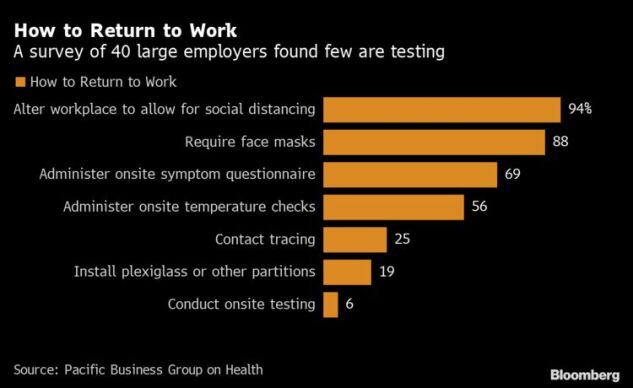 Health-care startup has been working with employers on Covid workplace issues. Only a few are taking an on-site testing approach.

“The cost of the test at scale is pretty prohibitive,” Andrew Le, a physician and Buoy’s chief executive officer, said.

But at Walt Disney Co. theme parks, actors working the live shows are demanding screenings before they return.

Performers sing, dance and hand things to each other, noted , president of the , the union that represents cast members at Broadway shows and Disney’s Florida resorts.

“There’s lot of people who can do their work when they’re wearing a mask and gloves. Our people can’t do that,” Shindle said in an interview. “It’s just very important to our membership, who otherwise is overwhelmingly eager to get back to work.”

In a June 24 letter to its unions in California, Disney said it doesn’t think testing is a good idea, citing a high rate of false negatives and concerns that it creates “a false sense of security,” among other factors. Instead, it’s focusing on physical distancing, wearing effective face coverings, hand washing and sanitization.

Intermountain Regional Landfill in Utah, located about an hour’s drive from Salt Lake City, has made a different calculation. Cases in the state have surged in recent weeks and an employee recently had to stay home for three days because of a potential exposure through a family member who ended up testing negative.

That was “not only cumbersome and a loss of productivity, but really frustrating to know we’re not in control of it,” said Chief Financial Officer Adam Campbell. 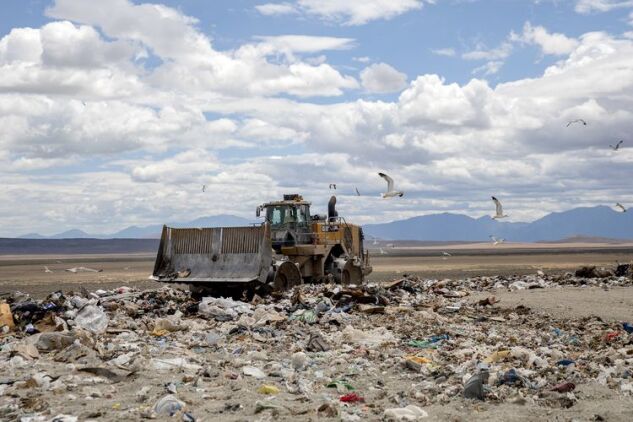 Intermountain processes over four million pounds of waste a day and operations are easily disrupted even if only a few workers got sick. In the worst-case scenario, should infection hit all 15 employees and force a total work suspension, the business would face estimated losses of about $20,000 a day.

So Intermountain decided to test its workforce. It’s working with Atlas ID, a software company that had focused on employment verification systems before the pandemic, to work out how often to test and in which scenarios. It’ll cost about $2,000 a round.

“We could be testing for years at a high level and never even touch just missing one day’s worth of having to divert our waste,” Rob Richards, the landfill’s president and general manager, said.

At nursing homes and assisted living facilities, which an analysis by the Foundation for Research on Equal Opportunity found account for 45% of virus deaths in the U.S., testing employees is mandatory for many. But the bill quickly adds up.

owns in New Rochelle, New York. His roughly 100 employees were tested twice a week for five weeks, at a cost of $20,000 a week. The screening did identify at least six sick employees, but Russ is still waiting to see how to cover the $100,000 tab. The lab that processed the tests will try billing employees’ insurance, though Russ said he doesn’t expect them to cover repeat testing.

Keene Valley Neighborhood House, an assisted living facility in upstate New York, has had success billing insurance, according to executive director Richard Rothstein. Yet employers are ultimately likely to bear these costs themselves through higher premiums.

The Centers for Disease Control and Prevention saidon Friday that employers may use testing as part of a comprehensive approach to reducing the virus’s spread at work. But employers, many of whom are already facing massive losses from shutdowns, often find the cost doesn’t make sense. Antigen testing, which screens for active infections and provides rapid and cheap results, has promise but is only to come to market.

Although antibody tests, which screen for past infections and are easier for labs to scale up, seemed like a solution, it isn’t clear what sort of immunity antibodies grant. And after the CDC said antibody tests shouldn’t be used in deciding to send people back to work, the Equal Employment Opportunity Commission issued a statement telling employers they can’t require the tests. Diagnostic tests for current infections are permitted. 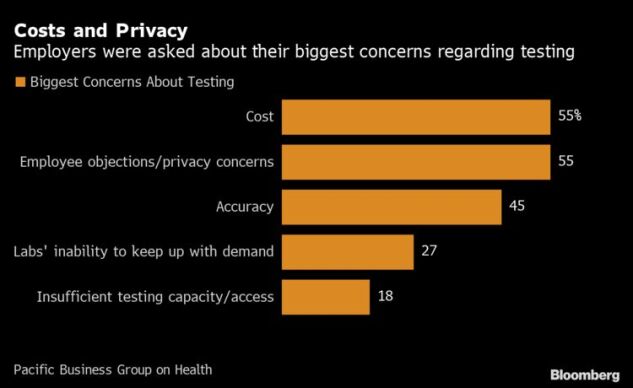 South of Los Angeles, EB Design builds decorative interiors for hotels and high-end restaurants, a group that was “basically decimated” during shutdowns, owner Eric Beneker said. He decided to test his 20 employees biweekly to ensure their safety, but couldn’t find information or resources on how to do it.

The company ended up booking appointments through facilities set up by local governments. It’s been time-consuming, though, as there were few open slots and long turnaround times. And they had to mislead the sites to get in because individuals have to be symptomatic to get tested.

In May, two employees tested positive and EB Design closed down. The company paid a private lab to re-test everyone. It cost about $3,000 total, around 10% of the company’s payroll. It turned out neither had Covid-19. Could the company field that kind of bill regularly? “Hell no,” Beneker said.

“The problem is we’re so far down the road here with reopening of the economy,” he said. “While we’re trying, and we’re doing our best, we’re not getting the tools” needed to help.

Logistical challenges abound — results often take days or over a week to come in, supplies continue to be limited — but privacy issues often weigh as heavily.

partners with Buoy Health on its workplace safety plan. A testing facility is available as needed, but the builder isn’t implementing mass screenings, Executive Vice President Alex Hall said, citing privacy concerns and the limited usefulness of the results.

“We get it. There’s an element of Big Brother around this situation anyway,” Hall said. “We want to be mindful of how people are feeling.”

The battle is also playing out in Vegas, where cases have surged since casinos began reopening last month. 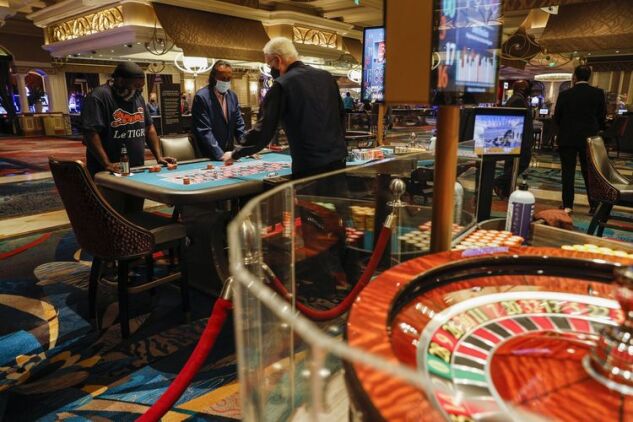 Managers, unions and other business leaders created a program with a hospital to test workers at the convention center. But it isn’t mandatory, according to Bethany Khan, a spokesperson for the Local 226, which represents casino employees.

While has made testing mandatory after a worker died from the virus in June, others haven’t. Khan said the union is pushing for regular testing and on Monday, it sued Harrah’s hotel, operated by Caesars, and ’s Bellagio for not adequately protecting workers.

MGM said it’s working with health-care professionals to develop safety protocols, including mandatory testing for anyone with symptoms or exposure, as well as free ones for anyone who wants a test. “Nothing is more important to us than the safety of everyone inside of our properties,’' the company said.

At a press conference last week, a bellman at The Signature at MGM Grand hotel spoke about falling ill in June.

“It was three months that we did social distancing, that we did lockdown in Las Vegas,” Sixto Zermeno said. “I go back to work, three days later I’m sick on the fourth day.”

(Updates with back-to-work guidance from CDC)

in Los Angeles at cpalmeri1@bloomberg.net

in New York at alavito@bloomberg.net