A program intended to assist struggling farmers and hungry Americans is plagued by regional inequities and distribution problems, Democrats and nonprofits say.

“The effort is clearly not working for everyone,” said Rep. (D-Ohio), Agriculture Subcommittee on Nutrition, Oversight, and Department Operations chair. “We’ve seen reports of companies awarded contracts with little-to-no experience in the timely sourcing and distribution of food, including nearly $40 million to a Texas wedding planner.”

House Agriculture Committee members pored over the implementation of the Farmers to Families Food Box Program at a Tuesday hearing, questioning how the funds have been used and which companies and nonprofits have benefited.

Fudge said some contract recipients spent the money on lobbying and public relations. “This is fraught with waste, fraud, and abuse,” she said.

“Here we are, 90 days after the initial announcement of this program, attempting to find fault in small details instead of celebrating a bold effort to feed those impacted by this virus,” Johnson said. 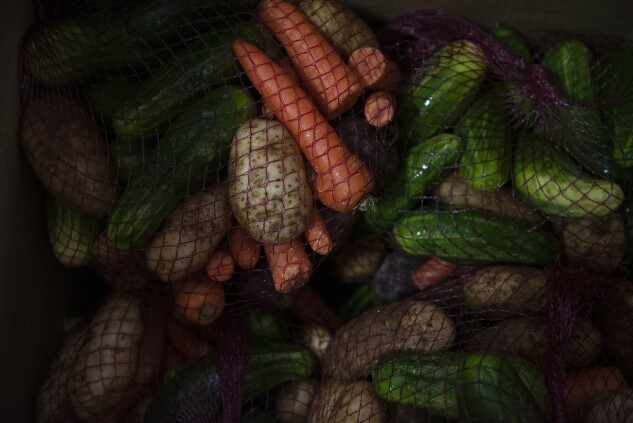 Bags of vegetables wait to be sorted for the Houston Food Bank in Houston on May 13, 2020.
Photographer: Callaghan O’Hare/Bloomberg via Getty Images

The program, which aims to provide relief to the agriculture industry, has earned the ire of small, struggling produce companies, which say they were overlooked for corporations, such as and Borden Dairy Co. Producers are grappling with fewer markets as schools remain shuttered and restaurants gradually reopen with state-mandated restrictions. Americans coping with job losses during the coronavirus pandemic have flocked to food banks that are trying to keep up with demand.

The Agriculture Department launched the food box program as an element of the $19 billion Coronavirus Food Assistance Program, established in April. The program allocated $3 billion to purchases of surplus dairy, meat, and produce for food banks and nonprofits. The funds stem from the Families First Coronavirus Response Act (Public Law 116-127) and the CARES Act (Public Law 116-136).

More than 43 million food boxes were delivered to recipients as of July 21, the Agricultural Marketing Service reports. The first round of purchases, which spanned May 15 through June 30, totaled about $1.2 billion, while the current phase running through Aug. 31 aims to purchase almost $1.5 billion.

“The program is accomplishing what we intended—supporting U.S. farmers and distributors and getting food to those who need it most,” said Agriculture Secretary . “We call it a win-win-win.”

More than a dozen lawmakers in New York’s congressional delegation, led by Democratic Reps. and , pressed for federal transparency around what they called a “highly inequitable program.”

They pointed out in a July 10 letter to Perdue that only 4% of distribution contracts went to the Northeast region during the first phase, even though it was hit hardest by the pandemic during that period.

The members also said the program has given contracts to vendors that are “often logistically ill-equipped.”

“I cannot fathom why USDA continues to exclude local food banks that are already set up to do this work in support of the neediest among us,” Tonko said. “Instead, USDA has chosen to award lucrative food distribution contracts to small out-of-state companies that have little or no presence or capacity here.”

Fudge questioned the program’s distribution plan, which grouped Puerto Rico in the same region as Pennsylvania, and the Virgin Islands with Maine.

The Agriculture Department didn’t immediately respond to a request for comment.

Mark Quandt, executive director of the Regional Food Bank of Northeastern New York, said he’s “disappointed” with the program’s implementation, adding that only one vendor in its 23-county operating region was awarded a contract.

“We hoped the process would improve in round two that began on July 1, but we heard nothing from USDA or vendors until the very end of June,” Quandt said. “We still have no idea how much food we will be receiving in this round.”

The program has worked out favorably for some food banks, including City Harvest in New York City, said Max Hoffman, associate director of supply chain, procurement, and logistics. The program started out “a bit chaotic,” he said, but the process has since smoothed out.

Increased federal oversight of commodity distribution would improve the program, so “it’s not just up to the food banks to call all of these contract winners,” he said. Hoffman’s team contacted “pretty much every single contract winner in the Northeast,” which he admitted would be laborious for smaller organizations.

The nonprofit receives about 32 truckloads weekly, with Hoffman estimating that it will disburse 109 million pounds of food this year, topping their highest numbers by 27 million.

“The need is astronomical right now,” Hoffman said. “We’re nervous about the next few months.”