A college education is proving more valuable than ever during the coronavirus pandemic, insulating many American workers from the job losses that have ravaged the economy.

Of the 20 million Americans who have lost their job in the virus-induced crisis, many more have been individuals without a college education than those with at least a bachelor’s degree, according to research by Federal Reserve Bank of San Francisco President and economists Shelby Buckman and . Jobs for those without college degrees tend be more contact-heavy and less compatible with remote work than the those of graduates.

“Higher levels of education have long been an insulator against labor market disruptions, reducing the incidence of job loss,” the economists wrote in a letter published Monday on the bank’s website. “This was certainly the case in the months following the outbreak of COVID-19.”

The difference in the jobless rate between Americans with a college degree and those without was 2 percentage points at the end of last year. Jobs held by those without a college education are more likely to involve person-to-person contact and therefore have been more susceptible to termination during the pandemic, the economists found. 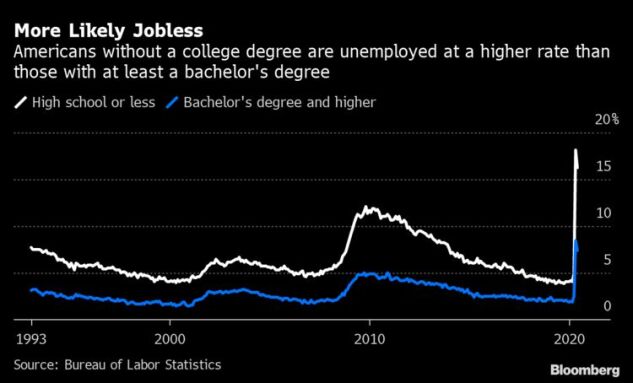 Americans with a high school education or less were also more likely to be concentrated in jobs where teleworking is not available. The economists analyzed data from a Pew Research Center survey and found that 65% of workers with a bachelor’s degree or higher said they were working from home during the pandemic. Among those without a college education, 22% said they teleworked.

The economists note that the unemployment rate does not fully capture the extent to which Americans have been impacted by the crisis, as many have dropped out of the labor force altogether and aren’t counted in the jobless rate. Only about half of workers without a college education participated in the labor force, meaning they were either employed or seeking a job, according to the San Francisco Fed research. That compares with 71.9% for those with a bachelor’s degree or more.

A college education is not a cheap or easy endeavor in the U.S. One year costs about $17,237 at a public university and $44,551 at a private school, according to the National Center for Education Statistics. About half of high school graduates from low-income households have enrolled in college, the Fed economists said. For high-income households that figure jumps to 80%.

“Education is a common thread contributing to large differences in the severity of the virus’s impact across individuals,” the economists wrote. “The differences in outcomes are not surprising. There were preexisting disparities in the labor market caused by these differences in educational attainment, and the inequalities have only deepened because of the crisis.”

To contact the reporter on this story:
in Houston at asaraiva5@bloomberg.net