Vehicles move along the 280 freeway in California.
Photographer: Elijah Nouvelage/Bloomberg

California is looking at new ways to pay for road and other transportation projects, as officials brace for falling gasoline and diesel taxes due to the transition to zero-emission vehicles.

The California Department of Transportation is launching four pilot programs in early 2021 to examine how to charge drivers based on the miles they drive, rather than the gasoline their vehicles consume. The state wants 5 million clean cars on the roads by 2030, and Gov. Gavin Newsom (D) signed an executive order this year phasing out gas-powered vehicles in favor of 100% zero-emission passenger car sales by 2035, with the medium- and heavy-duty truck sector following in 2045.

Less than half of the current revenue from gas and fuel taxes will be available by 2030 as vehicles become more fuel-efficient and zero-emission models become more popular, state officials estimate. As less vehicles fill up at the gas pump, taxes on gasoline and diesel fuel sales that fund road improvements will decline.

Road charges offer a way to capture money from all drivers, officials say.

“The long-term potential of the gas tax is not positive,” said Lauren Prehoda, road charge program manager at the transportation agency, known as CalTrans. “Some people are paying more to use the roads than others,” she said, adding that a road charge would be “a lot more fair.” 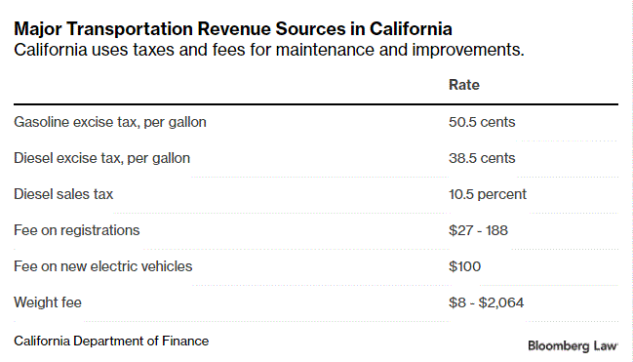 CalTrans was looking at road charges in 2017, when it tracked 5,000 vehicles over 37 million miles—the largest pilot project in the nation at the time.

It recommended studying whether technology could enable the state to collect road charge fees without creating extra work for consumers. In other words, Prehoda said, “in a way that is super, super easy?”

The state is now looking to answer that question, with the help of 150 volunteers willing to participate in three of the pilot projects.

The first phase entails downloading an app and using a GasBuddy credit card that calculates a road charge when used at the gas pump or charging station. The second creates a mock automobile insurance policy with the pay-per-mile carrier Mile Auto Inc. and sends monthly pictures of the car’s odometer. The third is using the ride-hailing platform Via to simulate road charge fees into its billing.

A fourth phase, starting in April, will involve autonomous vehicles.

Mile Auto sends customers texts each month with a hyperlink where people can upload a photo of their odometers. Technology
ensures the photo matches the year, make, and model of the car insured. A default per mile fee kicks in if customers do not upload their photos.

Collecting a road charge would work in the same way, with simulated bills being generated.

The process is fairly basic and not too intrusive, he said.

“There’s not a black box in your car and you’re wondering what information is being sent,” he said. There’s no GPS in your car. It works really well and people trust what they can see on their dashboard.”

GasBuddy and Via didn’t respond to a request for comment.

The vendors will use the same type of encryption security as credit cards and the state will never see personal data, Prehoda said. But there are privacy concerns given that the current tax collection system doesn’t relay any information about driving habits, said Lee Tien, a senior staff attorney and legislative director for the Electronic Frontier Foundation.

“It’s a looming question in terms of money and what to do, and cross-cutting all of that is a question of how much information about individual drivers and vehicles is going to be captured as a result,” said Tien, who also serves on the California Transportation Commission’s road charge advisory committee.

Manufacturers, insurance companies, police agencies, and even cities with smart traffic grids could be interested in the data from cars. “There’s a lot of data to be gathered about people,” he said. “There’s always the, ‘Do we know where it’s flowing and wherever it does flow, is it being properly secured?’”

Adding to the issue this year is the coronavirus pandemic, which brought on home quarantine orders and less traffic.

State transportation revenues—made up of excise and sales taxes on fuels, a new fee in 2020 on zero-emission vehicles, and two other fees—are expected to be down $1.2 billion this year, with $900 million of that owed to gasoline excise taxes and diesel sales tax drops, according to the state Department of Finance.

Annual gas and fuel tax revenue hit $8.8 billion in 2019 and was expected to fall to $8.7 billion this year, based on a pre-coronavirus estimate. State finance officials will update the numbers in January as part of next year’s budget process.

“I don’t think the gas tax is dead this year, or probably in three or four years,” said Asha Weinstein Agrawal, director of the Mineta Transportation Institute’s National Transportation Finance Center at San Jose State University. “In 10 years, it could be more problematic if we have a lot more electric vehicles.”

Revenue will depend on how fast people move from internal combustion engines to cleaner models, she said. With more than 763,000 electric vehicles on the road currently, the state typically accounts for 40% to 50% of nationwide sales, according to the nonprofit Veloz, which promotes the vehicles and tracks sales.

If the state moves forward with road charges, it will have to consider the ease of the current system of collecting at the gas pump.

“I think the system now is extremely simple. It’s extremely effective. There is almost no fraud or evasion and the costs are low,” said Steve Finnegan, manager of government and public affairs at the Automobile Club of Southern California.

The trucking industry has similar concerns, though a pilot for that sector is still a few years away, said Eric Sauer, senior vice president of government affairs for California Trucking Association. He and Finnegan also serve on a road charge technical advisory committee for the California Transportation Commission.

“The simplicity of it is pretty easy, but we also understand the transportation fund has been dealing with the larger amount of electric vehicles coming on the road,” Sauer said. “You see a dwindling of the account.”

The pilot programs will run through June and a final report is expected in the spring of 2022. No final decision has been made on whether the state will move to road charges. Ohio and Oregon have existing road charge programs, while states like Hawaii, Colorado, and Pennsylvania are examining the issue.