A student wears a facemask as she enters the St. Lawrence Catholic School on the first day of school after summer vacation in north Miami, on Aug. 18, 2021.
Photographer: Chandan Khanna/AFP via Getty Images

The Biden administration is exploring using the courts and federal funding to push states that are against mask mandates, in a sign of flaring tensions between governors and the federal government over how to deal with rising coronavirus cases.

The Education Department announced this week it may launch a civil rights investigation into state policies that prohibit mask requirements in classrooms. The Justice Department could also get involved, including by supporting lawsuits against those states or initiating litigation of its own, education attorneys said.

A faster way to press states may lie in how the Education Department spends stimulus dollars, which are tied in part to reopening schools safely. Education Secretary Miguel Cardona sent letters to several Republican state leaders warning them against interfering with investments in campus safety allowed by the March stimulus law (), but stopping short of saying the department would take the money away. 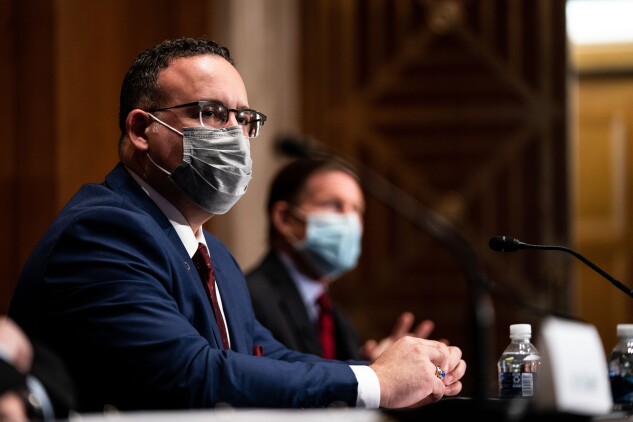 Biden and Cardona’s threats this week marked a new phase in the administration’s efforts to support school districts that impose mask requirements. The White House has argued in recent weeks that state officials that ban masks in schools should “get out of the way.” That language intensified this week, as students across the country return to classrooms, and positive cases are increasing in areas with low vaccination rates, driven by the more contagious delta variant.

“This is the warning shot,” said Rob Duston, a lawyer at Saul Ewing Arnstein & Lehr LLP. “The question is what are they prepared to do next.”

Parents across the country are beginning to challenge bans on mask mandates in court—offering an opportunity for the Justice Department to show its support through amicus briefs, or by filing its own case.

In Texas, parents of students with disabilities filed a complaint in federal court, arguing that the governor’s ban on mask mandates in schools violates federal disability protections. In Florida, at least one lawsuit filed in state court is challenging the ban on mask mandates in classrooms using a similar argument, saying that an unmasked child with asthma is particularly at risk of severe complications from the virus. A judge has yet to issue a ruling in both cases.

A judge on Thursday denied a request by Florida Governor (R) to throw out a separate lawsuit challenging his ban on mask mandates in schools, setting up a clash next week that could see the court block his executive order. And the Texas Supreme Court allowed local school officials to temporarily require students to wear masks.

At the same time, the Education Department’s Office for Civil Rights could launch an investigation in response to a federal civil rights complaint—or even initiate its own review before it receives a complaint, two education attorneys said.

“They don’t have to wait for a complaint to come to them,” Duston said.

Typically, institutions such as school districts or colleges will agree on a voluntary resolution to avoid the potential loss of federal funds. Barring such an agreement, the department could sue for injunctive relief. The Justice Department could also sue a state education agency based on the findings of an Education Department investigation.

The parents in the Texas case have already submitted a complaint to the Education Department.

The Justice Department also has the ability to enforce the nation’s disability laws, such as the Americans With Disabilities Act. Courts would have to defer to the Justice Department on enforcement actions or present a strong reason not to, said Ron Hager, an attorney at the National Disability Rights Network.

The Justice Department’s civil rights division declined to comment for this story.

DeSantis, at a news conference Thursday afternoon in Hudson, Fla., said parents should decide what’s best for their children, and young students can’t be expected to wear masks properly anyway.

“We are confident in the legal basis and merits of our position,” DeSantis’ spokeswoman, Christina Pushaw, said in an email late Thursday. “Under Florida law, parents have the right to make health and educational decisions for their own children.”

Back-to-School Plans Rocked by Delta With Delays and Quarantines

(N.C.), the top Republican on the House Education and Labor Committee, pressed Cardona in a letter Wednesday to confirm that states need not require mask mandates as a condition of receiving American Rescue Plan money. The Education Department didn’t comment on the letter before Friday.

School districts are put in “a Catch-22 position” when state laws on masking conflict with federal guidance, Francisco Negrón, chief legal officer at the National School Boards Association, said. Local leaders should be empowered to make decisions about campus mitigation measures, he said.

“A one-size-fits-all mandate, whether it’s a state or federal one, is rarely the right answer,” he said.