Joe Biden’s allies say the Democratic presidential nominee’s priorities in office would be to respond to the pandemic and restore public trust, leveraging the government’s power and scientists’ expertise to roll out a Covid vaccine.

The current lack of trust in government threatens to undermine the success of the federal response to the pandemic. Americans’ willingness to be vaccinated against the virus fell 11 percentage points since July, a Gallup poll released Monday found. Just 50% of respondents said they would agree to be vaccinated right now.

Biden, speaking at a town hall Thursday, said President Donald Trump is spreading false information about when a vaccine will be available, and is failing to plan for mass distribution.

To achieve widespread vaccination, Biden would have to convince Americans the inoculation is safe, a process critics say he undermines by questioning the safety of the Trump administration’s vaccine development. The former vice president also would have to persuade Congress to back the resources needed for a fast roll-out of the vaccines, and to make good on his promise that Americans won’t pay exorbitant prices for them.

“They have made it clear they’ll hit the ground running with a plan,” Rep. (D-Fla.), who headed the Department of Health and Human Services during the Clinton administration, said. “Congress will need to be ready with the resources and the message to get that plan into action.”

Shalala, who doesn’t consult for the transition team or the campaign, was a pivotal part of the Clinton administration’s AIDS response.

Biden’s transition team, a group of dozens of operatives working since April, is developing a plan to take over control of the federal government if the Democrat wins the November election. The work begins in earnest after the election, with meetings with federal employees and announcements about who will assume key political positions, a transition team representative said. 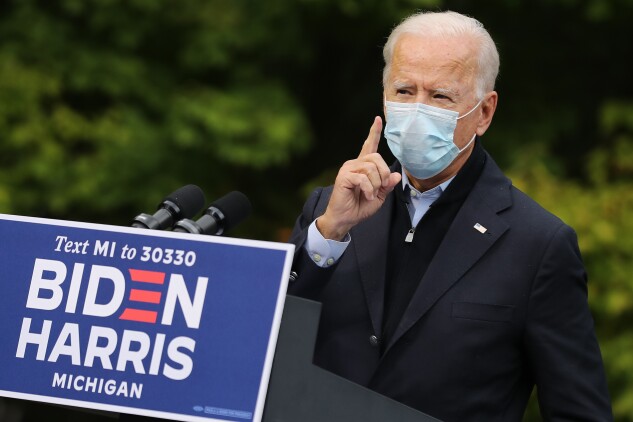 Biden and his campaign have been toying with the notion that the public can’t trust a Covid-19 vaccine approved under the Trump administration.

Biden said earlier this month that he would listen to scientists on whether to trust a vaccine, but that Trump “puts pressure and disagrees with his own scientists.” He and his campaign allies have repeatedly questioned whether Trump is rushing regulators to approve a vaccine before it’s proven safe and effective.

The Trump campaign has responded by saying that Biden is undermining public trust in the vaccine-approval process and made the public skeptical of a potential tool for ending the pandemic.

The issue put pressure on the transition team to find personnel and create plans to increase trust in the vaccine-development process and other parts of the Covid-19 response, according to two people familiar with the planning.

The team is looking at Democratic proposals on vaccine transparency such as the one published by Sen. (D-Wash.), a former colleague of Biden in the Senate, over the summer calling for more rigorous vaccine approval standards and a strategy for ensuring vaccines are free.

Biden’s pick to head HHS could help address skepticism of vaccines among people of color. Black and Hispanic Americans were less likely than White respondents to say they would take a free vaccine determined to be safe by scientists, a poll from the Kaiser Family Foundation and The Undefeated found.

The campaign has signaled recently Biden plans to name either Rep. (D-Calif.) or New Mexico Gov. (D) to become the next head of HHS. Both women are people of color who have spent their public careers focusing on challenges minority communities face. Politico first reported they are in the running.

Bass is a former physician assistant who ran a nonprofit in the 1990s dedicated to fighting the crack cocaine epidemic in south Los Angeles. Grisham, who is part of the transition team, was New Mexico’s secretary of health and helped build up the state’s public health system.

Biden has promised to spend $25 billion on vaccine manufacturing to ensure every American can get a free shot, and to prevent price-gouging by drugmakers. He would need funding and legislative changes from Congress to back up his plan.

Some lawmakers have been pushing to create price-gouging protections since the beginning of 2020 to no avail, though.

Groups that advocate for stronger consumer protections say they’re gearing up for a fight to pass drug pricing legislation regardless of who is in power in 2021.

“If Democrats have a trifecta it’s not like we’re going to get these things automatically,” Steve Knievel, an advocate for Public Citizen’s Access to Medicines program, said, referring to controlling both chambers of Congress and the White House.

Biden also said “we should be thinking about” making the vaccine mandatory during the Thursday town hall, which he indicated would require buy-in from state and local officials to enforce.

The Biden team has been planning for months the work his administration would need to do to restore faith in government more generally, a transition official said.

Public confidence in government programs, particularly those meant to respond to major disasters, can be pivotal for their success, Laurel Blatchford, who was the executive director of the Hurricane Sandy Rebuilding Task Force, said.

“As a federal leader, as the federal government, you have to be credible to be effective,” she said.

Biden’s transition could simply map out better ways to show decisions coming from the White House are subject to a fair and comprehensive process that’s based on expert advice, said Chris Lu, who served on former President Barack Obama’s transition team and was later named deputy secretary of labor. The Trump administration is often opaque about why it came to certain decisions, Lu said.

“This is an administration that largely doesn’t work in process,” Lu said.