If a world leader in science and technology can’t convince its citizenry to wear face masks amid a raging pandemic, that’s a problem.

Such is the reality that America faces as a highly transmissible virus runs riot ahead of Independence Day celebrations. With the nation setting ever higher one-day records for infections, which topped 50,000 for the first time on Wednesday, public health experts worry that not enough Americans grasp the risks — or worse, view the crisis through a political lens in an election cycle.

“What type of dystopian situation are we in, when a face mask is a political statement,” said Cameron Wolfe, an infectious-disease doctor and associate professor of medicine at Duke University. “We have got to get woken up to the fact that this isn’t going away.”

A country that’s turned out more Nobel laureates than any other, led development of the first polio vaccine and, yes, put a man on the moon is now a coronavirus superpower. The U.S. is home to the highest number of Covid-19 cases — 2.6 million and counting — and most deaths, at more than 127,000.

The floundering U.S. response has caused a heat blast of criticism directed at the Trump administration. Yet the pandemic also casts an unflattering light on deeper American maladies — politicized science, information bubbles and inequality — decades in the making that have made the country especially vulnerable.

Worldwide, the reopening of major economies in recent weeks has relied on an honor system. There’s a built-in assumption that enough citizens will be well-informed and take precautions — wearing masks, washing hands, social distancing — to prevent community spread of the virus. No country has been perfect. But the U.S. has been off-the-charts bad by any reasonable reading of the data.

While Covid-19 cases have plateaued and sloped downward in industrialized economies in Europe and Asia, the U.S. is still clocking in at record levels of new infections and accounts for 25% of global fatalities. Promising treatments are emerging, yet an effective vaccine is still months away, if not longer. 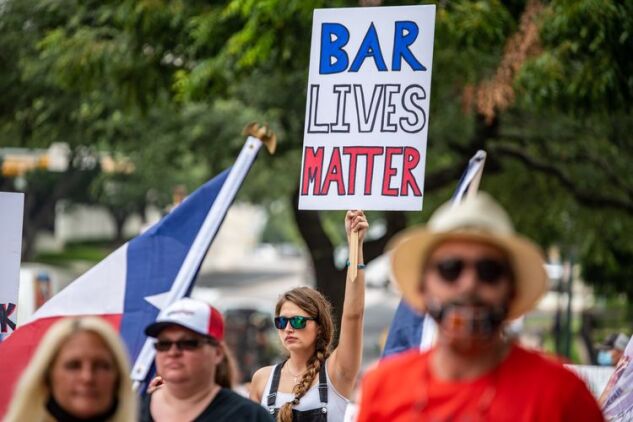 A demonstrator holds up a sign during a “Bar Lives Matter” protest in Austin, Texas, on June 30.
Photographer: Sergio Flores/Bloomberg

If the virus is not contained soon, a new surge of infections in Sun Belt states like Florida, Texas, Arizona and California could push up the daily tally to as high as 100,000, warned , the nation’s top infectious-disease fighter, in a Senate hearing this week.

“What we’re seeing over the last several days is a spike in cases that are well beyond the worst spikes that we’ve seen,” said Fauci, director of the National Institute of Allergy and Infectious Diseases, in a BBC radio interview Thursday. “That is not good news. We’ve got to get that under control or we risk an even greater outbreak in the United States.”

Videos of jam-packed bars and nightclubs from Arizona to Michigan and political rallies in Oklahoma have alarmed public health experts. Respiratory droplets traveling into the air after a person sneezes, talks or raises their voice are considered a primary transmission route. 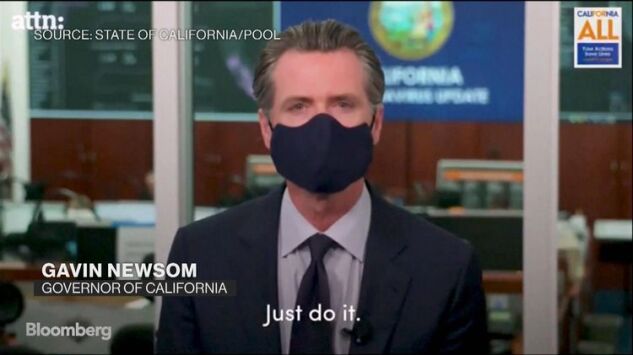 Because U.S. lockdowns were less consistently applied than those in Europe, they were also less effective, Fauci told the BBC. , director of the Centers for Disease Control and Prevention, renewed his call for masks and social distancing at the Senate hearing.

The pandemic has been a moving target for states facing different degrees of vulnerability and reopening strategies. This July 4th will be more subdued in some places, with beaches closed in Miami and events like Chicago’s lake-front fireworks display and a Beach Boys concert at the Hollywood Bowl in Los Angeles canceled.

America’s moment of ineptitude has placed President , whose poll numbers have crumbled in recent weeks, in serious political peril. Some of Americans said the administration wasn’t prepared to deal with the novel coronavirus that emerged in China late last year, according to a CBS News survey released this week.

Nor has there been unified messaging from top science advisers and the president, who has predicted the virus would vanish without a vaccine and mused about questionable treatments, ranging from the malaria drug hydroxychloroquine to . 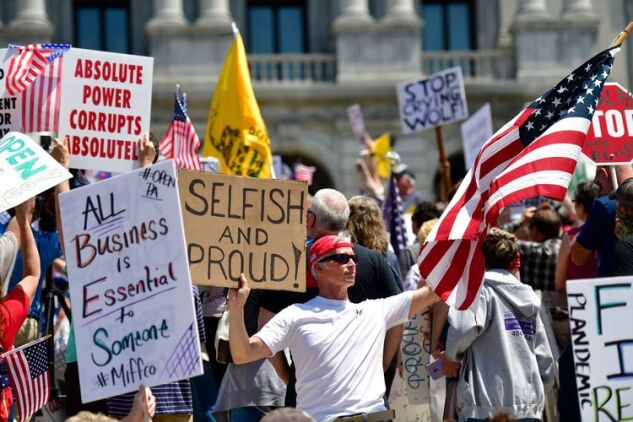 Demonstrators rally outside the Pennsylvania Capitol Building in Harrisburg on May 15.
Photographer: Mark Makela/Getty Images

Ordinary Americans aren’t laggards when it comes to basic scientific knowledge, with U.S. high-school students scoring above the average of counterparts in other advanced industrial nations, according to the latest Program for International Student Assessment, a survey of academic achievement internationally. A majority of Americans have confidence in the expertise of U.S. scientists, according to a Pew Research study.

However, party affiliation does matter when it comes to science and public policy debates. Some 73% of Democrats and Democratic-leaning independents think scientists should inform science policymaking, while only 43% of Republicans and those leaning toward the GOP do, the Pew data show.

The pandemic is far from the first time science has been politicized in the U.S. Over the years, debates have raged over the veracity of evidence-based claims about the risks from cigarettes, climate change and vaccines. Last year, Congress approved spending for scientific research into gun violence, after a more than two-decade ban on funding such studies.

Then there’s the rise of media information bubbles offering contrasting narratives about the pandemic. A peer-reviewed national study in March showed consumers of conservative media were more likely to believe that public health officials were exaggerating the seriousness of the pandemic to undermine Trump and cast doubt on promising treatments.

Social-media platforms, with billions of followers, have become super-spreaders of misinformation about the virus’s origins and treatments.

“The bots and the social media forces can be easily leveraged,” said Holden Thorp, a chemist and editor-in-chief of the Science family of journals. “You see these extraordinary things take off, where people begin to believe what can’t possibly be true.”

The strong emotions stoked by the crisis have added to the pressure on public health officials rushing to contain the outbreak while answering to the local and federal politicians who control their budgets.

By mid-June, at least two dozen local or state public health officers had resigned or been fired during the pandemic, according to a tally by the . The departures often followed disagreements with political leaders, angry protests or outright threats. 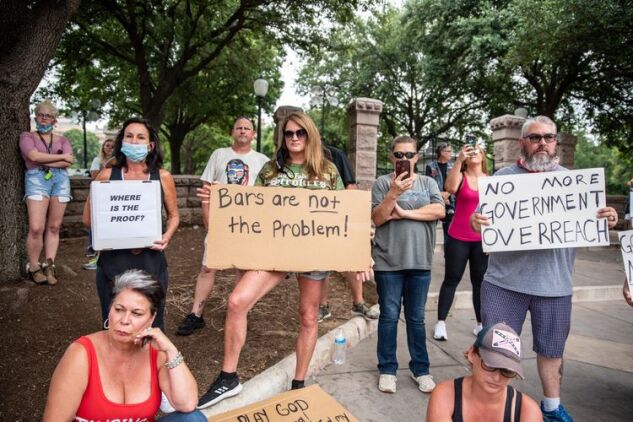 The deep divisions are reflected in the disparities in the pandemic’s impact by race and income levels. The Covid-19 mortality rate for Black Americans is about 2.3 times as high as the rate for Whites and Asians, according to the latest data compiled by APM Research Lab.

The U.S. devotes about 18% of its gross domestic product to health care, more than any other large country, but spending is overwhelmingly skewed toward medical treatment rather than public health or prevention.

Many households with income below $40,000, which the says have been hit the hardest by pandemic-related layoffs and furloughs, have lost their job-based health insurance. The government is covering the costs of Covid-19 tests and many newly unemployed will qualify for subsidized insurance. But with 27 million uninsured before the pandemic, many Americans face financial hardship if they become seriously ill or experience long-term problems after recovery.

“This virus exposes weaknesses and inequalities in any system,” said Annelies Wilder-Smith, a professor of Emerging Infectious Diseases at the London School of Hygiene and Tropical Medicine. “The U.S. has a system that doesn’t allow the vulnerable or marginalized to fall into an insurance network.”

As Americans gather for picnics, barbecues and beach-side parties, the destructive force of the pandemic will loom in the background regardless of their opinion on what it all means. Yet as the data show to an alarming degree, a divided America is an ideal environment for an opportunistic virus.

(Updates with Fauci comments in paragraphs 8-11.)

To contact the author of this story:
in London at bbremner@bloomberg.net