The sun sets April 13, 2011, over Grand Isle, La., where oil from the BP oil spill washed up.
Mario Tama/Getty Images

As the health effects of BP’s Deepwater Horizon oil spill continue to manifest in cleanup workers, attorneys warn that courts will begin to see an influx of workers seeking medical benefits from the oil conglomerate.

Miami resident Rafeal Urroz Roa filed a claim against in July, alleging that he developed chronic conjunctivitis—an eye condition—after being exposed to oil and harmful chemicals through his eyes, nose, mouth, and skin as a cleanup worker.

He says he developed the disease in 2012 because of a lack of proper protective gear. Roa’s claim is one of thousands of cases classified as back-end litigation against BP—also known as BELO cases. 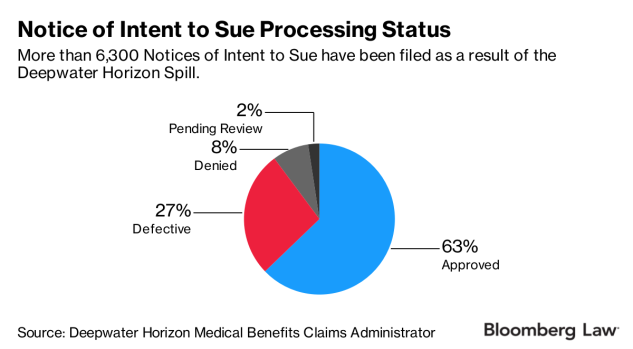 A study conducted by the Journal of Blood Disorders and Transfusion states that cleanup workers are at a higher risk of developing blood-related cancers, “altered blood profiles,” and other health issues.

In 2015, a Louisiana federal judge decided that a 2012 medical benefits settlement for victims affected by the BP oil spill didn’t preclude claimants from filing back-end litigation, which enables claims related to medical conditions that manifested after April 2012 to be heard by a jury.

Under the back-end process, a medical class member who develops a later-manifested condition but doesn’t choose to pursue workers’ compensation benefits at the time has the right to sue BP for that condition—if the person meets certain requirements set out in the medical benefits settlement.

Craig T. Downs, a Coconut Grove, Fla., attorney who specializes in BP litigation with the Downs Law Group and represents Roa, said he has seen an increase in filings of BELO cases and “the numbers of BELO continue to increase.”

The Deepwater Horizon Medical Settlement Claims Administrator has received 6,389 “Notices of Intent to Sue” BP, according to Joseph L. Bruemme, associate general counsel for Garretson Resolution Group in Cincinnati, who represents the claims administrator. According to the group’s latest report for the third quarter of 2018, more than 62 percent of claims have been approved.

“Our role as the Claims Administrator is to determine whether the Notice of Intent to Sue is compliant,” he told Bloomberg Law in an emailed statement.

Many 9/11 first responders began to develop cancers and respiratory diseases years after the 2001 terrorist attacks. For instance, the Uniformed Firefighters Association of Greater New York lists 18 firefighters who have died in 2018 and whose deaths the group attributes to 9/11-related causes. Downs said similarly, BP cleanup workers are increasingly diagnosed with diseases resulting from the spill.

Nicholas C. Rigano, partner at Rigano LLC and an environmental lawyer in Melville, N.Y., told Bloomberg Law in an email that oil spills can pose risks to human health. “Exposure on skin or inhalation of fumes can cause illness that can manifest itself immediately or down the road,” he said.

The BP spill happened with the blowout of the Macondo Well, which was drilled by the Deepwater Horizon rig on the outer continental shelf in the Gulf of Mexico, about 130 miles southeast of New Orleans.

The explosions and fire on board the Deepwater Horizon on April 20, 2010, injured 17 workers and killed 11.

Roa was hired by Cotton USA and worked cleanup in Panama City and Destin, both in Florida, and in Dauphin Island, Ala., at the time of exposure.

Cotton Logistics and Cotton Commercial USA, which do business as Cotton USA, specialize in disaster recovery and are subsidiaries of Cotton Holdings Inc. A representative from Cotton Logistics didn’t respond to requests for comment.

BP spokesman Jason Ryan, in an email to Bloomberg Law, declined to comment on the Roa case. But he said the company’s 2012 medical settlement agreement “provided a fair, reasonable and adequate resolution for legitimate medical claims stemming from the Deepwater Horizon accident.”

The settlement “provided qualified cleanup workers and residents with access to a Periodic Medical Consultation Program that provided access to a medical provider and basic testing every three years for up to 21 years,” Ryan said. “BP also funded the Gulf Region Health Outreach Program, which committed $105 million to improve access to primary and specialty medical care in communities across 17 Gulf Coast counties from Louisiana to Florida.”

Downs told Bloomberg Law that as workers begin to develop diseases resulting from oil spill cleanup, the number has increased and “they continue to increase.”