After two passengers on their luxury cruise tested positive for Covid-19 in March, Emilio and Barbara Hernandez were so frantic to get off the ship, they wrote a note to the captain.

The Costa Luminosa sailed on with them still onboard, and they ended up with the virus. Now recovering, the Hernandezes and 98 fellow passengers have sued Costa Cruise Lines Inc., a brand owned by , alleging the firm endangered passengers’ lives through negligence and bad decision-making. 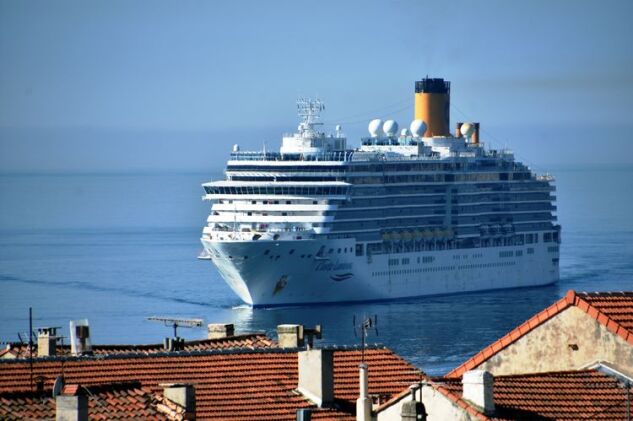 A Costa spokeswoman said the company stepped up its sanitation of ships and then took action, including quarantining passengers, after it learned of the positive test results.

The Hernandezes and their fellow plaintiffs are seeking class-action status. They may have rough sailing ahead.

The tickets that cruise passengers buy resemble legal contracts, and they generally contain language barring customers from filing class-action suits – lawsuits that allow one or more plaintiffs to act on behalf of a larger group. That’s just one of several built-in legal protections in cruise tickets meant to safeguard companies against a rash of litigation that’s already arising from the coronavirus pandemic.

“These claims are enormous – nothing the industry’s seen before with so many passengers fallen sick and bringing suit,” said Martin Davies, director of the Tulane Maritime Law Center at Tulane University Law School. Any judgments would be paid out of an insurance pool that the cruise lines have formed, Davies said.

Currently, no cruise company faces more claims related to the virus than Carnival, the industry’s largest operator. At least 22 lawsuits have been filed against Carnival-owned companies, seeking millions of dollars in damages. The company said it doesn’t comment on active litigation. 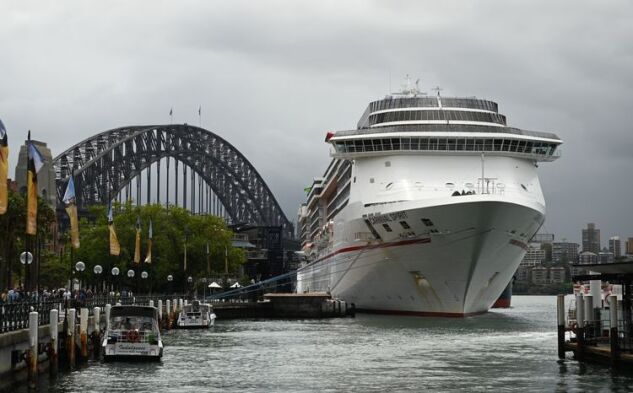 By comparison, Celebrity Cruises, owned by the second-largest company, Royal Caribbean Cruises Ltd., faces just one U.S. lawsuit so far: a proposed class-action filed by crew members who allege Celebrity failed to protect them from the virus. Norwegian Cruise Line Holdings Ltd., the third largest, faces a shareholder lawsuit that alleges the company failed to disclose adverse facts that affected it due to Covid-19. Lawyers say passenger suits against other cruise companies are probably coming.

Some of the virus-related claims, including the Hernandezes’ case, seek class-action status and involve multiple plaintiffs, totaling almost 200 so far.

But suits seeking class-action certifications face an “uphill battle,” Davies said, because of language contained in the passengers’ tickets. “Provided that’s what the contract says, generally the courts will find that enforceable.”

It’s not uncommon for big businesses of all sorts to insist on class-action waivers in their contracts, but cruise operators have a range of other legal protections as well. Some of them stem from byzantine maritime laws that date to the 19th Century, when policy makers wanted to encourage investment in the shipping industry.

“If you print out one of these tickets, it’s like 20 pages of gobbledygook,” said John Hickey, a maritime lawyer. Hickey, who spent almost two decades defending cruise operators in court, now represents plaintiffs against them. “Most people have no idea the limitations they’re presented with.”

For example, judgments for deaths that occur far from U.S. ports are limited by the Death on the High Seas Act, enacted in 1920. Most ticket contracts limit any legal actions to select federal courts, predominantly in Florida or Los Angeles, no matter where the customers live. And most of them require passengers to notify a cruise operator within six months that they intend to sue.

In general, cruise industry representatives say it’s unfair to single out cruise operators, who they say implemented more aggressive screening and prevention measures related to Covid-19 than other travel sectors did.

Cruise lines “took immediate and aggressive action based on the information that was available when it was available every step of the way,” said Bari Golin-Blaugrund, a spokeswoman for the Cruise Lines International Association. “Importantly, all decisions were based upon the expertise and guidance of prevailing health authorities.”

The U.S. Centers for Disease Control and Prevention on March 14 ordered cruise ships in U.S. waters to suspend operations after travelers on more than 30 voyages were infected with Covid-19.

The Hernandezes’ tickets for the Costa Luminosa contained a “patently unfair” prohibition on class actions, said their lawyer, Michael Winkleman of Florida. He acknowledged “significant hurdles” for their lawsuit, which alleges that the bar on class actions should be voided because Costa Cruise Lines acted “intentionally by exposing passengers to a highly contagious virus” for which there’s no vaccine. 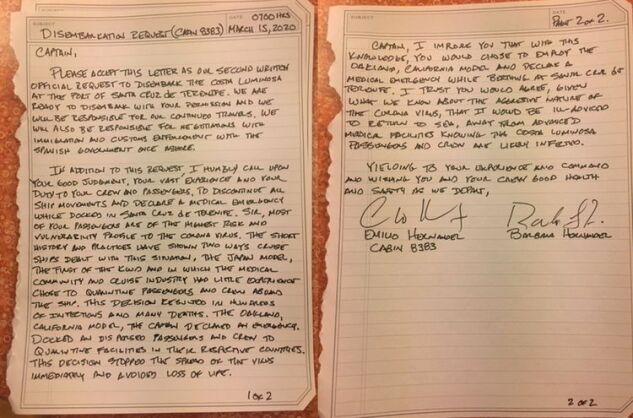 Letter to the captain from Emilio and Barbara Hernandez on March 15.
Photographer: Emilio Hernandez

If the case isn’t certified as a class action, Winkleman said, he intends to file cases for the plaintiffs individually or in smaller groups. Class-action lawsuits, which can result in larger judgments or settlements, can help to move cases more swiftly for plaintiffs. Most plaintiffs’ law firms that pursue them do so on a “no win, no fee” basis, banking on bigger payouts, said Davies, the maritime-law professor.

“The ship never should have sailed,” Emilio Hernandez, 51, said in an interview. “They put profit over the safety of passengers and crew.”

He and his wife almost canceled their March 5 sailing on the Costa Luminosa to Antigua and Europe, but Costa assured them precautions would be taken, he said. Their lawsuit alleges that the operator proceeded with the trip despite knowing that at least one passenger from the ship’s previous voyage, who disembarked Feb. 29, had coronavirus symptoms. 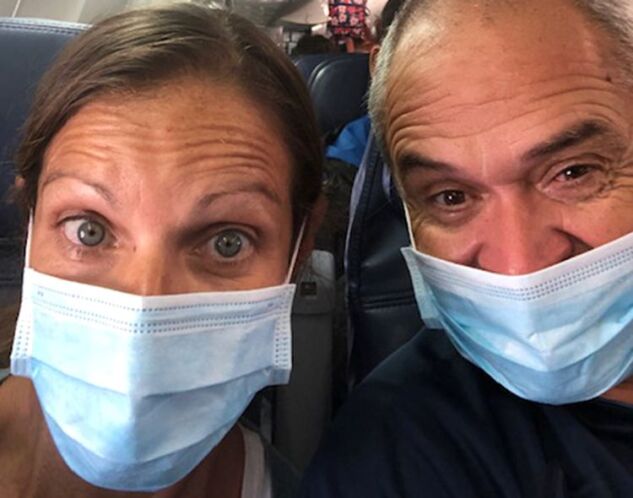 That passenger left for a medical emergency that was “not even connected to any flu-like symptoms,” said Rossella Carrara, a spokeswoman for the cruise operator’s Italian parent company, Costa Crociere Group, which is also owned by Carnival.

Sanitation procedures on the ship were stepped up ahead of the Hernandezes’ cruise, Carrara said, and a quarantine of all passengers and other measures, such as daily temperature checks, were adopted after the company learned of positive test results.

Costa has said previously that the company passed information to Costa Luminosa passengers as soon as it received it and that it suspended new cruises on March 13, the day it learned that a passenger on its cruise had tested positive.

Many of the coronavirus lawsuits filed thus far argue that the companies should have known how infectious the pathogen was after an outbreak in late February on the Diamond Princess, which is operated by Carnival’s What began as fewer than a dozen infections quickly spread to more than 700 passengers and eventually killed at least 13 despite a quarantine of the vessel off Yokohama, Japan. 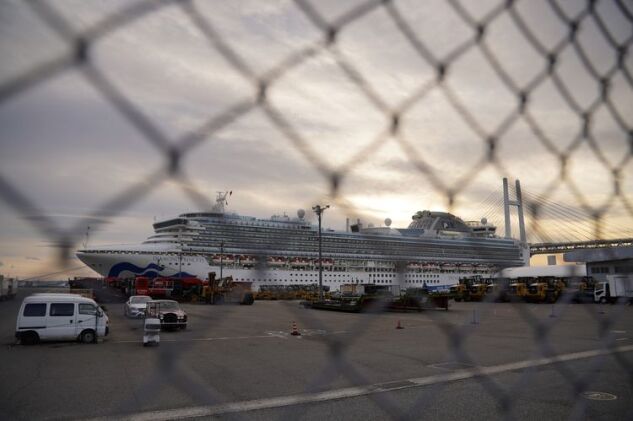 Lawsuits filed by passengers of another Princess vessel, the Grand Princess, allege that the cruise line knew some people aboard had Covid-19 symptoms when the ship docked and boarded new passengers in San Francisco on Feb. 21 for a cruise to Hawaii. The two symptomatic passengers disembarked that day; one tested positive shortly afterward and died, prompting California officials to refuse to let the ship dock.

A spokeswoman for Princess Cruises said the company’s response to the Covid-19 outbreak “has focused on the well-being of our guests and crew within the parameters dictated to us by the government agencies involved and the evolving medical understanding of this new illness.” She said the company doesn’t comment on pending litigation.

On March 4, Carnival’s Chief Medical Officer, Grant Tarling, notified passengers and crew on the Grand Princess that the CDC was investigating a cluster of coronavirus cases connected to the previous voyage, according to the Princess website. It warned the 60 or so guests who also had sailed on that trip that they “may have been exposed.” It was then – two weeks after the voyage began – that testing started, the suits allege.

When the ship was finally permitted to dock, 21 people tested positive. All American travelers were quarantined on U.S. military bases.

Carnival’s President and Chief Executive Officer, , told Bloomberg Businessweek in an April 16 article that his company’s was reasonable under the circumstances. “This is a generational global event — it’s unprecedented,” he said.

Before the new coronavirus, the cruise industry had generally avoided large-scale litigation over infectious disease outbreaks at sea. Since 2006, there’d been fewer than 10 lawsuits filed over norovirus, the notorious gastrointestinal ailment that for years has ruined some passengers’ experiences.

Yet many of the Covid-19 lawsuits raise questions about the inspections that U.S. officials instituted in response to norovirus outbreaks. Plaintiffs in the Grand Princess suits claim the cruise operator didn’t adequately sanitize the vessel between voyages. And Winkleman, the Hernandezes’ lawyer, said he plans to focus part of his cases on Carnival’s record of ship inspections and history of outbreaks at sea. 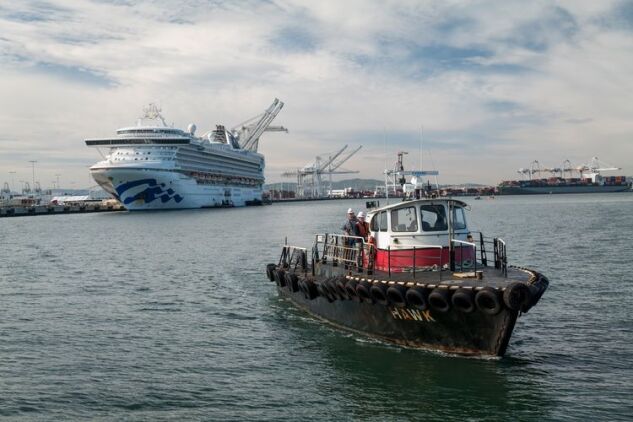 The program subjects ships that dock at U.S. ports to surprise inspections twice a year. Since 2016, ships owned by Carnival fail about 3% of their inspections. Norwegian Cruise Line has the worst failure rate at 4% and Royal Caribbean’s rate is about 1%.

Carnival spokesman Roger Frizzell noted that the company makes up about half the industry, and said its ships “typically perform extremely well” during inspections. He said Carnival-owned ships have received the highest number of perfect scores as well.

For now, with cruises canceled and the industry in a kind of suspended animation, the lawsuits and their claims represent a potential challenge that cruise operators haven’t seen before, said Ross Klein, an associate dean at Memorial University of Newfoundland in Canada who has studied the cruise industry for more than two decades. “There are still a lot of ifs” about the success of the legal claims, he said, but the risk for the companies is there.

“The industry hasn’t had any calamitous losses – nothing that would be potentially as large as this if the cases proceed in court,” Klein said.

To contact the reporter on this story:
in Hong Kong at oha3@bloomberg.net