A sign marks the location of a Marriott hotel on Nov. 30, 2018 in Chicago, Illinois.
Photographer: Scott Olson/Getty Images

The announcement of a car recall, drug withdrawal, criminal indictment, or data breach can set off a flurry of litigation activity.

Often, plaintiffs’ lawyers will file one class action after another. When many lawsuits are filed over the same incident, the cases may be consolidated in one court for combined proceedings, called multidistrict litigation.

In the case of the data breach that compromised the information of 500 million guests, over 80 consumer class actions were filed over the months following the announcement.

So how do plaintiffs’ attorneys decide if and when to join the bandwagon in a case like this? Is there value in being first, second, 10th, or even 80th?

The strategies behind when to file boil down to getting a coveted position on the leadership team once cases are consolidated, class action attorneys and civil procedure scholars told Bloomberg Law.

The judge overseeing an MDL will pick a dozen or so attorneys to lead the consolidated proceedings for the hundreds or thousands of potential plaintiffs.

The best shot for winning a leadership position is to file early, or rely on your reputation, research, or expertise to bolster a later filing, sources agreed.

Being on the leadership committee can mean more bang for the buck for the work plaintiffs’ attorneys put into a case.

“Your ability to get paid is across all however many thousands of cases there are, not just your cases,” Dan Woska in Oklahoma City told Bloomberg Law. Woska represented plaintiffs in securities and pharmaceutical cases before turning to tax law.

But that potential for a bigger payout comes with added work and responsibility, he said. The leadership team has to “muscle up” in terms of staff and front the cost of the litigation.

The value of the claims, the potential fee award, the cost of litigation, and the risk of coming away empty-handed are all parts of the equation for attorneys considering filing a case, he said.

Judge Paul W. Grimm of the U.S. District Court for the District of Maryland, who is overseeing the Marriott MDL, appointed 14 attorneys to leadership April 29.

Many of those picked filed the very day the breach was announced. Others from the most prominent plaintiffs’ firms waited a week or so to jump in. But one attorney who filed the 80th complaint still got a slot.

Some law firms rush to establish themselves as players in the litigation, Professor Nora Freeman Engstrom of Stanford Law School said.

“These lawyers may think it’s in their interest to be first out of the gates—which often means rushing out a complaint, even if it’s incomplete or rough in places—in order to plant their flags and signal their early interest and involvement,” she said. 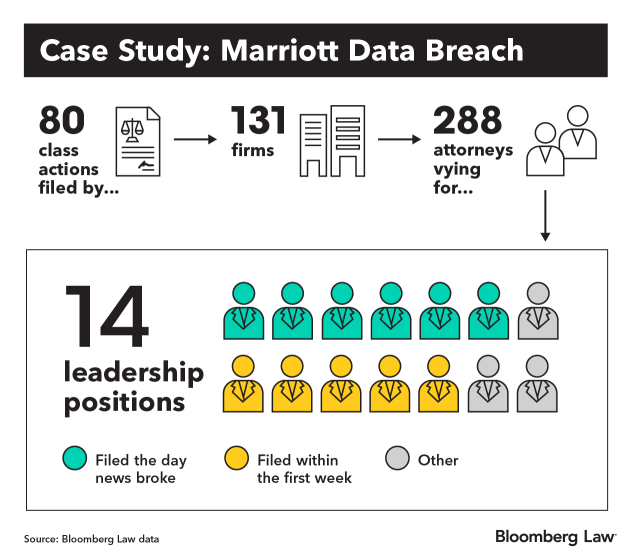 The second the news like the Marriott data breach hits the wires, plaintiffs’ attorneys start doing their research and looking for a lead plaintiff, Woska said.

He gave the example of the action attorneys take when a drug gets a black box warning from the FDA, meaning it is high risk. They dive into the facts, determine how many people might be affected, and talk to attorney contacts across the country. They ask around to see if a family member of someone in the office might have taken the drug and would be willing to serve as a plaintiff.

“You find a local person who is taking the drug and has had an adverse reaction and you get that thing on file,” Woska said.

The court will consider who filed first, and who has the most clients, when picking leadership, Professor David Noll said. “Or more importantly—it’s one of the things that the lawyers will tout when they are informally negotiating who is going to run the litigation, " said Noll, a civil procedure scholar at Rutgers Law School in Newark, N.J.

The first firm to file could be further along in the litigation than later filers in terms of getting discovery requests going and fighting dismissal attempts, defense attorney Andrew J. Trask of Shook, Hardy & Bacon LLP in San Francisco said.

There is also the publicity factor. The first firm to file gets its name out there so when people are researching the litigation, that firm pops up, he said.

“The people who have the most clients tend to be the ones who are elevated to the leadership positions,” Trask said. That can be the best way of moving up for someone who doesn’t have the experience, expertise, or reputation of more sophisticated firms, he said.

Others seek competitive advantage not in being first but in being “some version of ‘best,’” Engstrom said.

“These lawyers might not want to just zip out a complaint but, instead, may take their time to draft a complaint that is polished, comprehensive, and reflects expertise and mastery of the facts and applicable law,” she said.

Many of the better established firms like Lieff Cabraser and Hagens Berman weren’t among those who filed right off the bat in Marriott.

Because they are well known, they can wait to get involved until they have done some economic modeling and legal research, Noll said.

Lieff Cabraser filed one complaint on Dec. 7. One of its partners, Jason L. Lichtman, secured a spot on the steering committee.

Firms like these have the reputation and demonstrated expertise in managing complex cases to stand out even if they don’t file first, Trask said.

Experienced attorneys really know how to get marketing started, experts lined up, research pulled together, and how to get things going, Woska said. “They’ve done their homework before they file most of the time.”

After the first and the best firms filed Marriott complaints, the complaints kept coming.

“Just the number of filings is a pretty strong signal that the plaintiffs’ firms think there will be a pretty substantial recovery and that it’s worth investing in the litigation,” Noll said.

Sometimes the strategy is to accumulate a very strong set of clients, Woska said.

Even attorneys with later claims get a chance to be considered for leadership positions, Trask said. They still get a ticket to be “in the room where it happens,” he said.

“There is a huge advantage for those who don’t want to do that much work to file later with questionable claims and just ride the coattails of everybody doing the real work,” he said. They will still get a cut of an eventual settlement.

To contact the editors responsible for this story: at jmeyer@bloomberglaw.com; at csaenz@bloombergtax.com