Seniors at Columbia University wearing graduation gowns stand for photographs before campus closes as a precaution to the coronavirus pandemic in New York, on March 16, 2020.\
Photographer: Gabriela Bhaskar/Bloomberg

Dorm rooms in campuses across the U.S. sat empty this spring as states began lockdowns in attempts to halt the spread of the coronavirus. As students moved to online learning from their homes, they wondered what would happen to the money they paid for those empty dorm rooms.

Then sprang dozens of lawsuits on behalf of students who hadn’t received a refund for the room and board fees—and sometimes tuition—they’d paid to colleges such as the University of Arizona, Michigan State, Purdue, Columbia, Vanderbilt, Brown, Cornell, Pace, Drexel, and public university systems in California and Florida.

It’s early in the litigation for these cases, but students who attend public schools will likely be met with a defense that the institutions are immune from suit as state actors, attorneys and legal scholars say.

And while private schools can’t plead sovereign immunity, the plaintiffs in those cases, like their public school counterparts, may face difficulty in obtaining tuition reimbursement. But students, both public and private, may have a better shot at recovering for room and board.

Although the suits “probably vary quite a bit,” public schools will have a strong argument for sovereign immunity, Professor Steven Schwinn at UIC John Marshall Law School in Chicago said.

The doctrine of sovereign immunity shields states and its divisions, including public universities, from being sued without consent.

“Public universities will enjoy broad sovereign immunity from suits for money damages in both federal court and state court, unless the state has waived immunity or the plaintiffs are suing under a federal statute that abrogates state sovereign immunity,” Schwinn told Bloomberg Law.

Private universities won’t have a sovereign immunity defense and so will have to defend the suits on the merits, he said, “but what I’ve seen suggests that these claims are pretty weak on the merits,” he said. 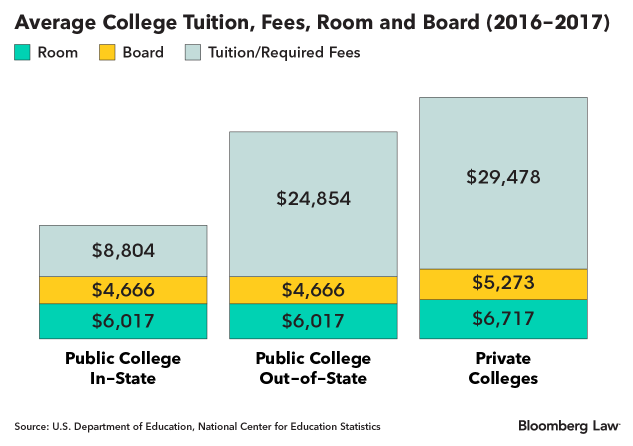 Professor Jonathan Lipson at Temple University Beasley School of Law in Philadelphia said the tuition claims may be more difficult to win than the claims for room and board. Lipson teaches contracts and other subjects.

“Common law doctrines of impossibility/impracticability/frustration of purpose should be a defense in most cases,” Lipson said.

Claims for housing and food, however, may be a different story, he said, especially if the universities realized savings due to early termination.

Adam Moskowitz, with Moskowitz Law Firm in Coral Gables, Fla., who has filed suit on behalf of students against a dozen Florida schools in state court seeking the refund of certain fees, says the plaintiffs in his case won’t face an immunity problem. Moskowitz is an adjunct professor at the University of Miami School of Law.

“Under long-standing Florida case law, the state and its agencies have waived sovereign immunity for breach of contract,” whether the suits are brought in federal or state court, Moskowitz told Bloomberg Law.

Whether the states can assert immunity is more like shades of gray than a simple binary yes or no question.

In Missouri and New Hampshire, for example, immunity is waived for all contract claims, he said. But in Colorado, a contractor can sue the government for breach of contract, but not for torts such as fraud or negligent misrepresentation.

Many state tort claims acts allow tort claims to be filed against the state in state court, but with exceptions, or provide immunity with limited waivers that apply only to certain types of claims, Wickert said.

And while plaintiffs may try to fashion their claims as equitable—seeking injunctive relief for example—rather than damages, to get around the immunity bar, the requests for disgorgement are really a request for money damages, attorney Chris Schmidt with Bryan Cave said.

Talbot, who is tracking the cases, said 144 suits had been filed as of June 2, and 44 of those are against one or more public institutions.

For many of the cases, the outcome could depend on who paid the tuition: student, parent, or a scholarship.

The students may lack standing to sue unless they can show that tuition, room, board and fees actually came out of their own, rather than their parents,’ pockets, Schmidt told Bloomberg Law.

The suit against the Arizona schools, for example, is bought by parents. But most of the cases name students as plaintiffs, including suits against Pace, Columbia, the Florida Board of Governors, Michigan State, and the University of California system.

All plaintiffs must also show a damages model that can apply broadly to a large group of students or parents in order to win class certification, Talbot said. “But how can they when there is so much variety?” she asked.

Some students utilize special resources that others don’t, including those with learning disabilities. Some lived on campus, while some didn’t. Some never went to the library, while others went every day, Talbot said.

“Did the individual student receive grants or scholarships? Did the family receive education at a discounted price? These issues will require an individualized determination,” Schmidt said.

No Claim for Tuition

Attorney Adam J. Levitt with Dicello Levitt Gutzler in Chicago, which filed the suit for declaratory and injunctive relief against the Arizona Board of Regents in federal court, together with the Law Offices of Matthew S. Miller LLC, said he’s undaunted.

The complaint seeks to enjoin the board “from retaining the pro-rated, unused portion of monies paid for room and board and fees,” and to equitably disgorge those funds to their rightful owners.

The Arizona Attorney General’s Office concedes that the Public Entity Claims Act, which shields the state from claims for damages doesn’t extend to claims for injunctive, equitable or declaratory relief, under state court precedent. But the AG argues that the case is really a suit for damages.

“We believe our claims don’t implicate sovereign immunity,” Levitt said, adding that the case law supports the kind of claims being filed.

Levitt stressed that his firm has filed claims only for room, board ,and fees, not a tuition refund, as other plaintiffs have.

“If I thought we had a viable claim for tuition refund, I would have filed it,” Levitt told Bloomberg Law.

“The colleges have tried to keep students on track. Does anyone really want to learn on Zoom? Not really. But does work get done? Yes. It’s an imperfect solution to a problem no one wants,” he said. “In contrast, schools have no business keeping room, board and fees for things that are impossible to provide.”

Citing his own school’s action, Professor Lipson at Temple Law School said the school refunded housing and food expenditures, “which caused the university a significant loss.”

“I don’t know whether other schools are refunding those expenses or, if not, what the underlying contracts say. If there is a force majeure clause, the school might have an out,” he said.

Force majeure clauses relieve the parties of liability for uncontrollable events such as an act of war that prevents the fulfillment of the contract.

“If the university took a loss, for example because the food service contract was take or pay, I find it hard to believe any court would hold any university liable,” Lipson said. “But, you never know.”