The Competitive Enterprise Institute, a prominent Washington-based libertarian think tank, distanced itself from remarks its litigation director made on Twitter questioning the motives of the woman accusing U.S. Supreme Court nominee Brett Kavanaugh of sexual assault.

Christine Blasey Ford’s allegations against Kavanaugh may be the “best career move” the “mediocre academic at a fifth tier school” ever made, Ted Frank said in a series of tweets Sept. 18.

Frank is the director of litigation at CEI and director of the group’s Center for Class Action Fairness. He is best known as a prolific class-action objector, frequently challenging class settlements over attorneys’ fees and other perceived problems.

Ford, a professor at Palo Alto University, trains graduate students in clinical psychology in a consortium with Stanford University, according to the Washington Post. Her work has been widely published in academic journals.

“Ted Frank’s personal views shared on his Twitter account do not reflect the views of CEI,” a spokesman told Bloomberg Law. “This is not an issue in which CEI is involved. CEI believes claims of sexual assault should always be taken seriously.”

Several attorneys leaped to Ford’s defense and disputed the notion that sexual assault allegations would help Ford professionally. Usually such allegations have the opposite effect, they said.

Women who publicly challenge discrimination or sexual harassment “put their credibility, reputations and professional careers on the line to do so,” said Campbell, who now has her own firm, KCampbell-Law PLLC in Washington.

They must face “wrongful denigration of professional and intellectual competence, attacks on credibility, name-calling (typically some variation of “nut or slut”) and/or being cast as an opportunist looking for an undeserved pay day or leg up in our career,” she said.

“The notion that women make assault allegations for professional advantage is both demonstrably false and utterly disrespectful to the harm women have suffered and for which they did not volunteer,” Kelly M. Dermody a plaintiff’s lawyer at Lieff Cabraser Heimann & Bernstein LLP in San Francisco told Bloomberg Law. Frank has challenged class settlements negotiated by Lieff Cabaser attorneys.

Frank’s comments came in response to a tweet from Matthew Dowd, chief political analyst for ABC News, suggesting Ford has nothing to gain from coming forward.

Frank also compared Ford to Anita Hill, who accused current Supreme Court Justice Clarence Thomas during his confirmation hearings in 1991 of engaging in sexual harassment when they worked together at the Equal Employment Opportunity Commission.

Frank implied Hill’s harassment allegations helped her secure tenure at his alma mater, Brandeis University in Waltham, Mass., “without a Ph.D. or publishing anything of consequence.”

Hill teaches social policy, law, and women’s studies at Brandeis, where Frank went to college. She was a professor of commercial law and contracts at the University of Oklahoma law school at the time of Thomas’s confirmation hearings, and has a law degree from Yale University in New Haven, Conn. 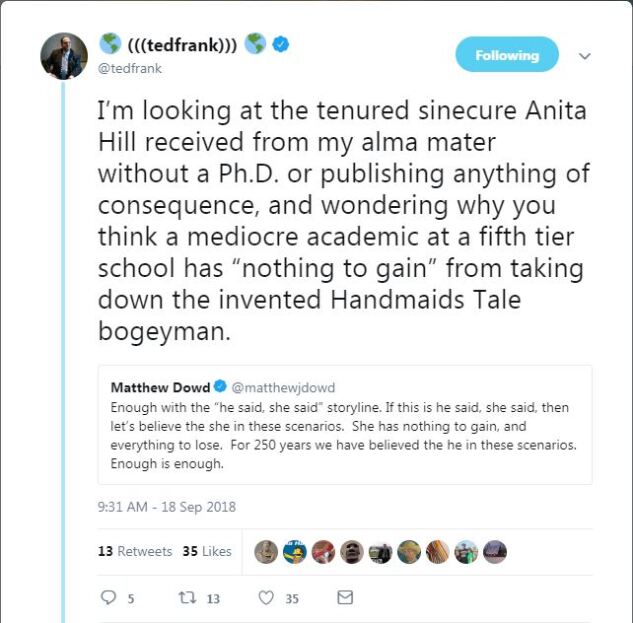 Frank also implied political motivations behind Ford coming forward with the assault allegations, saying she was from the “bluest blue” part of the country.

When asked to clarify his tweets, Frank told Bloomberg Law they were “a rebuttal to a trivially tendentious statement by Matthew Dowd.” He took down the tweets Sept. 19.

Dermody, of Lieff Cabraser, pointed to the tweets as an example of why women don’t report assault. “When women do so they are re-victimized by people who blame them for men’s misconduct, attack their character and background, and/or make outrageous claims that the women are motivated to lie for advantage,” she said.

Hill earned her law professor jobs “based on her work and smarts,” Litman said. “She was forced to leave them because of threats to her and her family and her employer that came because she publicly accused a man of sexual harassment.”

Ford has also faced death threats since she came forward, Litman said. “She has no idea how this ends, or might end,” she said. “But she was certainly right in predicting that in the short term it would be personal ‘annihilation.’”

Against Decorum, Not Court Rules

In an interesting twist, Frank will argue his first case before the Supreme Court Oct. 31.

Frank’s suit concerns whether it was fair to Google users to distribute the bulk of an $8.5 million privacy class settlement to consumer privacy groups instead of the users. Frank argues such distributions to charity groups are improper.

A legal ethics expert said most attorneys appearing before the Supreme Court would avoid questioning the motives of someone whose testimony could impact the court’s makeup.

“Serious Supreme Court litigators would refrain from doing what Frank has done simply out of a sense of propriety and decorum,” ethics expert Stephen Gillers of New York University School of Law told Bloomberg Law.

And Frank isn’t the only public figure to come under fire for social media posts about Ford and her allegations. Senator Jeff Flake (R-Ariz.) on Wednesday went after Donald Trump Jr. on Twitter over an Instagram post comparing Ford’s allegations to a grade-school crush.

As reported by Bloomberg News, Trump Jr.'s post pictured a note in childlike handwriting that says: “Will you be my girlfriend, Love Bret,” with boxes to check “yes” or “no.” It’s captioned, “Judge Kavanaughs sexual assault letter found by Dems...”