Soldiers from 2nd Platoon Fox Co. of the 2-506th Infantry Battalion of the 4th Brigade of the 101st Airborne Division conduct a counter indirect fire patrol from their base at COP Sabari in the Sabari district of Khost province, Afghanistan, on Sunday, June 30, 2013.
Photographer: Victor J. Blue/Bloomberg

U.S. combat troops were deployed to Iraq and Afghanistan with protective earplugs that they may not have known how to fit properly, and some employees of manufacturer didn’t believe soldiers needed to be told how to adjust the devices, according to unsealed depositions by company officials in a mass tort lawsuit.

In the depositions, reviewed by Bloomberg Government, 3M officials couldn’t point to documents or calls in which U.S. military representatives were told that the earplugs can imperceptibly loosen. Yet internal memos acknowledged “the existing product has problems unless the user instructions are revised,” according to Elliot Berger, division scientist for 3M’s Personal Safety Division.

In addition, Timothy McNamara, 3M’s sales manager for the U.S. Midwest, said he didn’t “believe so,” when asked during his deposition whether soldiers were entitled to know that the way the company tested the earplugs—and achieved a high noise reduction rating—was different than the way service members were instructed to use them.

McNamara, who visited military bases on a regular basis, also acknowledged he never shared how to use the earplugs in order to achieve the advertised noise-reduction rating.

The company denied in a statement that the earplugs were defectively designed and that information was withheld from the military.

3M— which bought dual-ended earplugs maker Aearo Technologies Inc. for $1.2 billion in 2007—is defending what’s likely to become one of the largest mass tort litigation cases in the U.S., with at least 140,000 claims against the company. They include almost 23,000 personal-injury suits filed by veterans in March alone, according to the Transactional Records Access Clearinghouse at Syracuse University. Veterans complain of hearing loss and tinnitus, or ringing in the ears, from wearing the earplugs during their military service.

The St. Paul, Minn.-based company is awaiting a ruling by Judge of the U.S. District Court for the Northern District of Florida on a centerpiece of its defense: that 3M is immune from liability because it acted as a government contractor. The depositions were unsealed ahead of that ruling.

The U.S. Supreme Court ruled in the 1988 case Boyle v. United Technologies Corp., U.S., 86 492, 6/27/88 that state-law design defect suits can be barred when the federal government “approved reasonably precise specifications,” the equipment conformed to them, and the supplier warned the government about dangers “that were known to the supplier but not to the United States.” The depositions by company officials appear to raise questions about whether 3M met the obligation to warn the military about dangers with the earplugs.

“As noted in 3M’s briefs, the company worked in close coordination with the U.S. military on the CAEv2 product and informed the military that the company’s testing had shown that the military’s decision to shorten the CAEv2 created potential fitting issues,” Fanna Haile-Selassie, a company spokeswoman said in an email statement. “The U.S. military was aware of those issues and the need to train users of the product to fold back the flanges on the opposite end, as needed, to get a good fit.”

“We deny that any information was withheld from the government, and we deny that this product was defectively designed,” she added. “We will vigorously defend ourselves against such allegations.”

Earplugs are as essential to soldiers in the field as helmets, eye protection, and flak jackets, given that automatic gunfire, artillery, and explosions can generate noise at at least twice the decibel level that can cause hearing loss. Service members refer to them as an “inspectable item,” like military IDs and dog tags.

“3M peddled these earplugs to the public and the United States military despite knowing they were dangerous and defective, perpetrating an ongoing fraud on our country and its citizens,” the plaintiffs’ lawyers, led by Bryan Aylstock of Aylstock Witkin Kreis & Overholtz, PLLC; Shelley Hutson of Clark, Love & Hutson GP; and Christopher Seeger of Seeger Weiss LLP, said in an e-mailed statement.”The government never approved specifications for the Combat Arms Earplug v2, and 3M has already paid $9.1 million to the federal government to resolve allegations that it concealed the product’s defects and dangers from the military.” 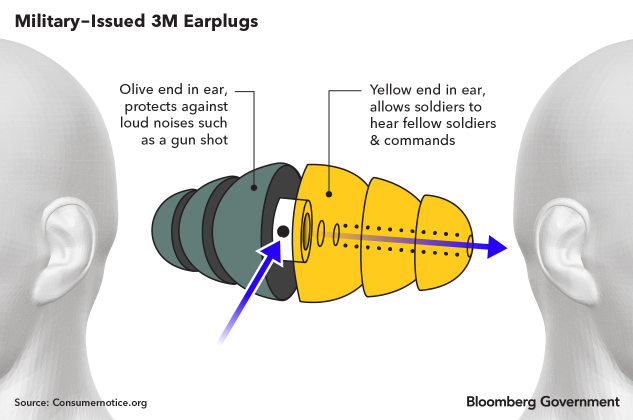 The Combat Arms Earplug Version 2, issued between 2003 and 2015, had different ends to protect users in different circumstances. The green end of the earplug, when inserted, was designed to block all sound, while the yellow end was meant to block out most noise while still allowing the wearer to hear commands and fellow troops.

Plaintiffs in the lawsuits say the earplugs were too short for some ears and didn’t provide a protective seal, and were faulty even as the company was marketing them.

An Army request for the earplugs to be shortened to fit in the standard carrying case resulted in some users having to roll back of the the cone shaped ends of each earplug, known as flanges, to fit snugly in the ear and seal out the noise. That request came in 1999 to Aearo, which shortened the stem, without further military guidance, according to the plaintiffs’ brief.

The plaintiffs and 3M each filed briefs with the court on April 1 seeking rulings on the 3M defense. The plaintiffs cited Berger’s deposition and other testimony in trying to knock the defense out.

3M argued the government understood the consequences of shortening the product’s length, and that the earplugs weren’t dangerous because they provided sufficient attenuation without the flanges rolled back. The “undisputed evidence is clear that Aearo did tell the military about the fitting issues,” it said in an April 14 brief. Further, the military did its own testing, the company said.

(Updates with comment by plaintiffs’ lawyer in 12th paragraph.)

To contact the editor responsible for this story: at phendrie@bgov.com