Some of Wall Street’s biggest buyers of America’s state and local government bonds are starting to ask questions about racial equity.

Five investment giants -- , , ., and -- are working with two minority-owned underwriters, and , to develop and distribute a questionnaire that governments will be asked to fill out before new bond deals are arranged. It will ask about policing policies, efforts to combat race-based inequality, social services and the demographic breakdown of the government’s workforce, among other things.

“The pandemic has brought up the broad range of inequity in our society and it’s important to understand how everyone is working on that,” said , head of municipal bonds at Lord, Abbett, which manages about $36 billion of the securities.

“We want to engage: we can ask questions, we can compare different issuers for what they’re doing,” Solender said. “It’s important for us to know what we’re investing in.”

The push reflects the growing influence of the socially responsible investment business, with Wall Street funds eager to cater to investors seeking to use their funds to combat global warming or promote societal change.

The industry has been making inroads into the $4 trillion municipal securities market, a slow moving haven of buy-and-hold investors seeking tax-free income.

But the market has broad reach that’s drawn attention from activists, since it finances everything from hospitals and water systems to sports stadiums and legal settlements for . And governments themselves have started courting the do-good investors: they sold a record $10 billion of so-called social debt so far this year, and they frequently put green-bond labels on debt issues that finance public transportation, energy efficient buildings and other projects with environmental benefits. 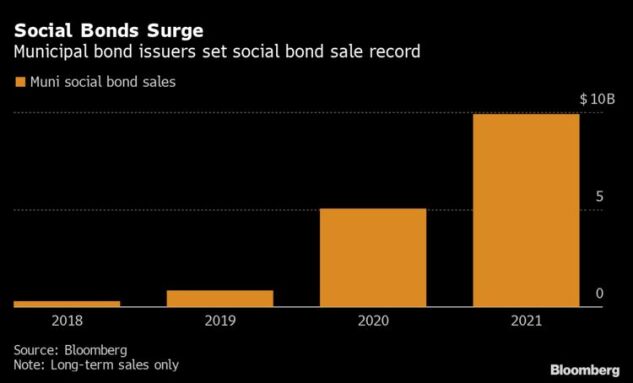 The questionnaire project, called the Municipal Issuer Racial Equity & Inclusion Engagement Framework, marks a step to provide more information to investors interested in how cities are working to address the nation’s legacy of racial inequality. It was organized in part by the non-profit JUST Capital.

The protests that gripped the U.S. in the summer of 2020 underscored the need for investors to know what cities are doing to promote racial equity, said , head of municipal ESG at . She said that eventually the responses may help investors decide what to buy.

“There may be a time where we look to invest in certain issuers because they are willing to engage with us,” she said.

The firms aren’t bound to use the information in their investment decisions, nor will the underwriters require governments to participate. Yet backers said the involvement of such massive investment companies gives the project significant heft and lets governments know that social concerns are beginning to matter to buyers of their bonds.

“These are among the largest municipal bond holders; they are mammoth institutions that can impact pricing levels on municipal bonds and their position is that we need this information,” said , chief executive officer of underwriter Siebert Williams Shank. “Issuers want to access the best rates at the best time in the market. If investors are demanding this, we want to make our issuer clients aware that this is something that will be increasingly scrutinized.”

, who oversees about $183 billion as the head of state and local government debt investing at BlackRock, called the survey a first step.

“This will continue to evolve,” he said, noting that the use of the data to determine which bonds to invest in is “a bit down the road.”

To contact the reporter on this story:
in New York at dmoran21@bloomberg.net