A new Senate proposal to legalize marijuana would let cannabis companies use banking services and trade on major stock exchanges, according to a person involved in negotiations on the legislation, a potentially dramatic breakthrough for an industry long stymied by federal restrictions.

The sweeping new legislation, a draft of which Senate Democrats plan to release Wednesday, would also direct some tax revenue from marijuana sales to minority communities, which faced disproportionate arrests for marijuana possession, keep some federal drug testing provisions, and give the U.S. Food and Drug Administration oversight of cannabis regulation, the person said.

Past proposals to legalize marijuana have stalled amid a lack of support from Republicans. The new Democratic proposal, from Senate Majority Leader , Finance Committee Chairman and New Jersey Senator , is more comprehensive than previous efforts in how it addresses regulations.

“It is time for Congress to end the federal marijuana prohibition and reinvest in communities most impacted by the failed War on Drugs,” Booker said. 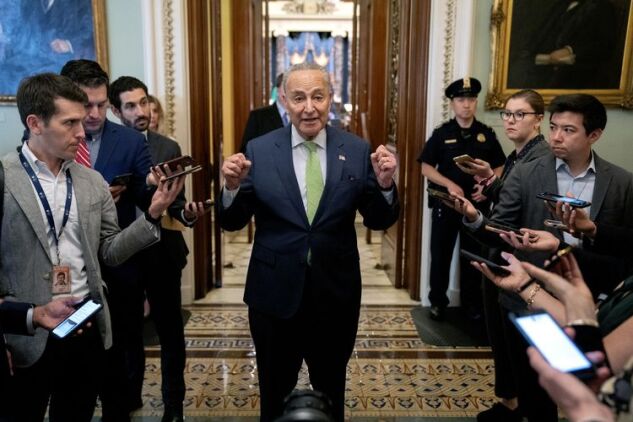 According to details of a discussion draft obtained by Bloomberg, Democrats’ proposal would legalize and regulate marijuana at the federal level but allow states to keep their own penalties. While it stipulates that states can’t prohibit cannabis crossing their borders for transport to another state, it leaves open questions about the controversial topic of interstate commerce -- which would affect large multi-state cannabis companies.

Nonviolent federal marijuana offenses would be expunged from records, and those convictions would no longer be used to deny federal benefits or affect immigration status.

The decision not to pursue abolishing federal drug testing was controversial, and is likely to be a hot topic among senators, according to the person involved in negotiations over the past year.

Taking marijuana off the list of controlled substances, rather than simply re-listing it as a less dangerous drug or decriminalizing possession, would remove the most difficult regulatory burdens from U.S. marijuana companies, allowing them to take tax deductions, hold bank accounts and loans, and list on U.S. stock exchanges such as the Nasdaq and the NYSE.

A new federal excise tax would phase in over several years to 25%. The first $20 million in sales per company would have a 50% cut in the tax rate, an attempt to encourage smaller marijuana businesses.

Proceeds would pay for a trust fund to reinvest in communities most impacted by the drug war, as well as public health and safety research. The proposal also seeks input on whether research dollars could be steered specifically to Historically Black Colleges and Universities.

VIDEO: How do states legally get around the federal ban on cannabis, and what unique legal challenges do attorneys and businesses in the marijuana industry face?

Marijuana would be regulated by multiple agencies including the FDA; the Alcohol and Tobacco Tax and Trade Bureau; and the Bureau of Alcohol, Tobacco, Firearms and Explosives. The bill would give the FDA oversight not just of pharmaceutical products that involve cannabis, but also of food products, the person said. As of the most recent draft, it was unclear whether premarket approvals would be needed for cannabis products.

The Transportation Department and the Department of Health and Human Services would be directed to collect data on cannabis-impaired driving and do research that could lead to a standard for impaired driving -- as that and the effect of the drug on fetal development are among “crucial gaps” in understanding the already widely-used substance, according to the discussion draft summary.

The senators are asking for feedback on the legislation by Sept. 1 as they prepare to formally introduce the measure.

(Adds details of the proposal, starting in fourth paragraph)

To contact the reporters on this story:
in New York at tkary@bloomberg.net;
in Washington at sdennis17@bloomberg.net