Senate Majority Leader said the marijuana legalization bill he’s introducing would be a major step toward an overhaul of U.S. drug laws, but the proposal has a long and uncertain path to passage.

The proposal from Schumer, Senate Finance Chair and New Jersey Senator was presented as a long-awaited compromise to making cannabis legal, taxable and regulated at the federal level. Because it would take marijuana off the list of controlled substances, it would open up banking and stock exchanges to cannabis companies. 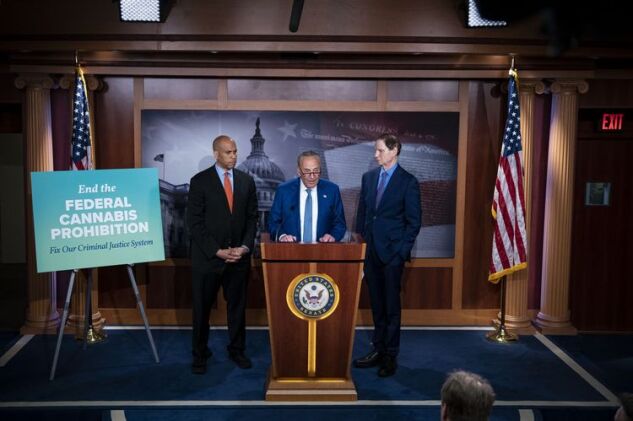 “America is on our side,” Schumer said at a news conference Wednesday, where he vowed to make passage of the legislation a priority. “Seventy percent of Americans support legalizing adult use of marijuana.”

Even so, cannabis stocks on Wednesday due to skepticism over the bill’s prospects. Experts are questioning whether there’s enough political support for such a sweeping proposal, which includes so-called social equity programs that would help communities harmed by disproportionate drug arrests in the past.

It goes beyond mere decriminalization, which President Joe Biden said he supported during the campaign, and that may be a difficult vote for Democrats from more conservative states -- as well as for many Republicans.

“The reality is there just aren’t the votes for comprehensive reform. This will get whittled and beaten down,” said , the chief investment officer of CB1 Capital, a New York-based fund focused on global cannabis.

Harrison said that the provisions allowing cannabis firms access to the banking system and listing on U.S. stock exchanges likely will survive. “It’s the only thing that has buy-in from all sides,” he said.

One of U.S. cannabis stocks fell more than 3% on Wednesday after the draft bill was released. A similar index that includes a mix of international and Canada stocks almost 4%.

Booker said he is open to compromise, but won’t stand for a narrow banking-only legislation that would ignore issues of “restorative justice.”

“I have no patience for people who just want to get some ease in the banking regulations so that their profits could go up, who don’t give a damn about people in communities that really struggled with this,” Booker said.

Taking marijuana off the list of controlled substances, rather than simply re-listing it as a less dangerous drug or decriminalizing possession, would remove the most difficult regulatory burdens from U.S. marijuana companies. It would allow them to take tax deductions, hold bank accounts, get loans and list on U.S. stock exchanges.

Schumer acknowledged the bill’s supporters don’t have the necessary votes yet, but that the group will lobby colleagues in Congress and ask the White House for support.

, a Denver-based lawyer with Perkin Coie LLP who advises both U.S. and Canadian cannabis companies, said there’s a lot to like about the “comprehensive and thoughtful” 163-page bill, which has “robust criminal justice and social equity reforms.”

But he said there’s a lack of clarity about how state and federal authorities will interact on key areas like the licensing of cannabis producers, and there’s no mention of how interstate commerce will work.

“That’s the big kahuna,” Kline said in a phone interview. “From my position, we can’t just flip a switch, there needs to be harmonization between state and federal law.”

The tax rate it calls for -- 25%, which would be layered on top of state taxes that are already 25% in some jurisdictions -- is simply too high, he said.

“I understand why the federal government wants the revenue to pay for social justice initiatives and regulatory costs, but if we could get that tax rate down to a more manageable number, that would encourage people to buy from the regulated market,” he said.

The bill’s most salient challenge may be that it’s not the political compromise that many had hoped for, Cowen analyst said in a Tuesday research note. He said it’s not clear whether the bill would get the backing of every Democrat, much less the needed Republican votes. It needs 60 votes in the Senate.

“We believe this legislation is designed to fail. It is close to everything that progressives want, while providing little reason for Republican senators to back the measure,” he wrote. Seiberg predicts that once Schumer is ready to move beyond this broad bill, an expanded version of a prior bill that focused solely on banking -- the SAFE Act -- could pass in the second half of 2022.

Until then, he said, the bill looks merely like “a political effort designed to boost Schumer and other Democratic senators in the 2022 primary and general election fights.”

(Updates to include cannabis stocks’ reaction.)

To contact the reporters on this story:
in New York at tkary@bloomberg.net;
in Washington at sdennis17@bloomberg.net