In light of Me-Too, the social justice movement, and the conviction of R. Kelly, are Black women finally taken seriously when they raise issues of harassment or assault? Or are those still thought of as White professional women’s issues?

Of all the debates I’ve had about Anita Hill over the years, this one still sticks in my craw: “Clarence Thomas didn’t do anything wrong,” said a lawyer friend of mine. “That’s just the way Black men relate to Black women.”

It was a stunning remark coming from the mouth of a White male—a liberal, no less.

But that conversation took place in the fall of 1991—during the confirmation hearings of Clarence Thomas to the U.S. Supreme Court—long before “mansplaining” entered our lexicon. At the time, I didn’t know how to respond to his “You just don’t get Black culture” argument. I only knew it struck me as ridiculous and unfair.

Unlike many Americans at the time, my friend didn’t actually doubt Hill’s veracity. (Hill alleged that Thomas, when he chaired the Equal Employment Opportunity Commission, often talked about pornography and made lewd references at work.) A New York Times poll taken a few days after the hearing found that Americans overwhelmingly believed Thomas—58% said they believed Thomas v. 24% for Hill. In contrast, my friend thought he was being “culturally sensitive"—however misguided.

During the hearings, no one explicitly argued “culture” as a defense, but to me there was a subtext that a Black woman had no right to raise the issue of sexual harassment.

What’s clear is that the Republicans did a spectacular job of diminishing Hill. In her recently released book, Believing: Our Thirty-Year Journey to End Gender Violence, Hill recounts how Senator Arlen Specter dissed her harassment claims with five words: “This is not so bad.” At the same time, Specter also accused her of committing “flat-out perjury,” suggesting that those “not so bad” incidents weren’t even true. His message was clear: This woman shouldn’t be taken seriously or believed. “Specter had made his point, signaling his empathy—or himpathy—for Thomas,” writes Hill. 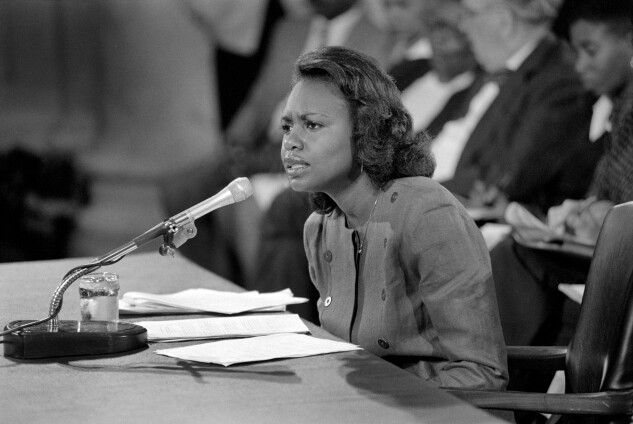 Anita Hill testifying in front of the U.S. Senate Judiciary Committee during the 1991 confirmation hearing of Clarence Thomas to the U.S. Supreme Court.
Photo by Universal History Archive/Universal Images Group via Getty Images

For whatever it’s worth, Christine Blasey Ford, a White woman, was also treated with condescension by members of the Senate Judiciary Committee when she testified in 2018 about her alleged sexual assault by Brett Kavanaugh when both were teenagers. And like Hill, her detractors portrayed her as either a liar or a wack job. It’s cold comfort that sexism cuts through racial lines.

That said, I think the Hill/Clarence situation was far more complicated—a toxic concoction of racism and misogyny—that went beyond the usual “he said/she said’’ debate.

The notion that Black culture is highly sexualized runs deep, says Michele Goodwin, a law professor at University of California at Irvine: “There’s been the stereotype that Black women like this sort of treatment, that they have no moral compass, that both Black women and men have no innate sense of professionalism.”

That stereotype feeds into the idea that Black women, even someone like Hill with a degree from Yale Law School, aren’t capable of being a professional—and shouldn’t have expectations of being treated as such. “That way it allows us to say that laws like Title VII and Title IX don’t apply to them because they’ve somehow given consent,” says Goodwin. In other words, complaining about harassment in the workplace is a White woman thing.

Thomas cynically exploited that dynamic when he called the hearings “a high-tech lynching for uppity Blacks,” putting his critics on the defensive. After that brilliant performance, Senate Judiciary Committee Chair Joe Biden decided to block the testimony of four other Black women who were ready to corroborate Hill’s charges, paving the way for Thomas’ nomination.

But Hill faced not only powerful White male detractors—yes, there were only White males on the Judiciary Committee in 1991—but resistance from the Black community too—another twist of sexism. 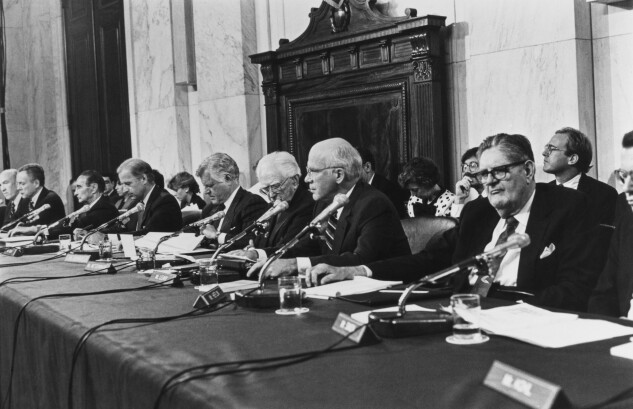 Members of the Senate Judiciary Committee in 1991 during the testimony of Anita Hill at the confirmation hearing of Clarence Thomas to the U.S. Supreme Court.
Photo by Laura Patterson/CQ Roll Call via Getty Images

“I had been shamed by Black people for testifying about Thomas’s harassing behavior toward me,” she writes in her book. “While many Black people had written their support, some painted me as an ingrate who had ruined the life of an important African American man who had helped my career.”

“Black people felt conflicted by Thomas but more than anything else they wanted a Black person on the Supreme Court,” explains Rick Banks, a Stanford Law School professor and co-founder of Stanford Center for Racial Justice. “Anita Hill was regarded as standing in the way of progress; she was bringing the brother down.”

Goodwin is more blunt on this point. She calls Black women “euphemistic roadkill” on Thomas’s path to glory. In a recent essay in The Nation, she elaborates: “What remains troubling is that in lifting up Clarence Thomas, far too many Black men were willing to pull down Anita Hill—and by extension so many other Black women and girls who endured sexual and physical harassment and violence.”

But 30 years have elapsed since those hearings, and the gender and racial landscape has undergone seismic changes, particularly in the last few years. In light of Me-Too, the social justice movement, and the conviction of R. Kelly, are Black women finally taken seriously when they raise issues of harassment or assault? Would an Anita Hill today—a Black professional woman—be accorded more respect?

“I think she’d be treated better but the outcome would be the same,” says Michele Coleman Mayes, the general counsel of the New York Public Library and former chair of the ABA’s Commission on Women. “Christine Blasey Ford was treated with more respect—they said, we’ll listened to you carefully and take all the time you need to answer questions—but they still conducted a sham investigation [into her allegations], and she didn’t get her due.”

But what about the Me-Too movement and the conviction of R. Kelly—aren’t they signals that this is a new day for Black women? “In R. Kelly’s case, there was overwhelming evidence, and it’s the same with [Harvey] Weinstein,” says Mayes. “You have to ask, how many women need to line up before they’re taken seriously?” She adds, “Sexual harassment is still happening in law firms.”

Goodwin also is not convinced that we’ve gotten over the idea that raising issues of harassment and assault is largely a White woman’s prerogative. “Black women continue to confront impediments and barriers, when reporting harassment, sexual assault, and rape—as well as doubts about their credibility—from McDonald’s to elite offices. Addressing sexual harassment and assault is a work in progress.”

“We need to address abuse of women in communities of color,” says Goodwin. “There’s been internalized, inter-generational suffering that doesn’t get voiced.”

Of the three commentators I spoke with, Banks is the most hopeful. “Times have changed; the culture has changed,” he says. “We have Black women in Congress, and we have a Black female vice president.” Moreover, he notes, “Black women are doing better than Black men; more are graduating from college, law school, and other graduate schools. It’s a reverse gender gap.”

With all the successes that Black women have achieved, would an Anita Hill of today not face the hostility she experienced then?

But reading Hill’s book, I’m not so sure she’s quite so hopeful. “Young Black women still struggle with how they can bring complaints of any kind given the stereotypes about Black women that render them untrustworthy or not worthy of protection from gender-based violence. The conflict is even more complicated when Black women complain about the behavior of Black men.” She adds, however, “increasingly, Black men want to know how they can be allies to Black women.”

“I do not think our culture has truly embraced seismic change,” says Mayes. You can talk all you want about how we’re much more enlightened now about race and gender, Mayes suggests, but what ultimately counts is the power position of the accused and the accuser. The problem, she explains, is that “women of color don’t typically sit in seats of power and, therefore, their voices are rarely heard or represented in places where decisions are made.”

The fact is Hill would still be that lonely Black female figure facing a phalanx of (predominantly) White men. Of course, there are some changes—the Senate Judiciary Committee now has women and diverse members—but not enough to tip the scales.

Still, Hill might be accorded more respect today—at least the appearance of respect—by the powers-that-be. In fact,, I’d bet the White men on that committee might be super solicitous of Hill. Certainly, Specter wouldn’t be murmuring “this is not so bad” about her claims. And, as we all know, Biden finally apologized to Hill about how he handled the hearing—albeit 28 years later.

You could call all that progress. But it falls far short. Considering it’s been three decades since Hill’s explosive testimony shined a burning light on gender and race issues, it’s a bit dejecting to think we’d end up exactly where we are today—with Clarence Thomas on the Supreme Court.