Veteran women attorneys are jettisoning Big Law in favor of in-house jobs at a higher rate, an accelerating trend that hits top law firms at a time when they’re fighting to improve their diversity.

In 2021, only 35% of women who left one of the top 200 law firms in the US joined another Big Law firm, according to data from legal consultancy Leopard Solutions. Through the first nine months of 2022, that number has shrunk to 28%. Moving to in-house positions remains the most popular second choice for women who say that gives them more control over their careers.

LISTEN: Here’s how some attorneys and legal industry professionals would create a law firm that is equitable for both genders.

Women like Deborah Rimmler, general counsel at Sigma7, who made that jump, bristle at perceptions that those who left Big Law couldn’t hack the work or that families and jobs were too much to juggle.

“I’m working just as hard. I’m still working a lot of hours. It’s just a different kind of work. I’m back to overseeing the legal operations of a company in many different areas,” said Rimmler who left Dentons in August. “I might spend part of my time drafting some contracts and then I’m thinking about how do we set up our employment agreements and I’m going to deal with some foreign subsidiaries and you’re doing acquisitions so, I kind of like the variety of work that comes with in-house.” 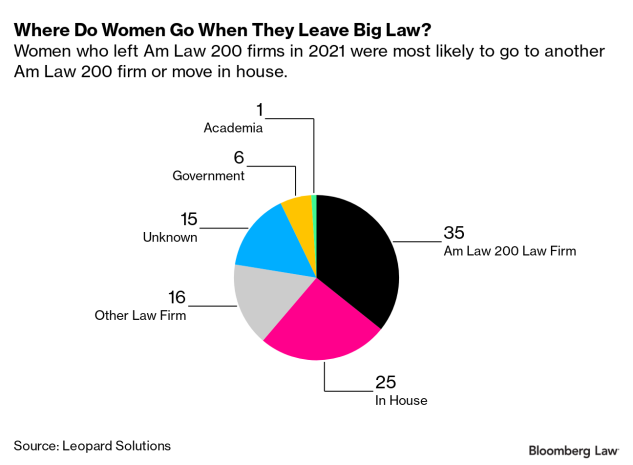 Big Law firms intending to improve their diversity need to consider the factors driving women away from their ranks, which may mean taking a harder look at how firms are structured and operate, said Sonya Olds Som, the global managing partner for the Legal, Risk, Compliance & Government Affairs practice group at executive search firm Diversified Search Group, which also places in-house attorneys.

“The war for talent will rage on because there are generational shifts happening in what people’s expectations are of the way they work and how they work and where they work and why they work,” she said. “This is going to continue to be a space in which in-house is generally more able to culturally be competitive. Whereas law firms tend to lag behind the rest of corporate America due to ingrained conservatism and risk aversion.”

One of the most common critiques of the Big Law business model cited by women who left is the aggressive push for billable hours. Difficult billable hour goals have historically been a reason why women have left Big Law.

Dionne Greene, senior counsel at Simon & Schuster Inc. who left Big Law’s Proskauer Rose in 2000, said moving in-house gave her the opportunity to be proactive versus reactive without pressure of billable hours.

“The hours to be billed, and therefore the money to be made, came due to emergencies. That’s when you really made your money because you had so many more hours,” she said. “So there was profit in chaos. So that created situations where you worked over the weekends, during holidays, very late nights or very early mornings. Because there’s a crisis and as a result, you had to throw a lot of people and a lot of time to solve it.

“If you were at Big Law, as a litigator, you seemingly went from crisis to crisis because that was the most profitable. If you were a good litigator, that was part of your strength, your ability to jump into something that was a total mess and sort it through and get the client confident in your abilities and create a game plan, but often out of chaos. For me, going in-house, I wasn’t averse to crisis management, but I wanted to be a player to help reduce the amount of crises that were popping up.”

Attorneys, especially women, also leave an Am Law 200 firm for an in-house role because the skills valued are vastly different, Olds Som said.

“The ability to bring in business and do business development and sort of navigate the law firm shark tank are things that Big Law values,” she said, adding that in-house jobs value emotional intelligence skills instead of just bringing in new business. “If you want to actually be valued for your ability to be a business counselor, to be a strategic adviser, to be a mentor and leader of other people and not just be valued as a revenue generating individual contributor, you will or probably have considered going in-house.”

In-house counsel also don’t worry about someone stealing their clients or not giving them client credit, which is a longstanding problem for women in Big Law, said Lauren Rikleen, president of the Rikleen Institute for Strategic Leadership, a consultancy group on workplace culture.

“You’re not fighting with somebody over client credit. You don’t have to worry that if you go out for dinner with a potential client and another person in your firm is going to try to take all the credit for bringing in that client’s work,” she said.

In-house opportunities will continue to be more competitive culturally in the talent war for women attorneys. Where Big Law culture is typically stiff and lags behind when it comes to change, in-house is more nimble, said Olds Som.

“As with other sea changes, like the industrial revolution, this shift is here to stay. This is a genie that’s not going to be put back in the bottle for anybody,” she said.