Editor’s Note: In our final news story for our Big Law & Pay Equity series, Meghan Tribe speaks with current and former women law partners about how firms can go about closing the pay equity gap with the use of third-party audits, by focusing performance reviews more on work product than personalities, and through other measures.

“I was a star associate, star partner,” said Brenda Feis, a former Seyfarth Shaw partner who left the firm and switched sides to represent employees suing for discrimination at her own boutique employment law firm, Feis Goldy. “But once I had kids—even though I was winning cases for clients—when it came time to pass those clients on because the senior partner was retiring, they went to a male. They didn’t go to me.”

To close the gender pay gap, law firms need to bring more objectivity into how they evaluate lawyers, including by turning to outside auditors to keep them honest, Feis and other current and former women law partners said in interviews. Firms should also have women involved in compensation decisions to ward off implicit bias.

In Big Law, the gender pay gap widens as lawyers climb the ranks at large firms, with women still struggling to get full credit for their work and being sidelined for having children.

Men and women start off on fairly equal footing in hiring and pay at many Big Law firms. The gap grows at the partner level, where women make up 22% of equity partners and earn only 78% of what men earn in those roles, according to a survey by the National Association of Women Lawyers.

Women often don’t get the same opportunity as male colleagues to land key client relationships, a necessity for top earners, according to lawyers and diversity advocates. They also may be evaluated based on archaic and subjective standards and have their compensation set by small groups of partners that often include few women.

“People want to be fair; they think they’re being fair,” said , former Greenberg Traurig co-president and founder of the Bass Institute for Diversity and Inclusion. “The more objective criteria we can show them that they’re, in fact, in practice not being fair, the more hope we have in eliminating the problem,” said Bass, who is also a former American Bar Association president. 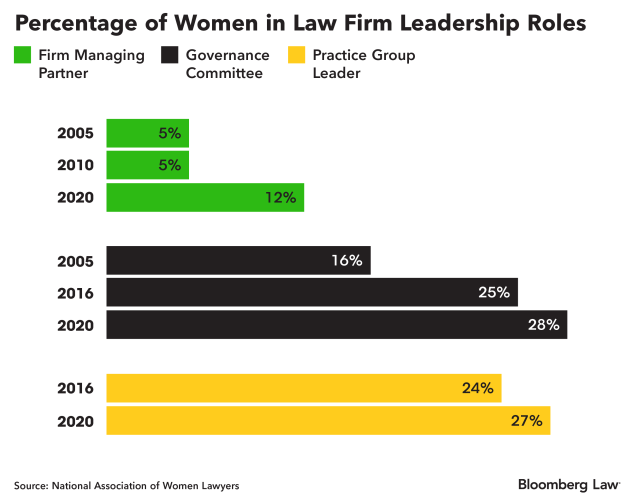 Pay inequities don’t usually arise on Day One of an associate’s journey in Big Law.

Men and women attorneys often start out on the same footing at the largest firms. Associates at most Big Law firms are paid in a lockstep system, based on class year.

“If you come out of law school, and you’re a first year, second year, third year, you’re coming in with your class of attorneys and, so, one would think that would eliminate inequities,” said Lori Andrus. The founding partner at Andrus Anderson has battled the likes of , , and Farmers Insurance Group over unequal pay claims by female employees.

Women made up nearly half (48%) of law firm associates in 2021, the National Association for Law Placement found in a recent report. That’s the highest percentage in the 29 years that NALP has been reporting data. Women accounted for more than half (55%) of all summer associates, which are feeder positions into Big Law, NALP found.

But as men and women move up the ranks, the share of female lawyers dwindles—and the pay gap expands.

Compensation starts to get impacted in the mid-level associate years, when some women decide to have children, said Feis, the former Seyfarth attorney. Since launching Feis Goldy in 2014, she has represented a number of women who have sued their Big Law firms.

If an associate reduces her hours or goes on part-time status during pregnancy or after giving birth, she might get taken off the partnership track, Feis said. A woman associate may also be moved into a non-track status associate or a contract partner position, a lower-paying job. This new path are often referred to as being placed on the “mommy track” in Big Law.

Even women who continue to work full-time after having kids have their commitment to making partner questioned, Feis said.

“I had clients who were full-time working their butts off, but people just assumed because they had kids—and they had pictures of their kids in their office, and maybe they would talk about their kids—that they weren’t as serious as their male counterparts,” she said.

As a result, women start to get fewer opportunities, Feis said, like working on big cases or getting face time with important clients. 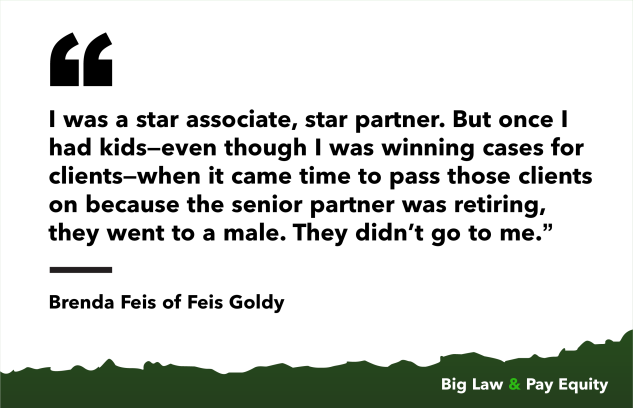 Much of a lawyer’s pay or bonuses come as a result of an annual review conducted by the firm, which can be another opening for bias.

“In Big Law, there’s a lot of anonymity,” Bass said. “People don’t really know what everybody has done, and so a lot is left to expressing yourself and describing what kind of a year you’ve had.”

Bass was appointed co-president of Greenberg Traurig in 2013 and spent more than 20 years on the firm’s executive committee. She left the firm in 2018 to found the Bass Institute, focusing on issues facing women and diverse lawyers in the workplace.

Women are historically much worse at self-promotion than men in Big Law, said Bass, who as ABA president led a study into why women in the latter part of their careers leave the legal profession. If a female lawyer is not talking about how great she is, Bass said, chances are no one’s going to hear it from anybody else.

Women are also criticized for being “too aggressive,” “too ambitious” or “too bitchy,” whereas men are more likely to be evaluated purely on their work product, Bass said.

Origination credit is perhaps the biggest factor in determining compensation and promotions at law firms. Pay systems are designed to reward lawyers who bring new clients in, both for the work they do and other business the client generates elsewhere in the firm.

Women are much less likely than men to be allocated some or all origination credit for projects they lead, matters they bring in, and work they expand for established clients, said Randi Lewis, a legal recruiter for Major Lindsey & Africa. That’s particularly true at top AmLaw firms where much of their work is for institutional clients where origination is held by a senior lawyer.

“The number one new question is on origination credit,” she said. “Not just for the client, but also for other clients.”

The pyramid structure at many law firms not only means fewer women partners, but also even fewer women in the leadership roles that handle compensation.

Women accounted for 12% of firm managing partners in 2020, according to NAWL. Roughly 27% of practice leaders were women, while women held 28% of roles on firm governance committees.

“If women aren’t the ones making the final decisions, if they aren’t on the compensation committee, if they aren’t in the senior equity partner ranks, then of course, you’re not going to see significant change, because you have this in-group bias,” Andrus said.

Women are often given leadership roles for recruiting, diversity and pro bono work instead of compensation committee seats, according to Lewis.

“That’s certainly great, but there’s really no impact in those positions on elevating women in the firm or elevating their compensation,” she said. 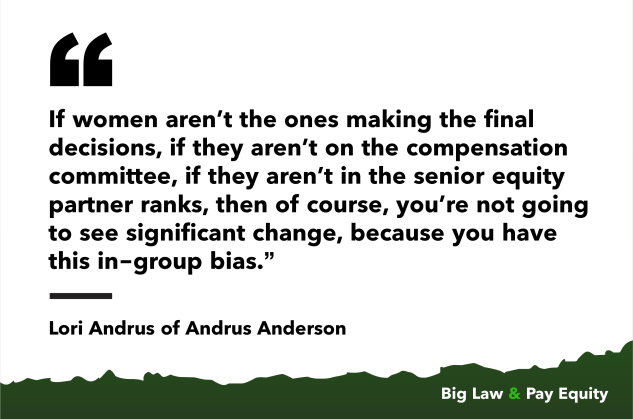 Bring in the Auditors

Law firms can work to close the gender pay gap creating more transparency in their processes and removing the taboo of discussing compensation, Andrus said.

“That secrecy really harms women,” she said. “If you cannot talk about pay, if you don’t know what your peers are making, you are powerless.”

, for example, found pay disparity between men and women at almost every level of the cloud-based computing company during a 2015 audit. The company has since done annual pay audits and spent more than $22 million on efforts to correct the discrepancy.

“Most responsible law firms have been and are looking at pay equity,” said Jonathan Segal, a labor and employment partner at Duane Morris in Philadelphia. “The question becomes: How they’re looking at it?”

Pay reviews can range from informal scans—looking for outliers at the high or low end—to more comprehensive formal pay equity audits in which a third party is hired to review compensation.

“What makes pay equity audits more complicated for a law firm would be the number of potential variables that would need to be considered and then what weight is given to those variables,” Segal said.

Origination is typically one factor. Others may include work for existing clients and reputational work like writing or speaking engagements. Although billable hours are often used to gauge productivity, lawyers in some practice areas may be able to charge a higher hourly rate than others.

“It’s more complicated and a lot of firms have formulas,” Segal said, “but often human factors will go into the formula to determine sometimes whether someone should make a little more or a little less.”

“Firms are focusing more and more on the systems that result in the ultimate pay decisions as much as the pay itself, and I think you have to do both,” he said.

“It certainly makes sense, for firms for any employer, to be self-critical and do periodic audits to say, ‘Where are we on pay equity?’” Feis said. “They may not even realize it’s evolved to a state where things have become unequal.”