It took almost two decades for female equity partner rates to creep up by a measly 6%. Forgive me for not holding my breath for a major breakthrough anytime soon.

When I started covering women in Big Law almost two decades ago, I thought female lawyers would bloom like wildflowers—everywhere.

Although female partners were like rare orchids in 2003—they constituted a scant 16% of all partners then, according to The American Lawyer—they seemed to have momentum on their side. We might not see a big jump in women partners in five years, I thought at the time, but probably in 10 years. And certainly in 20.

I was so wrong.

Today, women are nowhere close to the 50% mark for partners—equity or nonequity—in Big Law.

According to the National Association of Women Lawyers survey released in April that analyzed responses from 75 firms in the Am Law 200, women comprise only 22% of all equity partners. As disappointing as that statistic might be, keep this in mind: For a long time, it looked shaky whether women would ever break the 20% mark—and that didn’t happen until 2018.

And women didn’t progress that much in the less prestigious (and far less lucrative) nonequity partner ranks either. In 2005, women made up 26% of such partners, while today they represent 32%, reports NAWL.

We all knew that Big Law is a male dominated profession but did anyone expect this ridiculous pace of progress for women? 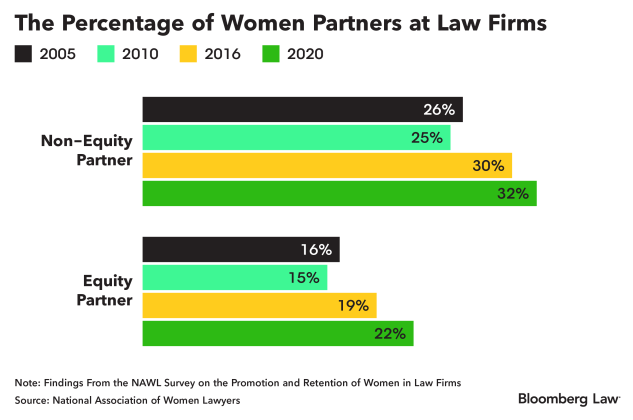 “I thought we would be farther ahead than 22% equity partners at this point,” said Yvette Ostolaza, who recently assumed the chair of Sidley Austin’s management committee.

“It’s not shocking because we have been monitoring the trend for the past 15 years,” said NAWL’s board president Jennifer Champlin. Yet, she called the pace of change, particularly in the equity ranks, “deeply disappointing.”

“If the equity partner rate is not going up, there’s a cap on how much women will make,” said Venable partner Elizabeth Manno, who co-chaired the NAWL survey. “Equity goes hand in hand with compensation.”

So how much do female lawyers lag behind? NAWL finds that in 2020, women only made 78% of what men do. Though the percentage of what women make relative to their male counterparts have fluctuated over the years, Manno said it generally “hovers around the 85% mark.”

But here’s what’s really deflating: Even women who make the steep climb to equity partnership aren’t catching up. The gender pay gap actually gets worse for every step that women ascend the ladder. NAWL finds that the compensation gaps “often grow as women and men advance to partnership with the largest gaps occurring between equity partners.” Not surprisingly, NAWL finds that men are almost invariably the top earner, with “women rarely breaking into even the top ten at the firm.”

Why are women so behind? And why is there a constant dearth of women at the partnership level?

One popular explanation is that women don’t stick around for the partnership contest because Big Law practice is exceedingly demanding and notoriously inhospitable to parents. Some experts, such as Joan Williams of University of California Hastings College of the Law, also point to the “motherhood penalty”—the assumption that moms are less dedicated to their jobs.

When it comes to the gender pay gap, “there are several culprits,” said Peggy Steif Abram, NAWL’s interim executive director. “It’s hard to name one ‘main’ factor.” The report focuses on compensation systems and performance reviews, as well as succession. In all of these areas, the report finds “subjective and opaque decision making processes. That is, processes that are more prone to bias.” 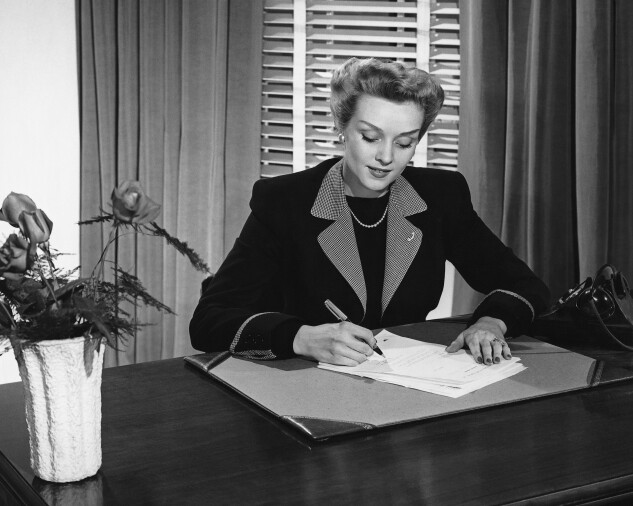 “All the issues in the NAWL report are relevant,” said Joyce Sophia Xu, who founded and now heads the global derivatives practice at Paul Hastings. She said women are often overlooked, citing herself as an example.

“No one mentioned the possibility of being a partner to me,” said Xu about her experience as an associate at Davis Polk & Wardwell where she started her career in 2000. “I didn’t have a mentor.” She added, “I didn’t think about making partner until I was a fifth or sixth year associate and billing over 3,000 hours a year. It was my father who said, ‘why not you?’ ”

But when she asked about partnership during her annual review at Davis Polk, she said, “the men reviewing me seemed quite shocked—and I had established a name for myself in derivatives and developed steady clients.” That became a moment of epiphany for Xu: “I woke up to fact that I could be a partner, so why was it so shocking to you guys?” (She later moved to Simpson Thacher & Bartlett where she launched its derivatives practice, making partner in 2010.)

An Onslaught of Litigation

Indeed, some women feel the system is rigged and have resorted to suing their firms for gender discrimination.

Among the most high-profile suits against Big Law in the last half dozen years or so was the one brought by Kerrie Campbell in 2016, then a partner at Chadbourne & Parke (now Norton Rose Fulbright). She alleged that the firm paid female partners lower salaries and bonuses, and that she was paid less than male partners who brought in less business.

It was a messy, acrimonious case in which the firm disparaged Campbell as a lousy lawyer, suggested she was wacky, then very publicly booted her out. (Bloomberg News reported at the time that the “firm’s five-member, all-male management committee had decided that she didn’t ‘fit’ at Chadbourne.”)

Miraculously, though, the case ended amicably in 2018 with successor firm Norton Rose agreeing to pay $1 million to Campbell, plus another $1 million to her two co-plaintiffs and another $1.08 million in attorney fees to Sanford Heisler Sharp, which represented the three women. Even more amazing, the firm issued a conciliatory statement in which it essentially thanked Campbell for raising its consciousness. The statement, as reported by Law.com, reads, in part: “Through the litigation process, Ms. Campbell contributed to important ongoing dialogue within the profession about gender issues. Chadbourne hopes and expects that Ms. Campbell will be successful in her future professional endeavors.”

Other cases brought by women against Big Law, however, concluded on a more ambiguous note. For instance, we don’t know much about the resolution of the case brought by a group of seven female associates in 2018 against Morrison & Foerster for discrimination against working mothers. (Sanford Heisler also represented the plaintiffs in that matter.)

This year, the last two remaining plaintiffs settled with the firm. (The plaintiffs had sought class action status. In 2019, however, five of the plaintiffs dropped their claims because of a possible settlement.) Though the terms for the last two plaintiffs are confidential, the parties did issue a joint statement this year that they all “agree that a commitment to supporting and promoting women and working parents is critical for today’s society.”

The ending of the case brought by six female associates in 2019 against Jones Day for discrimination was even more frustrating. The women, who were also represented by Sanford Heisler, had alleged that the firm’s “black box” compensation system discriminated against women.

Last year, however, they withdrew the case, stating that the pay data provided by Jones Day did not show widespread pay disparities. As I wrote at the time, we were left clueless as to what happened: “We don’t know if the women got a tidy sum to go away. We don’t know if Jones Day crushed the claims to smithereens and paid squat.” And there was no nice joint statement about how all parties support women.

(As of May 27, neither MoFo nor Jones Day had responded to my more recent requests for comment.)

Given the ambiguity of the settlements—and we don’t even know if there was one in the Jones Day scenario—it’s hard to determine how much these cases cost the firm. Do these suits make a difference in the general fight for gender equity? Or do firms just think of them as curios with no relevance to their own situation?

“I don’t know about Jones Day but generally I know our lawsuits have made a difference,” says David Sanford, whose firm has become the go-to counsel for women suing Big Law for discrimination. “It shakes up the executive board and management committees. I know there’s been a major impact at some firms.”

Campbell said that lawsuits like hers have an impact: “I believe we’ve seen an uptick in women’s pay, partnership and promotion to leadership positions in BigLaw as a result of high-profile gender discrimination lawsuits,” she wrote in an email in May. She added that she knew her lawsuit was “risky,” but “I had no doubt that litigation was the right thing to do at the right time. I had no doubt that we would prevail—and we did in more ways than I can say!”

Whether law firms are quaking in their boots and taking action to improve the gender pay gap because of these lawsuits is hard to say.

And though firms have implemented in compensation and promotion, it’s anyone’s guess whether gender parity is a top priority.

VIDEO: The two most important pay discrimination laws - the Equal Pay Act and Title VII of the Civil Rights Act - have been around for more than six decades. Yet, the pay gap persists. We examine why.

In the meantime, we are left reading the tea leaves about the future of women in Big Law. So is there any reason to believe that female equity partner rates will now rise at a steady clip?

Ostolaza said she’s hopeful: “I am very encouraged by the promotion announcements during the past year,” noting the new crop of female partners and leaders in the profession. She added, “we are headed in the right direction in terms of reflecting our law school female graduate pool.”

Sounding a bit less bullish is Roberta Liebenberg, a former chair of the American Bar Association’s Commission on Women in the Profession: “I am cautiously optimistic that meaningful change is now within sight.” A long time champion of women in the legal profession, Liebenberg has seen ebbs and flows in women’s progress throughout the decades.

But Liebenberg stressed that the current demand for talent might be changing the power dynamics for women. “The red-hot lateral market enables women who feel they are underpaid to more readily secure higher-paying jobs at other firms.” She added, “our research found that disparities in compensation, bonuses, and the allocation of origination credit were a primary reason why senior women lawyers voted with their feet by leaving their law firms.”

Let’s hope she’s on the money. Because I don’t want to report that the female equity partner rate finally hit 28% in 2042.