hired the private intelligence agency Black Cube in 2017, a witness at his rape trial testified, a move prosecutors said was designed to spy on his accusers and kill news stories about him.

Dev Sen, Weinstein’s former lawyer at , testified on Thursday that the fallen Hollywood power broker had entered into a contract with Black Cube, but that was about all the judge let him tell the jury at the New York trial. Weinstein long employed and his firm to represent him on a host of issues, including negative press.

Before Sen’s testimony and outside the jury’s hearing, prosecutor Joan Illuzzi and Weinstein’s lawyers conferred with New York State Supreme Court Justice . Burke asked what Sen would say on the stand and about a series of contracts Weinstein had with Black Cube. Illuzzi said Weinstein had a July 2017 contract with the agency to investigate people including the actor , who testified a week ago that Weinstein raped her in the early 1990s. 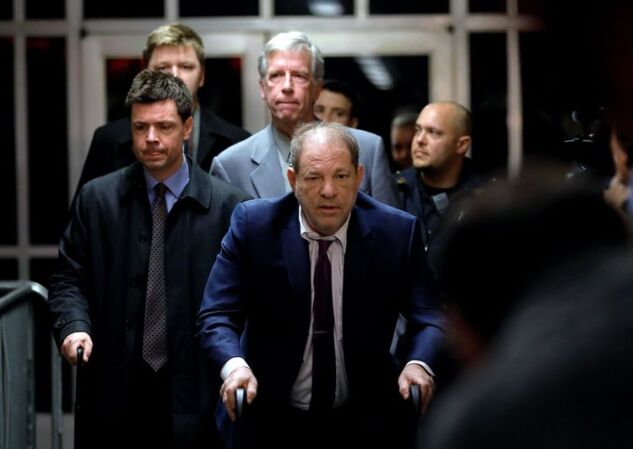 “In the contract with Boies Schiller, Mr. Sen will testify, one of the members of the research team -- one of the intelligence officers -- would be an investigative journalist as per the client’s request” to “contact the people he was interested in investigating,” Illuzzi said.

The New Yorker’s Ronan Farrow has reported that Black Cube, operated by former Israeli spies, had investigators pose as journalists to contact actors, including Sciorra. Sciorra testified last week that she was contacted in 2017 by a man named Seth who claimed to be a reporter for the Guardian writing about the movie industry in the 1990s. She said she never returned his calls, emails and text messages.

Weinstein is charged with rape and predatory sexual assault and could go to prison for the rest of his life if convicted. He maintains that any sexual encounters were consensual.

Illuzzi argued Weinstein made it clear to Black Cube what he wanted it to accomplish. The agents tried to get the women to tell them their allegations and then worked to undermine news stories about the producer or prevent them from being published altogether, she said. Black Cube would be paid a $300,000 “success fee” if a story was killed, Illuzzi said.

Sen, who helped negotiate the Black Cube contract, was barred from reading or describing the contract to the jury of seven men and five women, though Burke said they will be allowed to read excerpts of it later in the trial.

When the jurors returned to the courtroom, they were allowed to see Sciorra’s name highlighted in red on a list Weinstein had emailed a Black Cube official the month he hired the agency.

“Red flags are the ones of interest,” a note to the investigators reads.

Leaving court, Weinstein was asked why he hired Black Cube.