U.S. and Texas flags are pictured.
Photo by: Cooper Neill/Bloomberg

Vinson & Elkins, one of the largest law firms in Texas, is giving $1 million to the University of Texas School of Law in a push to increase diversity in the legal industry.

The funds will help pay for free bootcamps and workshops that target Texas high schoolers, prospective law students at universities, and current University of Texas School of Law students who are low-income, first generation, or from an underrepresented racial or ethnic demographic.

“This is about increasing accessibility and reducing or minimizing some of the obstacles,” said Milam Newby, a mergers and acquisitions partner at the Houston-based firm. The goal is “that the legal profession as a whole reflects the diversity of the great state of Texas.”

Diversity in the legal industry has remained low despite the efforts of law firms, in-house legal departments, and advocacy groups to reach parity.

In 2020, nearly 89% of law firm partners were White and 74% were male, according to the Minority Corporate Counsel Association’s 2021 law firm diversity survey. In 2010, White lawyers comprised more than 93% of all partners and men made up more than 80% of that group.

The Vinson & Elkins funds will be used for what the University of Texas School of Law calls the Pipeline Program, said Nicole Simmons, the Austin, Texas-based school’s director of pipeline outreach and development. “The Pipeline Program is the law school’s commitment to supporting aspiring lawyers,” Simmons said. 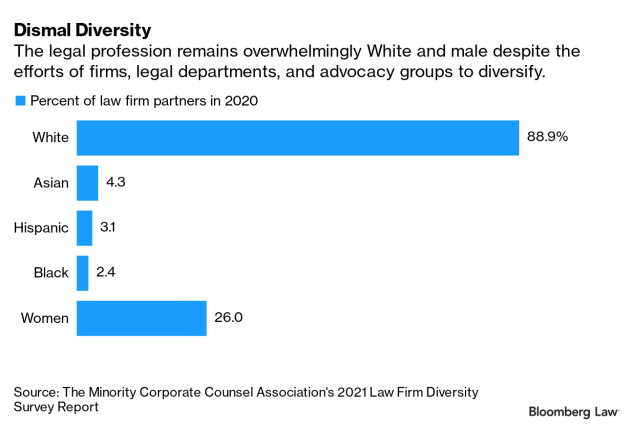 The University of Houston has awarded more than $5.4 million in law school scholarships to more than 300 pipeline students, and UCLA’s Law Fellows program was launched in 1997, according to their websites.

Vinson & Elkins, founded in Houston in 1917, is one of the largest firms in the U.S. with more than $782 million in gross revenue, according to AmLaw data.

Some firm attorneys, in addition to current Texas School of Law students, will serve as mentors to participants in the University of Texas’ Pipeline Program, Simmons said.

Other offerings in the Pipeline Program will include LSAT test preparation and scholarship support, she said.

“We know that for many applicants, particularly if you’re looking at diverse applicants, the LSAT can be a point at which applicants are shut out of admission,” Simmons said. “Those preparation programs are very expensive. For likely all of the students who will be part of our program, this would be cost prohibitive.”

“We share a responsibility to achieve equality,” Newby said. “Increasing the diversity of the profession is essential to the legal industry as a whole.”

“As a leader in this profession,” he said, “this is an opportunity for us to step up and put our money where our mouth is, and to make a real positive impact, and initiate the change.”

Vinson & Elkins currently offers diversity fellowships to law students across the country, which includes $25,000 and a summer clerkship. The firm also established a Scholars Program in 1990 that provides $10,000 scholarships and summer internships to high school students from underrepresented backgrounds.

The Pipeline Program will hold its first day-long bootcamp in February, barring any Covid-related delays. Applications for its first year-long prospective law student cohort will open in March.