Major UK law firms taking the competition against US rivals stateside are falling short in one important category: profits.

“It’s been a challenge,” said Brian Davis, a legal recruiter for Major, Lindsey & Africa, referring to efforts by UK firms to compete in the US. “By most measures, they are not as profitable by a significant margin.”

Four of the UK’s five “Magic Circle” firms—a nod to their elite pedigrees and top-shelf clients—have already updated their pay structures to attract rainmakers as they look to expand stateside and fight off growing competition from US firms on their home turf.

Freshfields, Bruckhaus Deringer has been the most aggressive of the group, landing heavyweight lawyers from top-flight US firms and launching a bustling office in Silicon Valley. Others, like Allen & Overy, have explored mergers with US firms and brought over experienced lawyers from Europe.

The profit differentials limit what they can do to consistently and successfully compete for talent with the country’s leading firms.

Freshfields led the Magic Circle in average partner profits last year, according to data self-reported by four of the five firms.

Allen & Overy and Linklaters each saw single-digit profit gains over the year. Slaughter & May did not publicly report its profits and revenue. 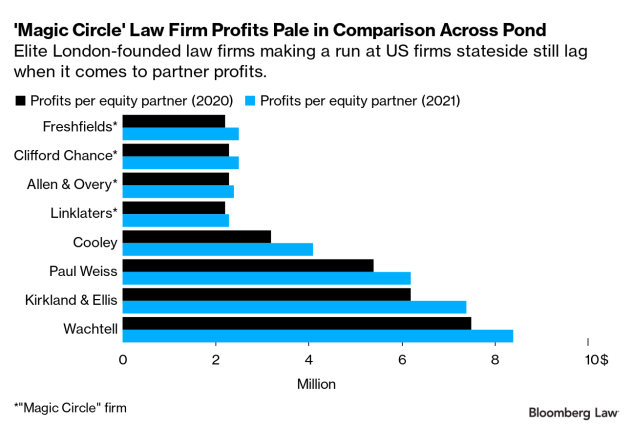 Direct comparisons to US firms are difficult because fiscal years and exchange rates vary. Still, 23 firms with significant operations in the US crossed the $4 million mark in profits per equity partner last year.

Murkier is how much the British firms are earning for US work. Allen & Overy and Clifford Chance said stateside business accounts for about 13% of total revenue at each firm, but Freshfields and Linklaters didn’t provide a breakdown.

‘Playing Our Own Game’

Lawyer pay has been a stumbling block for UK-founded firms looking to vacuum up big-name talent in the US.

UK firms have responded by loosening or even jettisoning strict “lockstep” compensation systems in which partners are paid solely based on seniority. The moves are designed to lure—or keep—top-dealmakers with lucrative client rosters.

“The Magic Circle firms realized they needed the US market because it is the largest by far, and there is more legal spending here overall than in any other,” Kent Zimmermann, a law firm consultant for Zeughauser Group, said in an interview.

Freshfields “has been the most active and spent the most money in the last year, hiring highly compensated people in M&A, private markets and private equity,” Zimmermann said.

The firm has had six straight years of revenue growth. It’s not deterred by the prospect of an economic downturn, according to its leader.

“We’re playing our own game,” Georgia Dawson, the firm’s senior partner, told Bloomberg Law. “We’ve got a long-term vision, and we’ve built our footprint on that.”

The firm is focusing on M&A, capital markets, antitrust and other regulatory work, as well as litigation and white collar matters, Dawson said.

A&O’s decision to relocate Karen Seward, its global head of litigation, from London to the firm’s Silicon Valley office is a signal of its commitment to competing in the states, according to House.

“We’ve brought on nearly 50 partners in the last two years, a significant number of whom are lateral, in our primary practice areas,” he said. “Our core principle is to do something in the US which we are already doing elsewhere at the firm. We are trying to make a one-stop shop globally. But we came to the US to have deep roots in the domestic market, hence the hiring of a number of US lawyers.”

Neither Quick Nor Bloodless

The migration of top-drawer British firms to the American market has not been quick or bloodless but unfurled over decades starting in the 1970s.

Clifford Chance took it up a notch with a 2000 merger—the first between major US and UK law firms —with white-shoe New York firm Rogers & Wells to create a global legal juggernaut.

The firm quickly moved to the West Coast, opening offices in San Francisco and Los Angeles, but closed the outposts within a few years after some three dozen partners defected. Clifford Chance blamed lower-than-anticipated profits from a securities litigation group poached from San Francisco’s Brobeck, Phleger & Harrison, which folded in the wake of the dot-com collapse.

Magic Circle firms have since fine-tuned their approach, again migrating to the West Coast for tech, life sciences and other lucrative work.

“We’re moving ahead,” said Alan Mason, Freshfields global managing partner for the US, “with hiring, expanding practices, not exactly looking at new offices—but who knows. There’s no reason to change our growth.”