The Office of the Comptroller of the Currency has announced 15 anti-money laundering enforcement actions so far this year, triple its total for all of 2017 and increased penalties from $1 million to $137.9 million.

The ramped-up enforcement — against institutions including U.S. Bank and Rabobank — show that Bank Secrecy Act/anti-money laundering compliance remains a top priority as the OCC has transitioned to new leadership under the Trump administration.

Bank secrecy and anti-money laundering deficiencies are regarded by the OCC to be “one of the most significant risks facing banks today,” Peter Hardy, a partner at Ballard Spahr LLP in Philadelphia, told Bloomberg Law. This year’s uptick in enforcement activity “could reflect the OCC reacting to those concerns with concrete action,” he said.

The bulk of the fines levied by the OCC this year for BSA/AML violations were borne by three banks. The regulator announced a $75 million fine against U.S. Bank, a unit of U.S. Bancorp, on Feb. 15. It unveiled a $50 million penalty earlier that month against Rabobank of Roseville, Calif. In April, Bank of China’s New York branch was fined $12.5 million.

The OCC has chided banks for such issues as failing to adequately investigate questionable activity related to law enforcement subpoenas or having inadequate transaction monitoring.

Some of the OCC’s 15 enforcement actions this year were legacy issues. For instance, individual officers of Merchants Bank, a Carson, Calif., lender that closed in 2017, were fined in a series of actions for failing to correct past BSA/AML violations.

The OCC’s vigilance predates the Trump administration. For the past several years, the regulator has warned institutions to fully account for the hazards of new products or technologies, as well as any significant increases in transaction values and growth in numbers of risky customers.

Thomas Curry, an Obama appointee who ran the agency for five years, told U.S. branches of foreign banks in 2015 their greatest challenge was BSA compliance. The agency took 10 enforcement actions that year for BSA/AML violations, followed by nine in 2016 and five in 2017, according to Bloomberg Law’s OCC Enforcement Tracker. 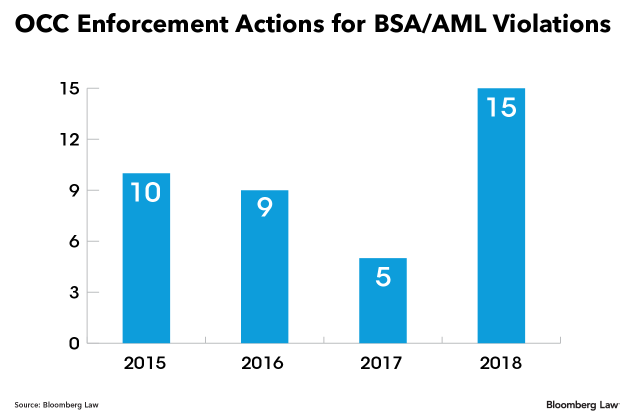 Drawing conclusions about enforcement based on numbers year over year is tricky, according to Deloitte’s Fred Curry. Regulatory actions are often a culmination of years of investigation and field work, he told Bloomberg Law in an email.

Still, the increased enforcement by the OCC suggests financial institutions “need to keep their foot on the gas in their own compliance efforts,” said Curry, who is Deloitte Risk and Financial Advisory’s U.S. anti-money laundering and economic sanctions leader.

To contact the reporter on this story: in Washington at jbater@bloomberglaw.com

To contact the editor responsible for this story: at mferullo@bloomberglaw.com