Law school dean once was a dream job for attorneys who prefer the ivory tower to the daily grind of billable hours. These days, the position is more like being chief executive of a sprawling business than a tweed-clad dispenser of constitutional wisdom.

“My job has radically changed,” said Marc Miller, who has served as the University of Arizona’s law school dean for nearly a decade.

The school—ranked in the top 50 by U.S. News—is among those that in recent years have expanded beyond the traditional juris doctor education program for college grads. It now also offers an undergraduate law degree, both on campus and online, as well dual JD/PhD and JD/MBA programs, legal training for foreign diplomats and education for alternative legal service providers.

The growing offerings from the University of Arizona and other law schools are aimed at bolstering bottom lines after a dip in enrollment and amid uncertainty posed by the Covid-19 pandemic. Those factors have also changed the role of law school dean, increasingly to focus on making sure cash continues to flow in.

“Law schools are less siloed now,” said Daniel Rodriguez, the former dean of Northwestern University’s law school, noting the increased integration of law schools with their universities. “Even if you are an A-list law professor, there is no substitute for financial acumen.”

“We have a business to run,” he added.

The shift can be traced to the Great Recession, when shaky job prospects began to scare students away from law schools and heavy tuition debt.

Enrollment plunged by 30% between 2010 and 2015, reducing aggregate tuition income for schools by nearly $1.5 billion along the way, according to research by Jerome Organ, a law professor at University of St. Thomas School of Law.

The numbers later ticked back up and flatlined for several years. The total of new students entering law schools in the fall of 2021 ticked up 2.3% over 2020 but still far below the peak of nearly 148,000 law school students in 2010, American Bar Association data show. 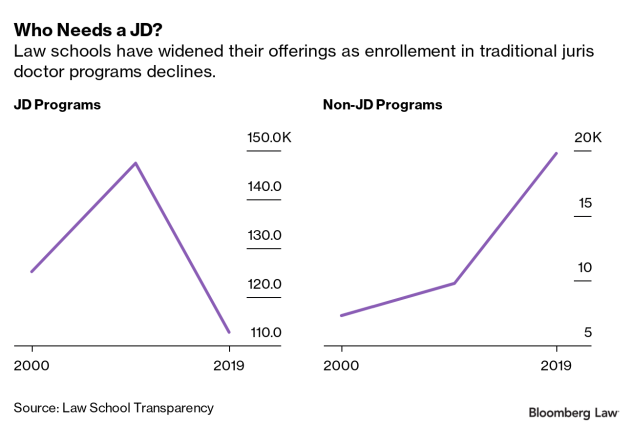 Unexpected strong demand during Covid led to robust lawyer hiring in the past two years. But job prospects have begun to soften this year, raising concerns about future law employment and dampening prospects of law school enrollment returning to earlier highs.

That has law schools—there are about 200 accredited by the American Bar Association—and their deans looking for other sources of revenue. Fundraising, once largely a matter of renaming buildings after generous donors, has broadened out to a near full-time activity.

“There has been a proliferation of non-JD programs at law schools,” Rodriguez said. Enrollment in non-JD programs has soared, from 76% in 2014 to more than 21,000 currently, according to the American Bar Association. 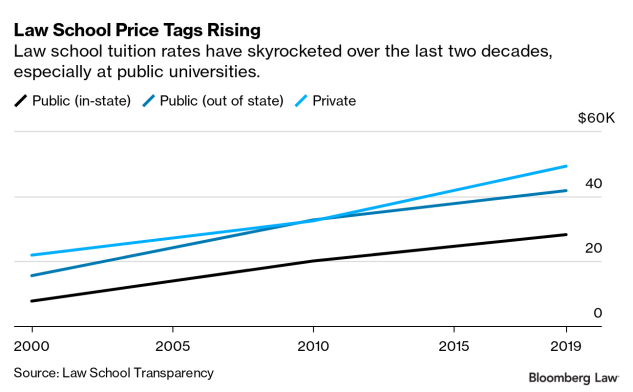 Garry Jenkins arrived at the University of Minnesota in 2016 to take over as the law school’s dean. Jenkins, who had executive suite experience and had worked for major law firms Wachtell, Lipton, Rosen & Katz and Simpson Thacher & Bartlett, said he came aboard as the school was grappling with a major hit to its $54 million operating budget from declining enrollment.

“My first task was to turn the finances around and to deliver fast,” Jenkins said, in an interview. “We had to bring a strategy that a CEO would bring to a corporation because we are a large institution with significant finances.”

He oversaw a cadre of distinguished teaching peers, but his main job was scrambling to turn around the school’s deficit.

The school’s financial problems were well-known: The public university system is funded by taxpayers and subject to debate in the state legislature. Minnesota was among the states where lawmakers started questioning using public monies to fund graduate professional education. 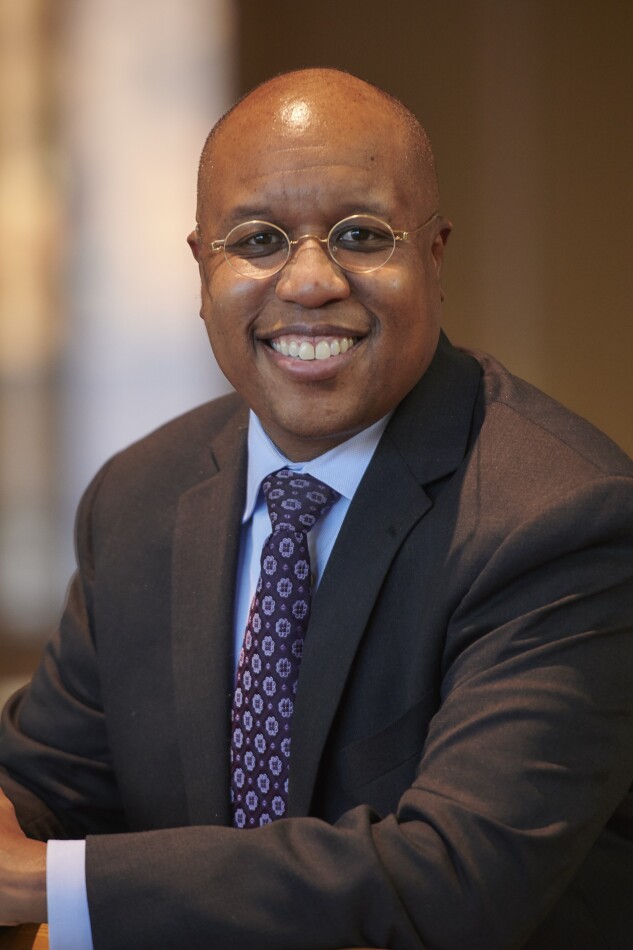 Jenkins, who earns a little more than $391,000 annually, according to Minnesota state public records, had been a Goldman Sachs Foundation COO and general counsel. That gave him financial chops not typical of many law school deans, who often are promoted from administrative or teaching ranks and earn a median $310,600, according to salary.com

The school rolled out some new programs, including a master’s program for students looking to become patent agents and a popular law minor for undergraduates, he said.

After he took over as Pepperdine University’s law dean, Paul Caron said his top job duty became finding ways to fill the enrollment gap. First-year enrollment at the school dropped in the mid-2000s from about 210 students to 160 students annually, he said.

The school scored a lifeline from alum Rick Caruso, a real estate developer who is running for mayor in Los Angeles. It was renamed for Caruso after he pledged $50 million to Pepperdine in 2019.

To boost enrollment, the school also temporarily lowered admissions standards. It has since developed online and master’s programs to keep tuition money coming in.

Caron also wanted to teach, but the former tax law professor said he quickly realized that was unrealistic.

“It almost killed me because of the demands on my time to run the school,” Caron said of the one time he tried to teach during his tenure. “I can handle budgets, but I woefully underestimated the time needed for fundraising.”

(Corrected to reflect that the University of Minnesota's law school budget is $54 million.)