won Michigan and Wisconsin Wednesday, putting him on the brink of taking the White House from President , hours after the president’s team opened legal fights to stop vote counting in at least two states.

Both CNN and NBC projected Biden would win Michigan, which Trump took in 2016, giving him 264 Electoral College votes out of the 270 needed to win the presidency. Trump has 214.

Biden needs only to win an additional outstanding state, such as Nevada where he is leading, or Georgia, where his campaign believes absentee votes will push him over the top.

Biden said he expects to prevail. “I’m not here to declare that we’ve won, but I am here to report that when the count is finished, we believe we will be the winners,” he told reporters in Wilmington, Delaware. 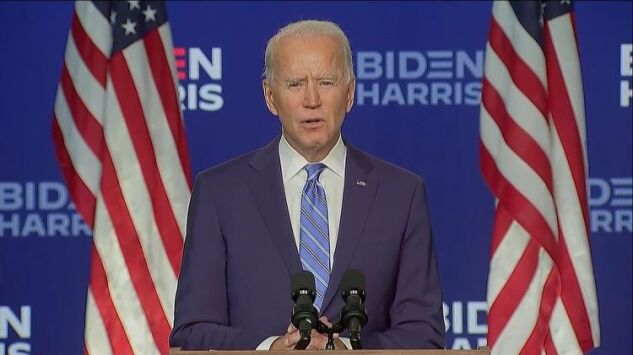 His remarks came after he scored a win over in Wisconsin, closing off one of the president’s best routes to re-election.

Trump is cutting into Biden’s lead in Arizona’s Maricopa County, even though the Associated Press already projected the former vice president would win the battleground state. Election officials released more results overnight that showed Biden leads in the county by about 75,000 votes – or 52% to 47% -- after roughly 63,000 more ballots were reported. He had earlier led by 85,297. State-wide, Biden is ahead by about 69,000 votes.

The county still has about 300,000 ballots left to count, according to the Maricopa County Elections Department. Maricopa County, the state’s most populous, plans daily updates at 9 p.m. Eastern Time until all remaining ballots are reported.

Tensions were high in downtown Phoenix Wednesday night as protesters supporting Trump gathered outside the county ballot tabulation center and the Arizona State Capitol to demand their votes be counted. The elections department tweeted that that employees will “continue our job, which is to administer elections in the second-largest voting jurisdiction in the county.”

Trump’s campaign said it is suing in Pennsylvania and Michigan to halt vote counts that have been trending toward Biden.

Trump falsely declared victory in Pennsylvania, one of the six states that has yet to be called by the Associated Press. The president was ahead in the state by 383,000 votes but Pennsylvania officials said more than a million ballots still have to be counted.

Trump faces a more difficult path to victory. Trump would have to win all the battleground states that have not yet been called.

Biden’s Wisconsin and Michigan victories reverse Trump’s upsets in 2016 when he defeated .

Trump’s campaign said it would demand a recount in Wisconsin, where the candidates were less than 1 percentage point apart.

Biden’s campaign said it expects to be able to declare overall victory Wednesday afternoon, sooner than many expected.

Election officials continued to count votes in several battleground states as Democrats, whose expectations for a “blue wave” were dashed.

Trump tweeted throughout the day casting doubt on the count of mail-in ballots, which were heavily Democratic, after the Election Day in-person votes were counted, which leaned Republican.

“How come every time they count Mail-In ballot dumps they are so devastating in their percentage and power of destruction,” the president said on Twitter. Another tweet mused about his leads “magically” disappearing in states run by Democratic governors. 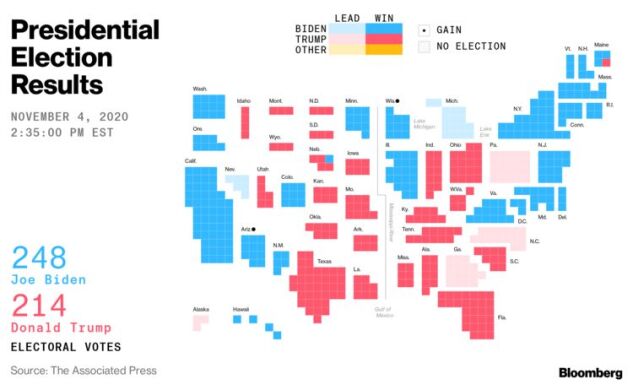 , Trump’s campaign manager, insisted the president was headed for re-election and that the campaign was readying its lawyers to challenge results in some states.

In a middle-of-the-night speech from the White House, Trump threatened to ask the U.S. Supreme Court to intervene to stop what he called the disenfranchisement of Republican voters, without offering evidence that any wrongdoing had occurred.

“Frankly, we did win this election,” Trump said, noting that he held a lead in a number of states where results were still uncertain. “So we’ll be going to the U.S. Supreme Court. We want all voting to stop.”

It wasn’t immediately clear what Trump meant, as states including Michigan, Pennsylvania, Georgia, North Carolina and Nevada were counting legally cast votes. It is routine for states to continue counting votes after Election Day, and Pennsylvania said results likely wouldn’t be finalized for several days.

U.S. stocks held onto their gains after the news, led by technology shares, on speculation that a split Congress would ensure the extension of key elements of the bull market, such as Trump’s 2017 corporate tax cuts. Treasuries also rallied. 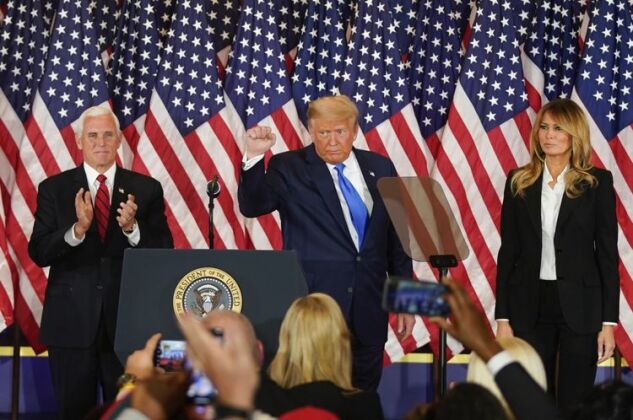 The unresolved outcome -- due to an unusually large number of mail-in ballots because of the coronavirus -- risks stoking tensions further in the U.S., beset by an economic downturn and the raging virus.

But the Biden campaign was optimistic of the outcome and slammed Trump’s efforts to halt vote counting.

“When all of the votes are tallied, we are confident that Vice President Joe Biden will be the next president of the United States,” said Biden campaign manager .

O’Malley Dillon said in a statement early Wednesday that Trump’s remarks were “outrageous, unprecedented and incorrect” and “a naked effort to take away the democratic rights of American citizens.”

In Nevada, where tallying was halted until Thursday, Biden was clinging to a lead of almost 8,000 votes. In the nationwide popular vote, Biden leads by roughly 2 million.

There were few surprises among states where the Associated Press announced winners, with Republican and Democratic states generally falling in line, despite expectations for several upsets.

Trump won Florida, a crucial prize in the race to the White House that closed off Biden’s hopes for an early knockout in the election. The president also won Texas, which Democrats had hoped might flip and entirely reshape the electoral map.

Trump won Ohio and Biden won Minnesota, states that each candidate had sought to take from the other but wound up politically unchanged from 2016.

Trump still holds small leads in North Carolina and Georgia, though there are votes outstanding in each. Trump won both states in 2016. But Trump’s lead in Georgia was narrowing Wednesday evening.

Even if Democrats yet claim the White House, a wave of support they hoped would also give them control of both chambers of Congress may fall short.

Democrats would need to win three of the five Senate seats still undecided to leave the Senate with a 50-50 split, which would leave the party in the White House in control.

Biden’s lead appears to be thanks to holding onto Latino and African-American voters in numbers similar to what Clinton had four years ago. And he narrowed Trump’s margin among White voters, voter surveys from the AP show.

Trump had a 12-point lead among White voters in Tuesday’s election. Network exit polls four years ago showed him with a 20-point advantage among those voters. Biden led among Latino voters 30 points, Black voters by 82 points, and women by 12 points.

(, the founder and majority owner of Bloomberg LP, the parent company of Bloomberg News, provided $100 million in support of Biden and his running mate in Florida, half of that from his Independence USA PAC.)

(Updates with count in Arizona in sixth paragraph. An earlier version of this story corrected the ninth paragraph to remove language about the first Republican wins in Michigan and Wisconsin.)