spent decades at the top of the New York legal profession, making millions defending Wall Street banks and global corporations. But the 63-year-old had to leave his elite law firm to find the biggest case of his career -- investigating and his company.

Before becoming Manhattan District Attorney ’s general counsel shortly after Trump’s 2016 election, Dunne was a senior partner at , one of New York’s most prestigious -- and profitable -- law firms.

Dunne, who declined to be interviewed for this story, cuts an unusual figure in an office full of hard-charging, ambitious young prosecutors. The white-shoe lawyer’s mild-mannered demeanor may make him the perfect person to take on Trump’s vitriolic claims that the probe is corrupt and totally biased against him. 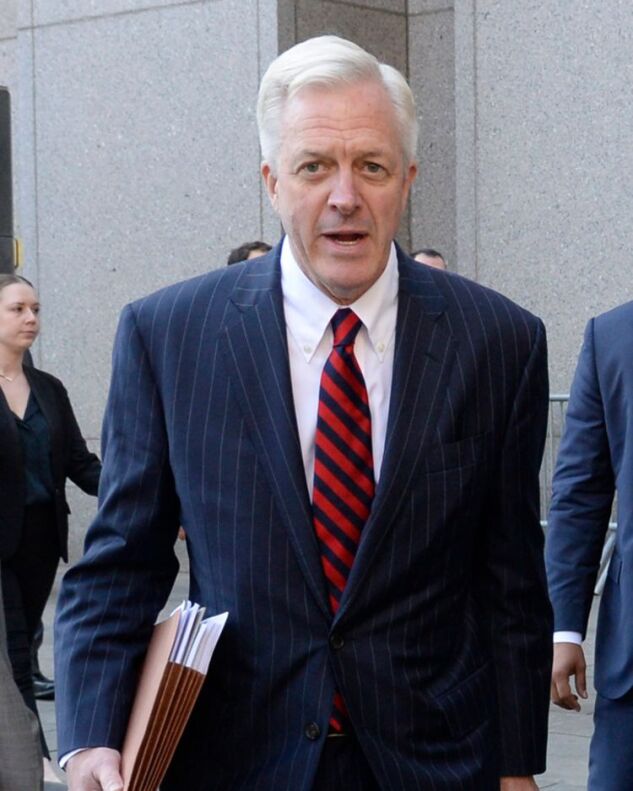 “This investigation, which is ongoing, has been thorough, careful and proper, and has been limited to subject matters within our New York jurisdiction,” Dunne addressed the court at the July 1 arraignment of the probe’s first defendants, the itself and longtime Chief Financial Officer .

“Politics has no role in the grand jury chamber, and I can assure your honor that it played no role here.”

Weisselberg and the company pleaded not guilty to charges that they avoided taxes by paying the CFO and other executives “off the books” with lavish perks including housing and cars. The indictment could raise pressure on Weisselberg to cooperate with prosecutors in a more expansive case against the company and possibly a historic and politically charged prosecution of a former president.

Noted Supreme Court litigator said Dunne was the right lawyer to convince judges that the probe by Vance, a Democrat, wasn’t politically motivated.

“Carey has never been seen as someone involved in politics, but as leader of the bar and of a law firm whose partners reflect a range of perspectives and party affiliations,” said Dellinger, who advised Vance’s office when Trump went to the Supreme Court to try to block a New York subpoena of his tax and financial records.

Dunne, an Upper East Side resident, is a registered Democrat and his occasional campaign contributions have mainly gone to Democrats, including and New York Senator .

Vance isn’t seeking re-election, and a Weisselberg trial won’t take place before he leaves office in January. The likely next district attorney, Democratic nominee Alvin Bragg, has said he doesn’t plan to change staffing on the Trump case, but it’s still not clear if Dunne will be part of the team prosecuting Weisselberg and the Trump Organization at trial. He was the main speaker at the July 1 arraignment and appeared for Vance before the Supreme Court last year.

At the Supreme Court, Dunne faced Trump lawyer and then-U.S. Solicitor General , who argued Trump’s accountants shouldn’t have to comply with Vance’s subpoena because the president deserved immunity from investigations that might subject him to the “local prejudice” of the nation’s 2,300 district attorneys.

Dunne reassured the justices that Vance’s subpoena of Trump’s taxes wasn’t “born of any political animus or intent to harass.” He then pointed out that the then-president was asking the Court “to overturn 200 years of precedent by declaring he has a blanket immunity while in office from any legal inquiry, even for his prior private acts.”

The court agreed with Dunne in a 7-2 decision.

Dunne’s experience at the highest levels of legal practice also means he can’t be cowed by any defense lawyer, no matter how famous. That’s a reversal of the situation that often confronts local prosecutors charging wealthy clients able to afford legal “dream teams.”

And , a former New York judge, said Dunne’s many years as leader in the New York legal community, including as president of the city bar association, had earned him a lot of good will.

“He has tremendous charisma, but it comes from years of devoting his energies to help the bar, and the court administration,” said Kamins. “He’s built up tremendous credibility with everyone. He’s a genuinely decent guy, a nice guy.”

Though he has had the most public role to date, Dunne is hardly the only prosecutor attached to the Trump investigation. Earlier this year, Vance also brought aboard , a former federal prosecutor turned corporate litigator at , as special assistant district attorney on the case. Pomerantz was also in the court for the July 1 arraignment. Other prosecutors there included Solomon Shinerock, James Graham, Julieta Lozano, Gary Fishman, and Christopher Conroy.

But Vance has a unique bond with Dunne. The two first met as young prosecutors in the Manhattan district attorney’s office, which Dunne joined right out of Harvard Law School in 1984.

Dunne went to Davis Polk in 1987, where he was mentored by legendary litigator . Over the years, Dunne rose to become head of the litigation department and a member of the management committee. The firm’s average partner compensation of $6.35 million was second-highest in the nation last year, according to the American Lawyer magazine.

He followed Fiske’s example of combining private practice with public service. Dunne’s hailed as his proudest moment not any of his Wall Street work but his pro bono defense of Bronx resident Lonnie Jones, who was retried on murder charges after a Davis Polk pro bono team managed to overturn his previous conviction.

“I am confident that I won’t be able to top this in my career,” Dunne told the Village Voice after he won an acquittal for Jones in 2007.

Along with lucrative work for corporate clients like and , Dunne served as president of the New York city bar association and also led several initiatives aimed at improving the New York state court system. Dunne was behind a proposal that led New York to create “drug courts” for low-level and first time offenders that went on to become a model for other states.

Like Fiske, who once ran marathons, Dunne was known at the firm for his fanatical workout regimen. He also had a reputation for being quick with a joke and playing the drums -- barefoot -- for a Davis Polk rock band. The Objections had the groan-worthy motto “a rock band whose appeal can never be denied.”